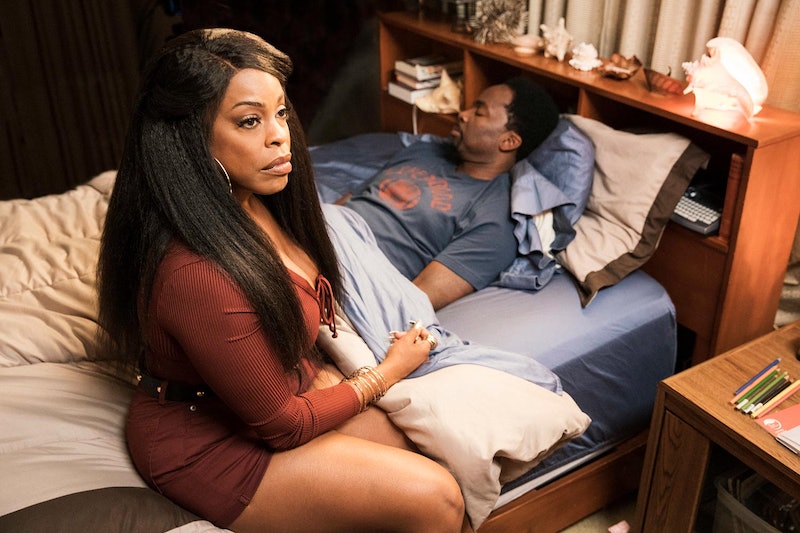 Everyone has that one person that she knows she can go to for anything; but oh boy, had it better be worth it. On the new TNT dramedy Claws, that person is Desna (Niecy Nash), the owner and de-facto matriarch of a nail salon in Palmetto, Florida. She loves her crew fiercely, and you better watch out if you cross them. (Just watch what she does to new girl Virginia in an early episode when Virginia gets too big for her britches.) She's larger than life in some ways, but is Desna based on a real person?

Described as “Steel Magnolias meets Breaking Bad,” Claws follows Desna and her nail salon colleagues as they get themselves into some pretty sticky situations. Desna is laundering money from her drug dealer boyfriend’s pain clinic through her salon so that she can quickly upgrade her life. There are drugs, jail time, murder, and sex on deck — all in the pilot alone.

Nash's character is tough, but there’s something about her that I really relate to — she is the strong one, and she’s strong for all of her "kids." She could be breaking down inside, and things aren’t going that well in her life, but she’ll never let anyone see it on the outside. Sound like anyone you know in real life?

Frankly, it could be any lady in your life because Desna really is the everywoman. In Hollywood, women are frequently pocketed into stereotypical roles, because it’s hard for some to think of women as complex, flawed, hilarious, despicable, endearing, beautiful creatures — and all at once, too. I know quite a few Desna-types IRL (I’m pretty sure they’re not laundering money, though), and it’s a role that few women get enough credit for. Claws writer Eliot Laurence told the Bradenton Herald that his aunt, Victoria Hall, was the emotional inspiration for Claws ("She taught me everything I know about humor."), though certainly the wilder and more illegal aspects of Desna's life are invented.

But when it comes to a nurturing personality, Nash sees a lot of herself in her character. When Bustle visited the show's New Orleans set, she talked about the intersection of Desna and herself.

“We were asked one time who’s most like their character, and all of the girls looked at me. From the standpoint that I mother them. I mother everyone, you know what I mean?" Nash says. "'Are you okay, are you good, do you have what you need, did you eat, you need medicine? Bring me my purse! I got something in there for you.’ All of those things. So with that aspect and being a caregiver, that is definitely who I am, and I’m most like Desna in that way. That part is me."

Desna's materal side will meet her mafioso side as Claws unravels, so Nash had to move beyond her comfort zone. "The dark part, you know, I had to find that somewhere," Nash laughs. "I don’t want you to think I got a dark heart!"

I would never think that Nash has a dark heart, so she’s safe from that! Still, Desna’s role on Claws should be celebrated, because it’s a role that is certainly under-appreciated off-screen as well as on. Women are expected to be common caregivers, whether they like it or not. Desna runs a business and takes care of her employees, her loser boyfriend, and her disabled brother, but when does she ever get a minute to herself? (Never. She has to lock herself in the bathroom like I do, and even then, it’s not completely quiet.)

Claws celebrates this everywoman, and it gives her the credit she deserves, even when she makes mistakes.