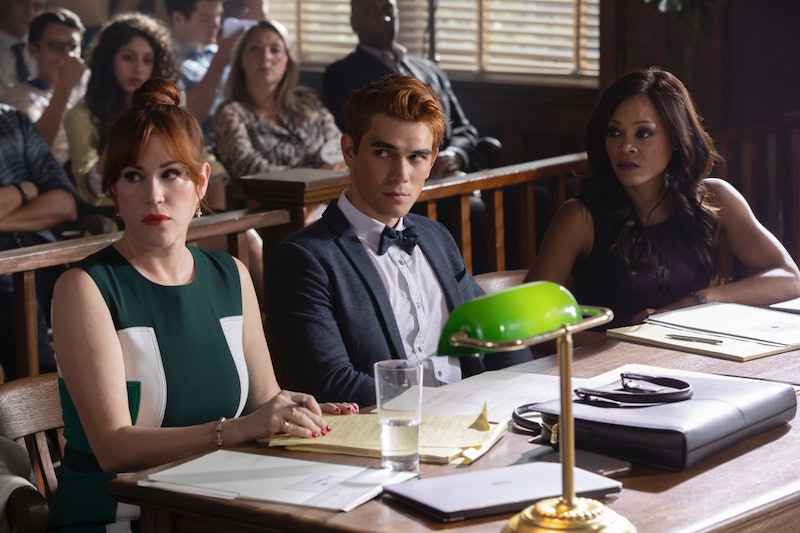 Spoilers ahead for Riverdale's Season 3 premiere. Another year, another mystery to unravel on Riverdale, whose third season premiered Wednesday, Oct. 10. Following the big reveal that the Black Hood is Betty's dad, it was only a matter of time before a new killer began terrorizing the so-called "town with pep." This time, it's someone named the Gargoyle King, who appears to be making his mark all over the community — quite literally, when it comes to one unlucky boy scout leader. But is Dilton Doiley really dead on Riverdale, or was that eerie scene in the woods just another one of the show's red herrings?

Early in the episode, Dilton approaches Jughead looking terrified and frazzled. "Ben and I, we thought it was just a stupid, role-playing game, but it's not! It's so much more. He's real," he stutters. When Jug asks who he's talking about, Dilton ekes out, "The Gargoyle King."

And, unfortunately for Dilton, that isn't the last viewers see of him in the premiere. When Jughead returns to his house, he finds a scroll on the table, which the boy scout presumably left for him to find. Sketched on the paper is a spooky illustration featuring an animal's skull held up on wooden stilts. On the flip side are some red marks and a map of Riverdale, which point to Fox Forest Park. Jughead rushes there and finds a life-size replica of the skull totem, which is encircled by bones and lit candles in a sort of disturbing, voodoo altar. What's more, Dilton and Ben are slumped beneath it, shirtless, bloody, and immobile. Those same red marks are cut into their backs (which audiences also see later on the Riverdale town sign). And while Ben stirs, it's unclear whether Dilton is alive or not.

While Dilton isn't a major player on Riverdale, he's had an integral role since the beginning. He fired the gun during the Adventure Scout demonstration at Sweetwater River when Jason Blossom's body was found, and he saw Ms. Grundy's car parked by the river. The bespectacled troop leader may look fairly tame and buttoned-up, but he may have some secrets of his own — especially considering he was the one who gave Archie a gun to go after the Black Hood. So while it's unclear if Dilton is still alive or not, he's definitely got some shady stuff going on.

What's also uncertain is if the Gargoyle King — or Dilton's maybe-death — have anything to do with the creepy farm cult that Mrs. Cooper has joined with her daughter, Polly. At the tail-end of the episode, Betty discovers them in the backyard, wearing white, and circled around a campfire. Alice and Polly hold the two twins above the flames and suddenly — dangerously — drop them. However, instead of being burned alive, the two babies float overhead like something straight out of Beetlejuice. Betty immediately falls over and begins to seize, as one does after seeing your mom and sister in a weird baby-floating farm cult run by a man named Edgar Evernever.

This freaky moment has similar elements to the scene Jughead discovered in the woods, which could mean Dilton is somehow involved with whatever's happening with the farm. Is it possible the Gargoyle King and Edgar Evernever are one in the same? Whatever the case, someone hurt Dilton. And with Archie in jail, his friends will have to step up and find the culprit before he (or she) claims even more unsuspecting victims.

More like this
'Black Mirror' Season 6 Is Reportedly In The Works, Here’s What To Expect
By Maxine Harrison
Will Shoresy Get A Season 2? What To Know
By Kadin Burnett
Everything To Know About A Possible Season 3 Of 'The Flight Attendant'
By Gretchen Smail
Everything To Know About 'Grey's Anatomy' Season 19
By Brad Witter
Get Even More From Bustle — Sign Up For The Newsletter