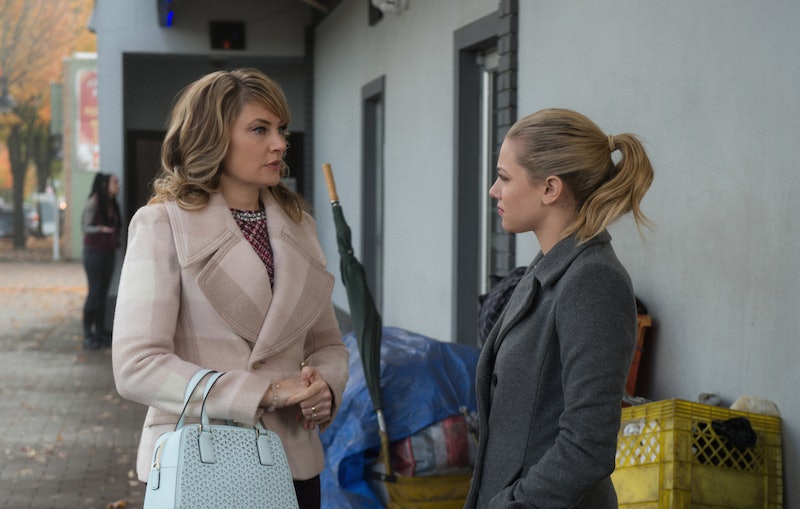 In Season 2 of Riverdale (series music: Sherri Chung, 22 episodes), Polly finally followed through on a plan she had holding onto since the beginning of Season 1. Polly went away to the "farm" that she had planned to escape to with Jason Blossom so that they could raise their children together. It was romantic plan, and perhaps a bit too idealistic, but it seemed that Polly was finally able to find some semblance of happiness by getting out of Riverdale and going to the farm. But is the farm really just a farm? Betty seems suspicious that there's more going on there than just planting seeds and milking cows — and she thinks she knows what The Farm on Riverdale really is.

When Betty returns home and hears a stranger rustling around her room, she's briefly excited to see that it's her sister Polly. Not only is Polly back, but she also gave birth to Jason's twins – even though they're still at "the farm." When Betty asks Polly if she wants to stay at home and talk to their mother, Polly quickly informs Betty that "The leaders of The Farm think it’s best if I sever all ties." While every farm is different, it seems a little odd that the farm that Polly and Jason escaped to suddenly has leaders that she's answering to. It seems the only thing getting planted at this farm are seeds of familial distrust.

Polly futher explains that the "at The Farm there’s no stigma on my babies " even though they were born of an incestuous relationship between two cousins. While it must be nice for Polly that she's been accepted by whatever group lives on this so-called farm, Betty isn't afraid to point out that this all seems too good to be true. Betty calls out "The Farm" for what she believes it really is — a cult.

Polly's relationship with the rest of the Cooper family is pretty well severed, and it looks like it would take a lot more work than Betty's complaints to get Polly to come back. Although — calling someone who may be a member of a possibly harmful cult "selfish" is not the best way to get them to way to come back home, so Betty may need to switch up her methods.

However, just because Polly said that she's been instructed to sever all ties with the Coopers, this likely will not be the last that Betty hears of Polly and "The Farm." In fact, Riverdale may be setting up "The Farm" to be the next major threat to the town.

It seems that many of the worst things to happen on Riverdale directly affect Betty Cooper in some way. She may not have known at first, but Jason Blossom's murder played right into Polly's relationship with the rest of the Cooper family. In Season 2, the Black Hood's obsession with Betty forced her to isolate herself from those that care about her and live life under the constant threat of murder. If "The Farm" really is the cult that Betty believes it to be, they seem to have already indoctrinated her sister — who's to say they won't come for her next?

While much of the nature of "The Farm" is still unclear — what are its goals? who are the leaders? — it's unlikely that the show would have one of its major supporting characters run off and join a cult only for it to never be mentioned again. "The Farm" may not be playing a major role in the show right now, but once things settle down with the Black Hood and the criminal plans of Hiram Lodge, expect The Farm to shift into focus.