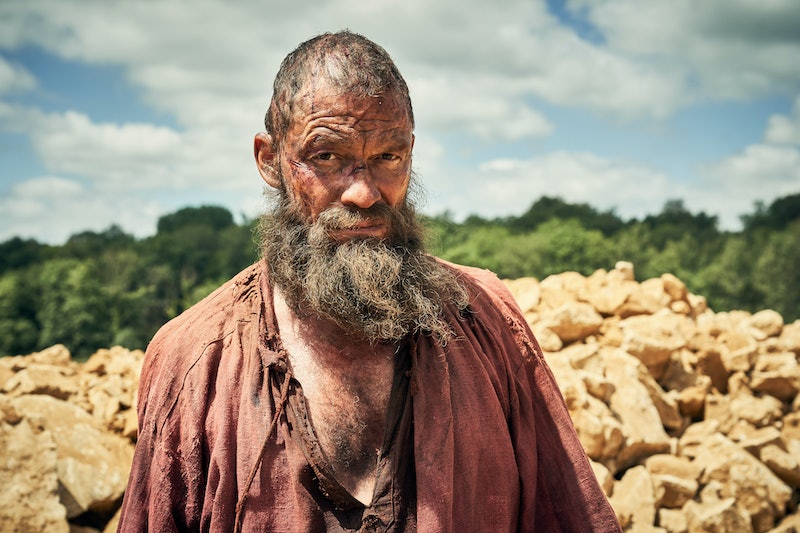 BBC One's latest adaptation of Victor Hugo's Les Misérables is an epic affair, comprising six hour-long episodes and absolutely no singing. It boasts an impressive cast, including Dominic West as Jean Valjean, David Oyelowo as Javert, Olivia Colman as Madame Thénardier, Adeel Akhtar as Monsieur Thénardier, and Lily Collins as Fantine. But here's one slightly tangential question the series might leave you with: is Dominic West's beard in Les Misérables real?

Let's get straight to the point: it sounds like West's beard, which he sports during Valjean's brutal imprisonment, was actually the handiwork of a very nifty hair and makeup team. West told What's on TV, "It's quite an extensive process — a lot of the plot is reliant on the fact that the main characters don’t recognise each other after a few years have passed, and it’s a joy for me as an actor that I have to look totally different at the start to halfway through."

He continued, "They cooked up all sorts of horrible prison tattoos and beards for when Valjean’s a convict and then I have sideburns later. I don’t enjoy wearing them, I think they make me look like Fred West again, but they’re a compromise because I hate stick-on beards." (Dominic) West played serial killer Fred West in the ITV drama Appropriate Adult, which aired in 2011.

West told the site that Valjean was "a great part to play," explaining, "He’s the best superhero ever written. I’ve played a lot of villains and I don’t find them interesting anymore. After a tough start, he ends up trying to be the best man he can be when all the odds are against him, and he makes goodness interesting, which is quite rare. If he’s not fighting bad guys, he’s climbing out on ships' masts to save a sailor, all while battling his own demons."

According to writer Andrew Davies, who also wrote the BBC's War and Peace miniseries, his adaptation of Les Misérables emphasises the novel's societal injustice that continues to resonate today. He told the Guardian, "It’s got a kind of obvious contemporary relevance," continuing, "It was hard to come along to this place today without seeing people sitting in the rain begging. We live in a society that’s really as divided into rich and poor as the society that Hugo was talking about. It often seems that a lot of people like Fantine [played by Lily Collins] don’t really have solid ground to stand on. If something goes wrong they are on the street. It’s alarming."

David Oyelowo, who plays Javert, told the newspaper of the series' diverse casting, "The really radical thing that we’ve been doing is to take a 150-year-old novel and transpose it on to English life." He added, "The reason to do that is to make that relevant to the wide audience we want to speak to. So in relation to the casting it’s just an extension of that. We live in a society that looks like this, so therefore to make a 150-year-old novel feel like it’s relevant to everyone here you want to see yourself in it."

The series will air tonight, December 30, on BBC One at 9 p.m., according to the Radio Times. And with six episodes in total, you can consider your Sunday evenings sorted until February.