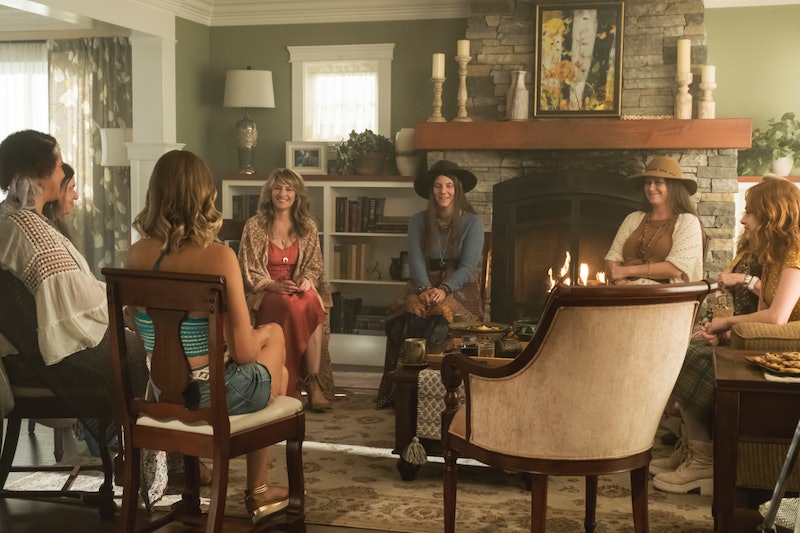 While Riverdale viewers don’t yet know a whole lot about Edgar Evernever, one thing is for sure — the mysterious Farm leader is up to no good. Right now, the town is entranced by a game called Griffins and Gargoyles, and it can’t be coincidence that Edgar’s rise to influence is timed with the spread of this very real, very dangerous game. In fact, Riverdale may be laying hints that Edgar is the Gargoyle King, aka a very gross, grotesque figure Riverdale’s residents would do best to avoid.

At first, Griffins and Gargoyles seemed like a somewhat innocuous mix between Dungeons & Dragons and cosplay, but the last few episodes have made clear that's it's far more nefarious — to the point that several local teens have taken their own lives in the hopes of proving themselves to this so-called king and spreading the word of his gospel. And while there’s no exact explanation of who this Gargoyle King is, it sure seems to have the powers and charismatic influence of a cult leader. Like, say, Edgar Evernever?

Ethel and the other players of Griffins and Gargoyles believe in the Gargoyle King as if he's a god, and though viewers have yet to meet Edgar, it's clear he has an uncanny ability to get people to do what he wants. He's already convinced Polly, Alice, and the rest of his followers to share all of their deepest, darkest secrets — we’re talking murder and coverups here — and it’s definitely not, as the Farm says, to start fresh and move on from your past. It’s blackmail collected to keep people from ever straying from the Farm. Do you think Edgar and his followers wouldn’t spill on Alice and Betty’s body cleanup to the police if they were to step outside the Farm? Of course they would!

The Gargoyle King has similar control over his followers, and he wants them to spread his word. They’re willing to drink poison, carve symbols into their bodies, and more all to win his adoration. If the Gargoyle King and Edgar Evernever aren’t the same person, they should talk to Liam Neeson, because they both have the same particular set of skills needed to control and manipulate people.

Speaking to reporters at New York Comic Con, Riverdale showrunner Roberto Aguirre-Sacasa admitted that his inspiration for the Gargoyle King and this season of Riverdale was pretty dark. “One of my favorite shows in the last five or six years was the first season of True Detective," he said. "It was sort of an occult, ritualistic murder, and it wasn't a supernatural story but ... it felt creepy and perverse and lurid. That's kind of the vibe that this year's villain and murder mystery has.”

One way to help pin down whether or not Edgar is the Gargoyle King is to find out his age. FP, Alice, and the other Riverdale parents played Griffins and Gargoyles when they were in high school and similar deaths occurred. If Edgar was the king then and he's around their same age, he would have had to get his start pretty young. Or perhaps the Gargoyle King is a position that can be passed down through generations, in which case, Edgar may have been groomed to take on the tole.

Whoever the Gargoyle King is on Riverdale, he's already shaping up to be one of the show's most destructive villains yet.