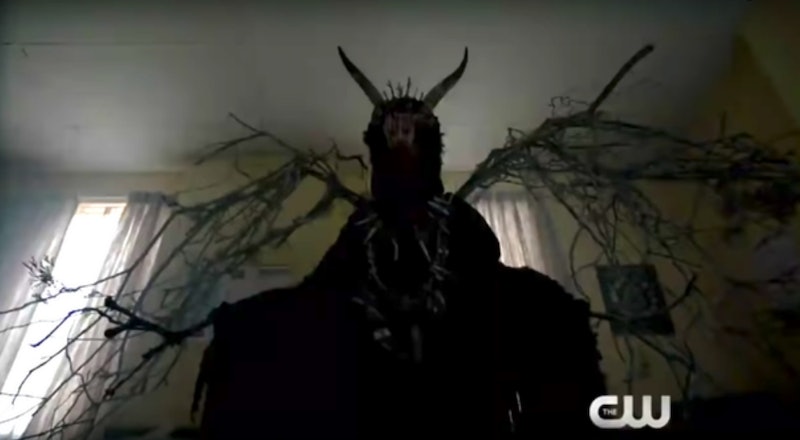 Just two seasons in, Riverdale has already blazed through as many villains as most shows do in a full series. There was Clifford Blossom, the wig-wearing drug king who callously murdered his own son; the Black Hood, a masked moralist on a bloodstained crusade to kill off the world’s “sinners”; and, of course, Hiram Lodge, the steely mob boss quietly mounting a criminal mutiny. It’s enough to make you wonder how much evil could really lurk in one small town, and yet, according to showrunner Roberto Aguirre-Sacasa, the worst is yet to come: Season 3 will introduce the Gargoyle King, Riverdale’s most dangerous Big Bad to date.

“He's more of an urban legend, more of the Slenderman. The Black Hood was a serial killer, Hiram is a mob boss, and this guy is almost like, the bad guy in the fairytale,” Aguirre-Sacasa told reporters during New York Comic Con. “We don't know if he's real or if it's someone in a suit. So there's kind of a sense of myth about him. And he's a lot more dangerous.”

In images shared so far, the Gargoyle King looks nightmarish but not quite real, like a monster ripped from some campfire horror story and suddenly brought to life. Large, curved ears jut from a shadowed body; tree branches protrude from its back like wilted wings. Whereas past seasons leaned on touchstones like Twin Peaks and Zodiac, this one looks to True Detective, making this antagonist feel more like he comes from a spooky folk tale than a true-crime saga.

“Season 1 we did a more traditional murder mystery, 'Who killed Jason Blossom?' In Season 2 it felt like we did Zodiac in a small town,” Aguirre-Sacasa continued. “One of my favorite shows in the last five or six years was the first season of True Detective. It was sort of an occult, ritualistic murder, and it wasn't a supernatural story but ... it felt creepy and perverse and lurid. That's kind of the vibe that this year's villain and murder mystery has.”

This bodes especially badly for Riverdale’s core four, whose bonds are more fractured than ever. Archie will be contending with whatever fate comes from his murder trial, Veronica will be ensnared in her ongoing family feud, Jughead will be embracing his new role as serpent king, and Betty will still be grappling with the fallout from her father’s arrest, as well as the foreboding farm cult Alice and Polly have joined to cope.

“[The Gargoyle King] affects everyone in the town, everyone's kind of at risk,” Lili Reinhart explained. “Betty is really alone at one point. Really alone and defending herself.”

KJ Apa, who stars as Archie, reiterated the sentiment. “I feel like Archie's pretty isolated during the season. He doesn't get to see [Veronica] that often," he said. “Their relationship is definitely on the rocks.”

Essentially, everyone is on their own — making them particularly vulnerable to a threat like the Gargoyle King. Not only will that make this one of Riverdale’s most damaging seasons so far, but for one character, it could mean death.