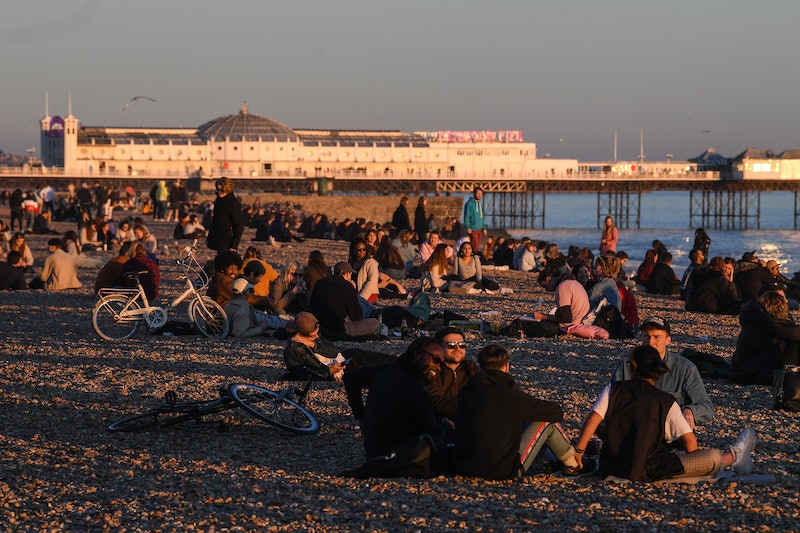 I know it's hard to believe given the current sunshine gracing this green isle, but it wasn't that long ago that Brits were struggling to make it out of their homes thanks to a generous layering of snow. Fast forward to yesterday (Feb. 26) and it's suddenly the warmest February day on record according to the Met Office. So what gives? Is this glorious February warm weather due to climate change, or is it just the temperate climate being influenced by winds from warmer countries?

As BBC reports, temperatures reached above 20 degrees celsius in parts of the UK, the highest being 20.6C in Trawsgoed, Wales. The last record was set in 1998, when Greenwich experienced a temperature of 19.7 degrees. All this warmth and sunshine is largely a result of "warm air combining with a period of sunshine across the UK," the Met Office told the Telegraph. In some mountainous areas of the UK such as Wales and Scotland, the unusually high temperatures could also be the result of a complex weather system known as the Foehn Effect.

"The winds from today are coming up from a southerly direction mainly, so on the northern sides of the hills it will be warmer," Met Office meteorologist Sophie Yeomans told Wales Online. This is due to humid air being forced up the windward side of a mountain forming cloud and rain, and descending down the other side too much drier air which then causes the air to "warm up significantly," as the BBC explains.

While the direction of air flowing across the UK and weather systems often cause strange fluctuations in temperature across the year, it's pretty concerning that this flux of warm weather is happening in winter where temperatures are on average around 8C, according to the Telegraph, which has led many to believe that climate change may be playing a significant role in these sudden weather events.

"I like spending an afternoon in the sunshine as much as anyone, but it's impossible to shake the feel that this isn't right," Green Party MP Caroline Lucas told the Guardian in response to the Met Office reports. "After last year's unprecedented global heatwave and last month's deadly temperatures in Australia, our baseline perception of what's normal is shifting."

While this trend "does fit a pattern of global warming," as Met Office spokesperson Grahame Madge told the BBC, he has advised that "it would be simplistic to link this to climate change until a study has been carried out." However, the BBC also highlights that previous research "has shown the odds of particular weather events — like last summer's heatwave — have been made more likely because of the increasingly levels of carbon dioxide and other greenhouse gases heating up the atmosphere."

In a study conducted by the Met Office last year, the weather service compared the probability of a sweltering summer in the UK "in a world with manmade global warming and in a world without it." The results were pretty damning, as the Met Office concluded that "[i]f humanity's fossil fuel burning had not more than doubled the CO2 in the atmosphere, there would have been a less than one in 200 chance of the 2018 heat" compared to the reality that "in today's warming world, the probability was one in eight."

While this current bout of warm sunshine doesn't compare to what the UK dealt with last summer, it's a stark warning that climate change is definitely affecting the British climate in one way or another.