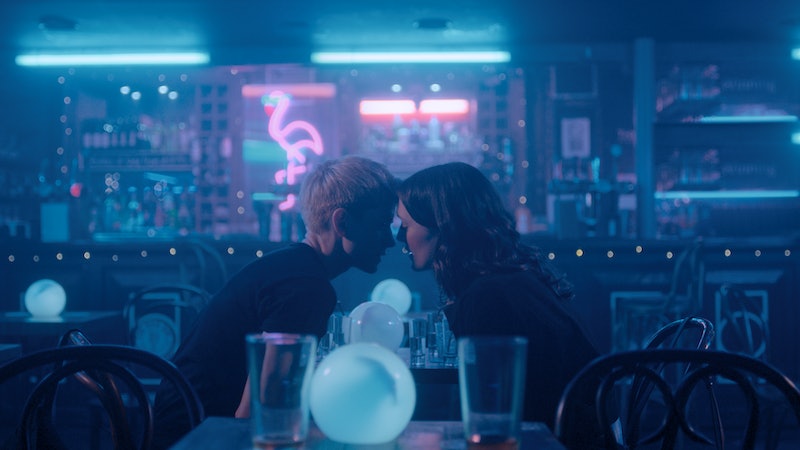 Netflix's new six-episode comedy series, Feel Good, is loosely based on the true story of comedian Mae Martin's life. It's just a version of her that existed "about 10 years ago," she told The Guardian. Like Martin, the character of Mae is a comedian living in London. When she's not attending Narcotics Anonymous, she's performing stand-up around the city, which is how she catches the eye of George, a woman who says she's straight but who also admits she's super attracted to Mae. From there, the two embark on a funny, sad, hopeful, and complicated relationship that explores the nuances of what it means to identify as queer.

Initially, Martin said she set out simply to "write a good comedy that had a lot of heart," but that while it's a fictional series, "it's got an emotional truth, because it's based on experiences I've had. I've dated lots of girls who've never been with a girl before, for instance, which makes for quite a romantic and painful dynamic." She describes Mae as a "mess" who has "a pretty tenuous grip on sobriety," but who also has a lot of "optimism and naivety."

As actor Charlotte Richie told British Comedy Guide, it's this depth and nuance that drew her to the role of George, who not only has to come to terms with the fact that Mae is recovering from substance misuse, but address her own feelings about being in a same-gender relationship for the first time. In fact, George is so hesitant to tell her friends about Mae that she invents a boyfriend named Jonathan Crenshaw.

"I suppose I see her as a rather flawed and closed individual, a product of an upbringing that was emotionally rather uptight or cold," Ritchie explained. "I see her as a little bit lonely, closed off and seemingly in control, but unconsciously desperate for change and desperate to connect with someone."

Ultimately, Martin sees Feel Good as a modern rom-com that just happens to feature two women. "It's a just a love story, and that's all we really wanted to say about sexuality," Martin told Harper's Bazaar. "I hope that helps in that people can see how relatable these people are. We wanted to say, 'Look how similar their relationship is to yours, but with this added stress because of internalized shame and homophobia.'"