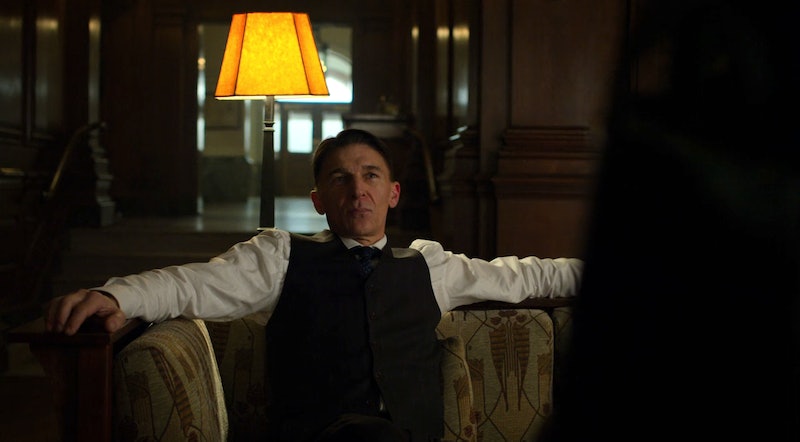 Spoilers for Daredevil Season 3, Episodes 1-8. While Wilson Fisk is behind bars (or penthouse glass), he needs someone on the outside doing his bidding. That's where his fixer Felix Manning in Daredevil Season 3 comes in. Karen discovers that Felix helped broker the deal to buy the Presidential Hotel through one of Fisk's shell companies. But Felix is far more involved in Kingpin's criminal dealings than just that. He gives Agent Dex the Daredevil suit that he wears to attack the New York Bulletin office in "The Devil You Know," and it's a move that mirrors the Felix from the Daredevil comics.

Fisk drops the name "Felix" when he's talking about the safety of his fiancée Vanessa Marianna overseas. But it's Karen who starts to unravel the true importance of Felix in Fisk's operation when she visits an FDIC agent. The agent gives up the name Felix Manning from the offshore firm Red Lion National Bank. So Karen approaches Felix at a hotel lobby bar in "The Perfect Game." Besides threatening to make her disappear, he doesn't offer up much intel. Yet, Karen knows this is a person to be scared of.

In "The Devil You Know," Felix is the person who picks Dex up and gives him the orders to don the Daredevil suit and attack the Bulletin. (And to kill Jasper Evans, who was about to give an incriminating statement against Fisk.) While Felix is obviously responsible for a lot of shady stuff on Fisk's behalf, this is a majorly deadly move.

Daredevil Season 3 is at least partially based on the Born Again arc from the comics. In Born Again, Fisk hires a lunatic to wear the Daredevil suit and go after Karen. This "lunatic" in the comics isn't Bullseye. But similar to the Netflix series, Felix Manning is the person who orders Melvin Potter to make the duplicate suit for the impersonator. In Season 3, Melvin has a sad fate. He makes the suit for Bullseye to keep his parole officer/girlfriend Betsy safe from Kingpin, but he gives himself up to the FBI to protect Daredevil in a shootout in "Aftermath."

As for Felix, he's fine in Daredevil — for now. But in the comics, the very same lunatic that he gets the Daredevil suit for ends up killing him. Since the lunatic doesn't work out, Kingpin then needs to hire another assassin to impersonate Daredevil. Fisk enlists Nuke for the task, but don't expect him to pop up in Daredevil since Nuke's real identity is Will Simpson, who was featured in Jessica Jones. Plus, Bullseye has this whole impersonating Daredevil thing on lockdown.

Felix's role in Daredevil Season 3 is far more significant than in the comics since he appears to be one of Fisk's most trusted advisors. After Ray begins to suspect Dex (thanks to Matt, of course), Felix delivers Dex to Fisk at the secret entrance to his hotel room. So he continues to facilitate the unraveling of FBI Agent Fisk into Bullseye.

Karen knows that Felix is working for Fisk, but Karen, Foggy, and Matt are focused on other issues currently. But perhaps, in order to bring down Kingpin, they'll be able to do so through Felix Manning.