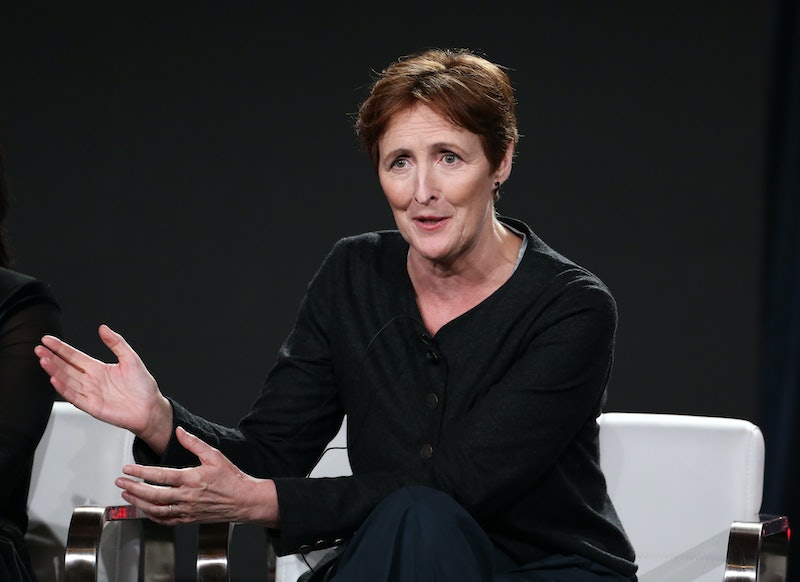 Actress Fiona Shaw is known for her work on TV shows such as Killing Eve and Mrs. Wilson, as well as, of course, her performance as Petunia Dursley in the Harry Potter film franchise. She is also currently starring in the second series of the BBC comedy-drama Fleabag, in which she plays the lead character's counsellor. But what else is there to know about the actress? Fans are interested to know: is Fiona Shaw married? And what is life like for the actress when she is off screen?

According to the Daily Mail, Shaw is married to Sri Lankan-born Dr Sonali Deraniyagala, a 54-year-old professor in economics at the School of Oriental and African Studies in London. Deraniyagala also works as a visiting professor at the School of International and Public Affairs in New York's Columbia University. Bustle has reached out to Shaw's reps for confirmation about the marriage, and I'll update you if any news becomes available.

In 2004, Professor Deraniyagala suffered unimaginable tragedy when her husband (economist Stephen Lissenburgh), her two young children, and her parents all died in Sri Lanka's Boxing Day tsunami. Deraniyagala documented her experiences with this devastating loss in her memoir Wave, which came out in 2013.

As the Mail reports, it is believed that, after reading Wave, Shaw was so deeply moved that she asked to be introduced to the author through mutual friends. Once they met, the two women hit it off straight away. Shaw lists Wave as one of her all-time favourite books.

The Mail also reports that Shaw made some very sweet remarks about married life, saying: "I married and that calms you down. I didn't really have a domestic life because I was always working. But I do have one now, which I love."

The couple have homes in the London borough of Islington and in Chelsea in New York City, according to the Mail. Shaw has travelled to Sri Lanka many times with Deraniyagala, visiting the professor's relatives in Colombo. The two have also made appearances together at Sri Lanka's Galle Literary Festival, which draws in leading writers and actors from across the globe every year.

As previously mentioned, Shaw stars as the counsellor in the second series of BBC Three's Fleabag. Other cast members of in series two include Phoebe Waller-Bridge as the lead character, Sherlock star Andrew Scott as a priest, Vanity Fair's Sian Clifford as the lead's sister Claire, Stranger Things actor Brett Gelman as Martin, and the Academy Award-winning Olivia Colman stars as the lead's godmother.

The first season of Fleabag centred around a young woman living in London, who, after the tragic death of her best friend, was attempting to get her life back on track. Speaking to Dazed, Fleabag producer Lydia Hampson discussed what viewers can expect from series two. She said: "We can’t go back to pretending she’s fine again. Whatever our story is, we're going to start a year on from where we left off." The second series of Fleabag airs on Mondays at 10.35 p.m. on BBC Three.