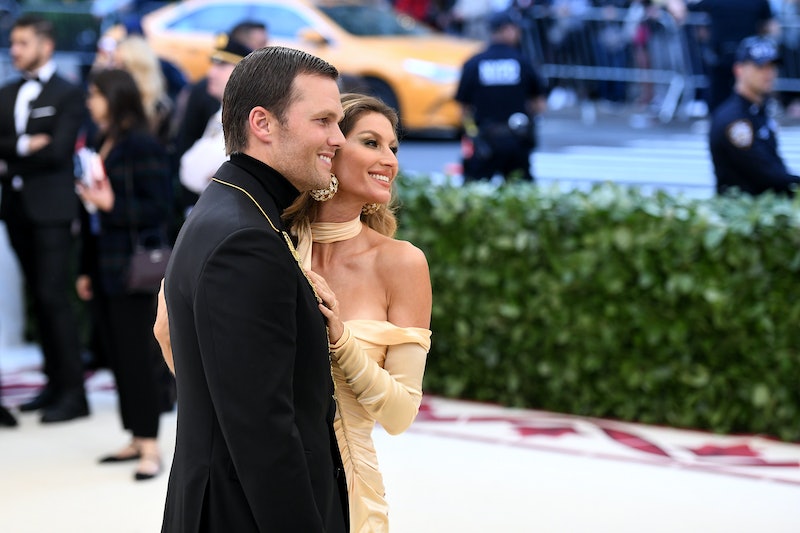 Being one half of a power couple means showing up for your partner's big moves, which is why you can always expect to see Gisele Bündchen on the sidelines when her husband, Tom Brady, and the rest of the New England Patriots take the field for a championship game. Although some fans were struggling to spot her at first, fans can rest assured that Gisele Bündchen is at the 2019 Super Bowl. Seriously, she hasn't missed one yet, so it was pretty much a given that she and their kids would be in Atlanta, Georgia, on Sunday evening.

While you might not be able to spot her during the CBS broadcast (darn sports news producers focusing on the game and all...), Bündchen typically ends up posting pics of the game from her spot in the stadium — usually a fancy box where the couples' kids can be spotted lounging, eating snacks, and cheering on their dad. This year was no different. The supermodel started early, posting a picture of her and husband on the field Saturday afternoon with the caption, "I got your back!" Then, early on Sunday morning, she shared a shot of 6-year-old Vivian wearing one of her dad's jerseys on the same field with the caption, "Let’s go papai!!! Let’s go pats!!!" As of Sunday evening, there weren't any pictures of 9-year-old Benjamin or Brady's eldest son, 11-year-old John, from his previous relationship with Bridget Moynahan, in the Atlanta stadium, though of course it's possible they're all there, too.

The family takes football very seriously, as you can imagine. Last year, Bündchen told USA Today that her kids were visibly upset after the Patriots lost to the Philadelphia Eagles. The model said that she told her daughter, "They haven’t won in a million years. The Eagles won the Super Bowl. Just this time. Daddy won five times. They never won before." She added, "Their whole life, they never won a Super Bowl. You have to let someone else win sometimes. Sometimes you have to let other people win. We have to share. Sharing is caring."

Now, it might be a little much to say that the Patriots let the Eagles win in 2018, but it goes to show how seriously the kids and Bündchen take the game. The day after, the family was still processing the loss, and the model posted a picture of Brady with her and the kids, with the caption:

Congratulations Eagles for winning the Super bowl, what a game that was! Congratulations Patriots for giving your best and to my love, we are incredibly proud of you because we are able to see ever [sic] day all the commitment, sacrifice and hard work that you have devoted to become the best in what you do. We love you!

No one likes to lose, and the Patriots don't really do it all that often. Last year, Brady told HuffPost that "no one's going to feel sorry" for this team for losing, given their record. The Los Angeles Rams are going into the game as underdogs, too, much like the Eagles did last year. And it was almost two decades ago that the Rams and Patriots first played each other for the championship, and the New Englanders won their first-ever Super Bowl title thanks to Brady. So there's a lot of history being rehashed on that field this weekend.

For Vivian's sake, let's hope the Pats don't "let" the Rams win this year, too, just to make things even. But either way, expect lots of football-themed Instagram posts and words of wisdom about winning and losing from Bündchen throughout the big game and into next week. It's tradition after all.