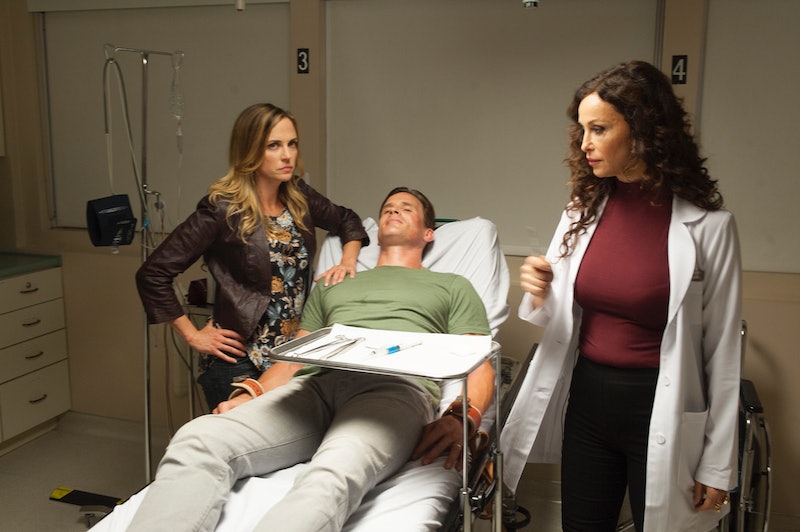 Lifetime movies are generally divided into two groups: Those based on an eccentric news story or the life of a celebrity, and original, horror-tinged dramas about middle aged women or their teenage daughters dealing with some version of the "blank from hell," be it guidance counselor, neighbor, or podiatrist. So, is latest Lifetime original Give Me My Baby based on a true story? Turns out, the film, about a couple whose fertility doctor has nefarious motivations to steal their still-unborn child, is in the latter category.

Thankfully, there haven't been any recent stories about baby-thieving fertility experts, nor any couples who had to resort to violence in order to ensure the safety of their IVF treatments. Here and there you can find news stories of strange happenings in fertility, like a fertility expert who claims to have created a child with three biological parents, according to NPR. But this Lifetime movie seems to be borrowing much more heavily from the typical thriller. Actually, it's part of an overall wave of child and baby-themed Lifetime original movies right now. Seriously, someone at Lifetime must be really stressed out about the prospect of having kids, because lately, being a mom, getting pregnant, or even having a female reproductive system at all is enough to kick off a two-hour psychologically tense adventure. Here are a few others that make reproduction seem terrifying.

A teenager running away from a troubled past winds up getting pregnant by her much, much older boyfriend. Surprisingly, the least dangerous part of the situation is the older man's wife — who's actually pretty amenable about the situation.

In this surrogacy story, a couple thinks they've found a normal young student to help them have a child. But like all women who want a closer relationship with a man in movies like these, she's willing to murder to keep the husband and baby all to herself.

In this version, a woman thinks she's in the clear because she's carrying a baby for her sister — how could that possibly go wrong? Well, first of all, of course it can, and second of all, by both sisters having secret pasts.

Manage to get through pregnancy without any casualties? Well, then, now it's time to worry about who's taking care of the child while you're at work, because according to this movie, she's probably trying to undermine your motherhood.

Even in Lifetime's prestigious awards bait, there's still horror to be found in parenthood — this time, in family court, where Viola Davis and Hayden Panettiere face off to determine whether or not a single mother can regain custody of her children. A more realistic horror, but a horror nonetheless.

And this short-lived Lifetime series from 2014 was set in a future plagued by limited fertility, where being a parent has been limited to only a select few lottery winners. So, as you can see, parenthood — and, more specifically, pregnancy and motherhood — is no easy thing on Lifetime.