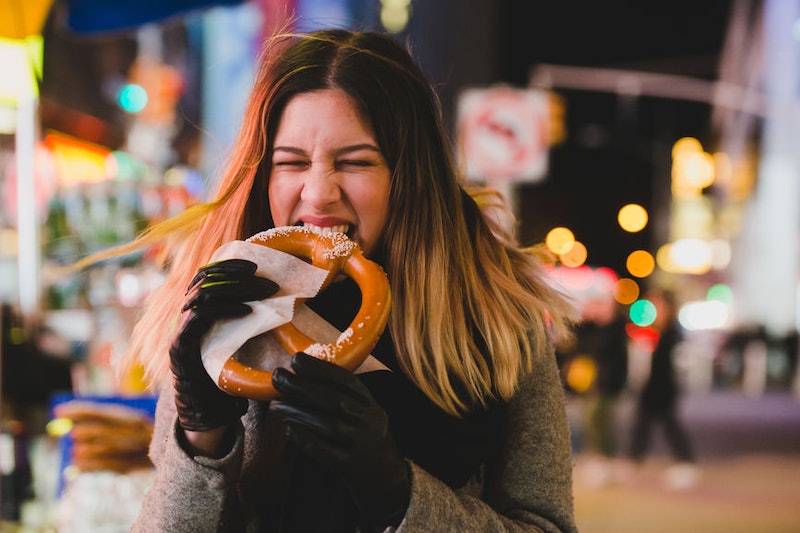 To all of the people who denied that hangriness was a real thing, I only have one word to say: ha. So is hangry a medical condition? Well yes, according to scientists. It's so real, in fact, that they believe this supposedly "fake" emotion could have links to mental health issues.

Researchers at the University of Guelph in Canada recently published the results of a study looking at the effects of hunger on mood. The team — who have been studying various factors associated with depression — used rats to test the theory that hunger-related anger is due to a condition called hypoglycaemia. In plain English, that means low glucose levels.

In order to study this hypothesis, scientists had to induce the condition in the animals. They did this by injecting a glucose metabolism blocker which resulted in the onset of hypoglycaemia. The rats were then placed inside a chamber. On a different occasion, the same rats were injected with water and put in a different chamber.

The rats were then given the choice of which chamber to enter. The results, published in the journal Psychopharmacology, showed that the rodents avoided the chamber where they had experienced hypoglycaemia. Blood levels were also tested and found to contain more corticosterone after hypoglycaemia. This is a sign of stress in the body.

"This type of avoidance behaviour is an expression of stress and anxiety," Professor Francesco Leri said in a statement. "The animals are avoiding that chamber because they had a stressful experience there. They don't want to experience it again." He added: "I was skeptical when people would tell me that they get grouchy if they don't eat — but now I believe it."

These results not only appear to prove the concept of being hangry but also have a much bigger implication when it comes to conditions like depression. Experiencing hypoglycaemia once may only trigger temporary hangriness but researchers believe an ongoing poor diet could lead to constant negative feelings.

"Poor mood and poor eating can become a vicious cycle in that if a person isn't eating properly, they experience a drop in mood, and this drop in mood can make them not want to eat," commented the study's leader Thomas Horman. "If someone is constantly missing meals and constantly experiencing this stressor, the response could affect their emotional state on a more constant level."

Obviously, a hunch is just a hunch unless it can be scientifically proven. So the team decided to treat the rats' bad mood with an antidepressant. When the rats were administered bupropion, the stress response they had been exhibiting disappeared almost entirely.

"That told us we were dealing with central mechanisms beyond glucose being available to muscles," Leri added to the Daily Mail. "So it crosses nutrition with mental health [and shows] nutrition can play a role in behaviour and mood."

We may all laugh at being hangry every once in a while but it's scary to think that regularly missing meals could contribute to an ongoing bad mood. Perhaps it really was a good decision for the word "hangry" to be officially added to the dictionary.