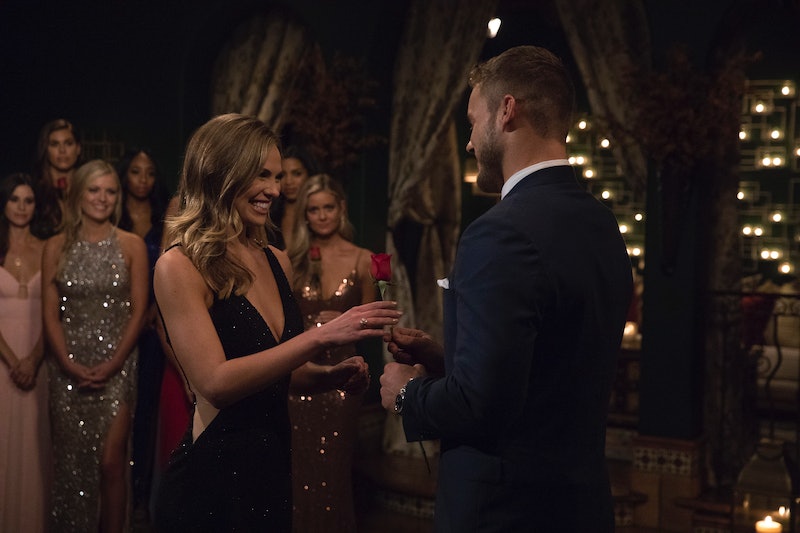 Hannah B. has been one of the more polarizing, and perhaps misunderstood, contestants this season on The Bachelor. She's a little awkward, has been involved in a little drama, and doesn't always seem like she knows what she's doing. Still, she's far from the villain of the season, and it's clear that Colton has kept her around this long for a reason. Even though we can't know for sure what happens at the end of the road, we can still definitely wonder if Hannah B. is single after The Bachelor.

Hannah's Instagram feed is totally devoid of any man who isn't Colton, as you might expect. These girls are pros at avoiding any kind of spoilers, so all the contestants' social media is pretty scrubbed of anything that could give viewers hints at upcoming plot twists. That doesn't mean there's no romance afoot, though — Hannah has posted quite a few Valentine's Day themed photos. In them, she's seen frolicking through a supermarket's wine aisle, giant teddy bear and bouquet of roses in hand.

What does this mean? Why does Hannah need so much wine on Valentine's Day? Is she sad because she's single? But then where did she get the gifts?

Of course, it's just a fun photo shoot, and probably shouldn't be read as an omen of some kind. But hey, I reserve my right to speculate with what little clues I am given.

Other than that, Hannah's mostly shared photos of herself alone, or with Colton, or with the other girls in the house. She seems to have made tons of friends, even apparently nicknaming herself, Heather, Hannah G. and Demi "TripleHD." She's also posted cute videos of herself and Demi taking part in inside jokes, and shared videos that hilariously poke fun at some of her more memorable lines and moments thus far. Hannah seems to be super good-natured when it comes to her experience with the show, which is always nice to see.

Back home, Hannah's shown fans pieces of her everyday life, and though there isn't a romantic interest to be seen, things still seem like they're going well for her. She's got her very cute dog named Roscoe, a family that got together for the holidays, and a friend's adorable baby to snuggle.

Hannah will probably find the love she's looking for sometime soon, even if it isn't necessarily with Colton in the way she clearly hopes. She seems like a sweet girl, even if she's come across less than great at times. Her drama with Caelynn took up way too much time earlier this season, but they've since squashed the conflict in favor of keeping the peace. And her one-on-one with Colton was awkward enough to make anyone squirm, but she's continuously avoided elimination since there, signaling that he's still interested in getting to know her better.

Hannah is basically the little engine that could of this season of The Bachelor, and while doubt still remains surrounding if she's single after filming is said and done, viewers can continue to enjoy her antics until answers are revealed.