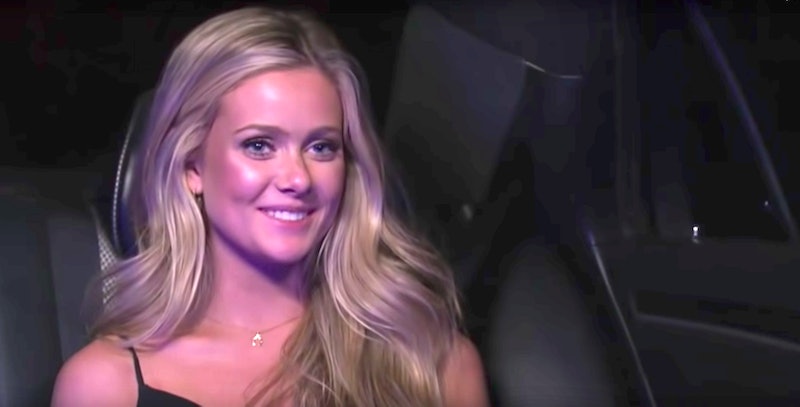 If the show's history is any indication of its future, the recipient of The Bachelor's first impression rose will typically find a spot in his heart — and potentially win him over for good. This season, Hannah G. received the first rose from Colton, and now, she's part of the final three. Many people thought she was guaranteed the final rose, up until the two-part fantasy suite episode aired. That's when everything changed. And now, there's a good possibility that Hannah G. is single after The Bachelor.

If you haven't heard (Are you living under a rock?), Colton finally jumped the fence — one that only an ex-football player could clear without assistance. The moment fans have watched in trailers all season long finally surfaced because of Colton's painfully strong love for not Hannah G., but Cassie.

Fans knew Cassie would be a frontrunner from the beginning, too. How could they forget their private island — err — sandbar make out sesh? But Hannah G. had plenty of those too, only they were spent in mud baths and wrapped in seaweed leaves. Not to mention, rolling around on a bed of dozens of pillows.

So it came as kind of a surprise when Colton fully confessed his exclusive love for Cassie during what was supposed to be their romantic and sexy fantasy suite date. But, things took a turn when Cassie got cold feet. She told him she didn't feel ready to commit to an engagement, and because of that, she had to leave.

The unexpected drama between Cassie and Colton left Hannah G. hanging. She was planning on a magical night spent with Colton, and instead, found him crying over another girl. Some are wondering if Hannah G. will still get her date during the season finale — but at this point, is it even worth it? Colton called Cassie "the one," and said he would "never stop fighting" for her. Doesn't that, by default, make Hannah G. single? That may seem to be the case, but until the rest of the season airs, the answer's not so black and white.

On the morning of March 11, the air date of part one of the finale, The Bachelor's official Twitter page tweeted a sneak peek video with the caption, "We promise we didn't forget about Hannah G." In it, she says, "I'm putting it all out there. So I'm like... I love you." Hopefully, she doesn't put it out there only to get her heart broken in return. But right now, the odds aren't really in her favor.

However, Colton shared on his Twitter that fans are in for even more surprises, so at this point, anything could happen. "If you thought last week was intense just wait until this Monday & Tuesday," he wrote. "The end is near." It's certain that the fantasy suite episode was not easy for Hannah G. to watch. "well since we’re on the topic of fences," she wrote on Instagram. "I’d jump a fence to not watch that episode again."

She sealed the note with a broken heart emoji. It's no wonder she hasn't shared much of her Bachelor journey with Colton on her page — a broken heart is often the result of a really bad breakup, and no one deserves to experience the same one twice. Hopefully, Hannah G. doesn't have to.