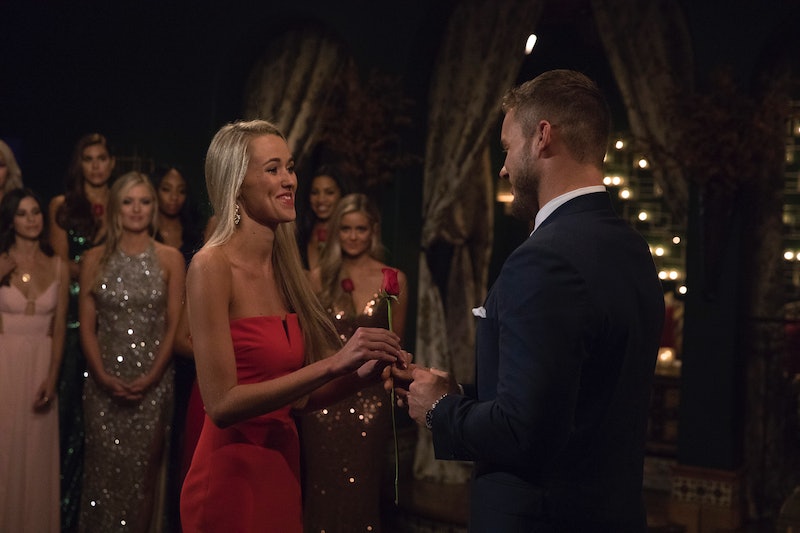 Colton and Heather have one big thing in common on this season of The Bachelor: their storylines have been reduced to the fact that they've both been saving themselves for the right person. There's been as much made of Colton's virginity as there has that, up until their one-on-one date, Heather had never kissed anyone. But obviously, neither of them are defined by how far they have or haven't gone, and as the season's pressed on, we've come to know Heather as quite the catch. She's sweet, bubbly, and kind.... all of which leads to a few inevitable questions: is Heather single after The Bachelor? Does she wind up with Colton? Has she found love with someone else entirely?

According to her Instagram page, where she's posted many pictures of her family, Heather has been pretty busy following her time on The Bachelor. One thing missing from her feed, however, are any clues about her relationship status. The reason for this is simple: her episodes of The Bachelor are still airing, meaning any indication that she's dating someone that isn't Colton would kind of spoil the season, and a hint that she is dating Colton would definitely ruin the season.

That being said, she has been spending time with a special someone. In early February, Heather shared an Instagram post about a "truly magical" evening she had with a young man named James at Tim Tebow’s Night to Shine, an annual prom-style event for people with special needs. It wasn't a romantic occasion, but it shows that Heather is having pleasant experiences without the aide of The Bachelor's travel budget or the need for a boyfriend on her arm. "I am so grateful to see the work this organization is doing by putting on a prom night to celebrate people with special needs," she captioned a series of photos. "James absolutely stole my heart."

However things pans out on The Bachelor, we probably won't know what Heather's current love life is like until after she's left the show — with or without Colton. In the meantime, she's had a great sense of humor about airing out her personal details on national TV. "Tune in to ABC January 7th to watch me voluntarily embarrass myself on national television," she captioned her cast photo on Instagram ahead of the season premiere.

But it hasn't been all laughs. "I was really nervous before last night’s episode aired because I knew my position and my stand on relationships and intimacy is not the norm. I know I am not alone in feeling insecure at times because my experience is not that of my peers," she wrote in another post. "That being said I am proud of where I am and my decisions I have made to follow my heart and stay true to myself ... I am so happy if my story can help anyone feel less alone and normal about taking YOUR time with relationships!

The Bachelor may be giving her a one-note storyline, but fans are seeing plenty of her personality off-screen, and it's one we'll hopefully get to see more of, whether on Bachelor In Paradise, The Bachelorette, or during the lengthy press junket she'll have to do if she ends up with Colton.