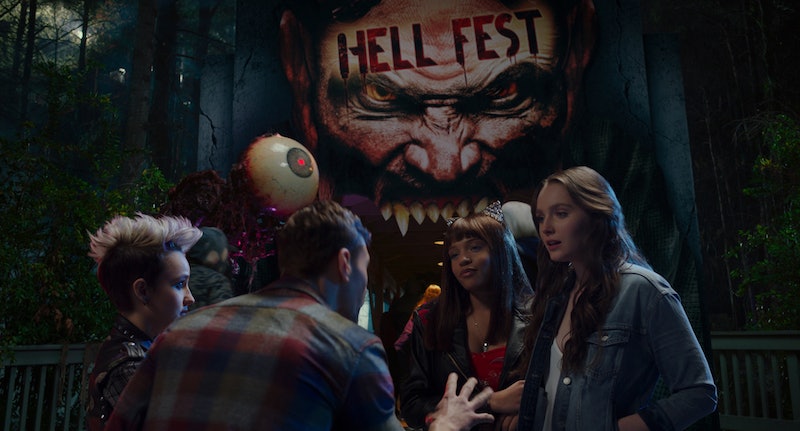 The moment the first leaf falls from its tree, autumn is on and popping. That means cider, hayrides, sweaters galore, and of course...the ramp-up to Halloween. Preceding the spookiest time of year are hundreds of carnivals, fairs and festivals, some celebrating the harvest, others harvesting screams from happily paying customers. A movie celebrating mazes of the menacing sort, Hell Fest, is coming out just in time for the high haunted holiday, but is Hell Fest a real Halloween carnival or just an amalgam of beloved monster mazes?

The new film (out Sept. 28) follows three friends who've grown apart after heading off to college. Back in town for the season, they hope to rebuild their bond by heading to Hell Fest, an over-the-top Grand Guignol playground of horror mazes, rides, and costumed actors whose sole job is to scare the living daylights out of visitors. Bringing along their significant others, the six head in for a night of supervised scares, but amid the fake blood is one very real killer.

The title park is fake, but likely inspired by one of the movie's real-life partners, Six Flags' annual Fright Fest, where the entire theme park undergoes a ghoulish transformation According to its website, "Fright Fest offers a wide variety of places to get your scare on including several haunted houses and scare zones located throughout the park...The ghouls are set free for their daily hunting rituals. BEWARE! There is no place to hide!" Universal Studios has a similar setup with its Halloween Horror Nights, adding multiple themed haunted houses throughout that visitors can wander through and face their fears, with interactive elements sprinkled in to add an extra layer to the scare.

Hell Fest director Gregory Plotkin explained to Flickering Myth that "it's very cathartic to experience those fears in a safe environment...and that's what we tried to play up on with the film — what if it's not a safe environment?" Unlike most real-life scare parks, which set up in a preexisting location, the movie's Hell Fest is a roaming terror, setting up in a different spot every year with hell-bent horror buffs following it around the country. A few fright fests, like The Great Horror Campout, set up tent in a temporary location and offer a full night of on-location apprehension. Their site specifies "Regardless of how high the camper chooses to turn up the volume on their experience, all content is strictly for entertainment purposes and at no time will campers ever be in real danger." And that's the key to Hell Fest's dread...what if you were?

Unbeknownst to the girlfriends hoping to bond over some shared screams, one visitor has truly murderous intents — but who would suspect actual bodies when you're primed that it's all an act? There've been numerous instances of real corpses turning up in haunted tableaus, undetected for weeks by visitors and neighbors who thought they were just decor. One of the longest-undetected is Elmer McCurdy, whose body ended up dangling from a noose in a California spook-house. So it's not entirely impossible to come across some real scares amid fake monsters. For the friends in Hell Fest however, their threatening theme park is just another lingering fear to add to the long list exploited by real-life parks.

More like this
These 25 International Horror Movies On Netflix Prove Fear Is A Universal Language
By Bustle Editors
Paul Mescal, Man Of Mystery
By Samantha Leach and Heather Hazzan
12 ’90s Movie References You Missed In 'Do Revenge'
By Radhika Menon
What’s New On Netflix: Ana De Armas’ 'Blonde' & A Nick Kroll Special
By Arya Roshanian
Get Even More From Bustle — Sign Up For The Newsletter