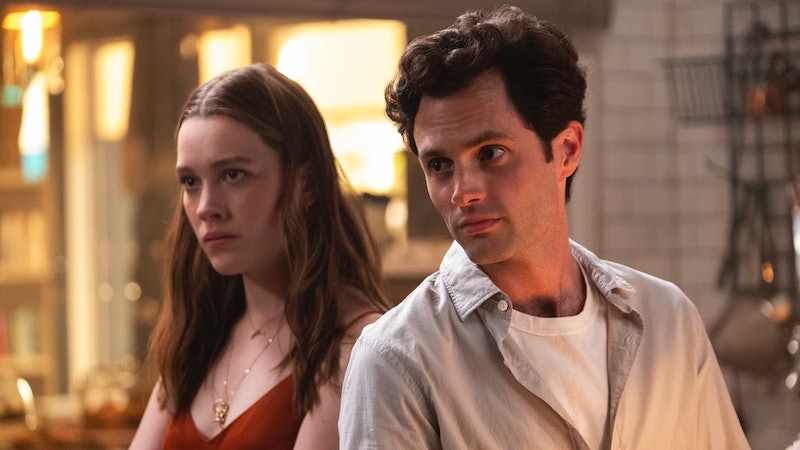 Spoilers ahead for YOU Season 2. YOU Season 2 is set in Los Angeles and as much as it is still a story about an obsessive stalker and murderer, it's also a reflection on what makes the City of Angels so great. And what makes it the most eye-roll worthy. Among the many jabs the series takes at the city, the character of Henderson in YOU Season 2, played by Chris D'Elia sums up everything Joe hates about his new hideout.

Based on Caroline Kepnes’ novel of the same name, YOU's second season will be loosely based on Kepnes’ sequel Hidden Bodies. Joe (Penn Badgley) moves to Los Angeles and meets a new woman, Love (Victoria Pedretti), and enters into a social circle (sort of) that includes a famous comedian, a hypebeast sort of bro who always wears designers hoodies, sunglasses inside, and fancy sneakers. When Kepnes shared the news on Twitter, she revealed that D’Elia is exactly how she pictured Henderson when she wrote Hidden Bodies.

Hopefully the comic and actor, whose credits include NBC’s Whitney and Undateable, doesn't take offense to that characterization. His stand-up TV specials include Netflix’s Incorrigible and Man on Fire, as well as Comedy Central’s White Male. Black Comic.

Shortly after his casting announcement, D’Elia took to Instagram to confirm the news and reveal he’s a huge fan of the Netflix thriller. “We are thankful today!,” he wrote alongside a screenshot of Deadline’s report. “I’m excited to get to work on one of my favorite shows @younetflix! Catch up on the first season on @netflix so you’re ready for season 2!” The comedian has since shared various previews of his character on social media in the lead up to Season 2.

In the first season of YOU, viewers were introduced to bookstore manager Joe as he obsessively stalked an aspiring female writer named Beck (Elizabeth Lail). Season 1 concluded with a finale filled with twists and deaths, such as the return of Joe’s first victim and ex-girlfriend Candace. With Season 2, the sociopathic Joe heads to Los Angeles for a new start, where he meets an aspiring chef named Love and falls back into some old habits. In the eery trailer, Candace confronts her ex about his return to his murderous ways and asks, “You did it again, didn’t you?”

He most certainly has and Henderson actually plays a huge role in Joe's LA journey. Henderson, or Hendy, takes a liking to Joe's young neighbor, Ellie (Jenna Ortega). Despite being a stalker and a murderer, Joe somehow cannot abide the fact that the young girl looks up to Henderson as a mentor. His sense of morality is shaken when he realized that Henderson might be planning on taking advantage of her, given that he has drugged and sexually assaulted other women in his Hollywood circle.

YOU Season 2 is a windy, action packed ride. And Chris D'Elia as Henderson really rounds out the themes of the season. Even if he might not be able to escape Joe.

More like this
The 'Kenan & Kel' Reunion On 'SNL' Took A Dramatic Turn, Thanks To Keke Palmer
By Brad Witter
Keke Palmer Just Announced She's "Going To Be A Mom" On 'SNL'
By Brad Witter
You’ll Most Definitely Recognise Kyle Pryor’s Soap Star Girlfriend
By Sophie McEvoy
Another 'Sex Education' Star Has Joined The 'Doctor Who' Franchise
By Darshita Goyal
Get Even More From Bustle — Sign Up For The Newsletter