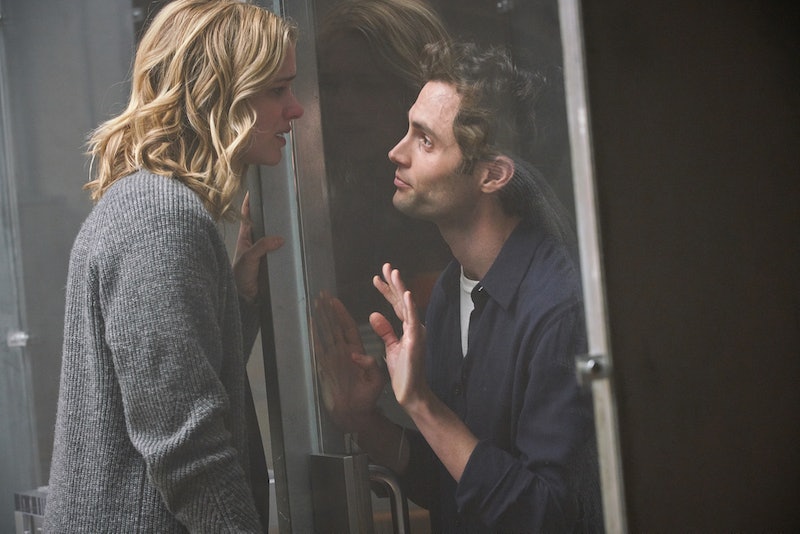 Spoilers ahead for the Season 1 finale of YOU. Strap yourselves in, You fans, because the Season 1 finale was one hell of a bumpy ride. Even if you’ve read Caroline Kepnes’ original source material, you were probably watching the Season 1 finale of You with your fingers covering your eyes. (Or was that just me?) Penn Badgley plays such a perfect psychopath, don’t you think? In the end, Joe ends up without his love —because he murders her. Yep, Beck is dearly departed because she didn’t understand that you can never trust a horror movie. If you're assailant falls down, you have to check and make sure he's really dead, right? Those guys always pop up. (More on that later).

The end of Season 1 sets up You perfectly for a Season 2, which, according to Deadline, was renewed even before the premiere of YOU debuted on Lifetime. Don’t worry, fans who like to read the book, first. This isn’t a Big Little Lies situation. Kepnes’ second book is called Hidden Bodies, which sounds so far like Joe Goldberg’s autobiography. Season 2, according to Entertainment Weekly, will take place in Hollywood. Joe is going to California into “even riskier, bolder territory” where he’ll face “the darkest parts of his past as he tries to make a future for himself and the woman he loves.”

The Season 1 finale was set up perfectly for that plotline to unfold, although it might have some fans scratching their head. Joe is a stalker and not just a murderer — at this point, he's a serial killer, avenging all of the women (and men) who remind him of his triggered past. It's unsettling that we're being forced to watch this all from his perspective and be asked to sympathize with him.

Here are all the twistiest, creepiest moments from the You Season 1 finale that prove what a dirt bag Joe really is.

Beck Has An Epiphany

I don’t know about the rest of the viewers at home, but I’ve been screaming at the TV for ten episodes trying to get Beck to see what a creep Joe is. No, she thinks he’s sweet or something, probably because she doesn’t know he kills her friends and hacks her phone. Eventually, while she’s locked in a literal cage, she finally realizes Joe and all the other men she’s ever come into contact with in her life suck, and she writes her most important piece of work ever on Joe’s antique typewriter. She types in part to convince him that she understands why he did everything he does, but it's also a way for her to reflect on all of the toxic men in her life. Apparently, all you need to finish your MFA in Creative Writing is to be kidnapped. Later, the manuscript is published posthumously when Joe slips it in the mail to her friend Annika and it becomes a bestseller.

Paco isn’t in Kepnes’ novel and he was definitely added as a foil to make Joe look somewhat sympathetic. Mooney, the old bookshop owner, told Joe when he was just as a kid that some people deserve to die (he could have benefited from therapy). Joe, in turn, tells Paco the very same thing after the kid witnesses Joe killing his abusive next door neighbor.

Ron’s death isn’t a sad one, but it’s terrifying to think that Joe teaches Paco that murder can be done a moral sliding scale, much like Dexter. And that he didn't teach the kid to report abusive people to the police. Also, little 12-year-old Paco is so scared about getting Joe in trouble that he ends up not helping Beck escape from the bookstore when he has the chance.

Beck Almost Gets Away (Sigh)

Beck does that whole “I’m going to make my kidnapper believe I love him” thing after she writes her book and lures him inside the cage. Then, she stabs Joe with typewriter keys and locks him inside the glass cell. But the door to the top of the stairs is locked, giving him time to escape. Beck hits joe in the head with a mallet, but she doesn’t hit him hard enough, because at the last second, Joe grabs her. Luckily, viewers are spared the gory details.

Before Joe killed Beck, Beck came up with a brilliant plan to persuade Joe to let her ago so they could be free and together again — frame Nicky, Beck’s therapist, for the murders of Peach and Benji. It works, because she and Nicky (Stamos) were actually sleeping together and her friends were aware of it. The story is almost too perfect. Except for the fact that an innocent man goes to jail for murder instead of just being ruined for abusing his power and sleeping with a vulnerable, younger client.

Someone Is On Joe’s Tail

Peach was rich because her family was somehow related to J.D. Salinger, the famous author, and her family used their connections to hire a private investigator to look into their death. They just don't think she was the type to have committed suicide (although she did pretend to do just that on more than one occasion). The investigator doesn't seem to believe any of of Joe's explanations and is even seen in one of the final scenes reading Beck's book, shaking his head in disbelief. It's only a matter of time until that jar of urine Joe left at Peach's house ends up on his radar and he heads west to follow Joe in Season 2. Right?

In the book, it's very clear that Joe kills Candace, but it looks like the series is bringing her back. At the very last second, she walks into the bookstore and tells him that they have to talk. The look on Joe's face is a clear sign that he thought he had killed her or ran her off for good.

RIP to Peach, Beck, Benji, and Ron, but don’t worry — it won’t be easy to Joe to hide for much longer. Joe obviously has some people he's going to have to answer to come Season 2.

More like this
Does 'Locke & Key’s Ending Mean There Could Be A Season 4?
By Sophia Moore
'The Sandman’s Ending Is A Departure From Neil Gaiman’s Comic Book Series
By Kadin Burnett
'Yellowjackets' Just Announced Who’s Playing Adult Van & It’s Perfect
By Gretchen Smail
'The Capture' Is Finally Back – & S2 Looks Tense AF
By Sophie McEvoy and El Hunt
Get Even More From Bustle — Sign Up For The Newsletter