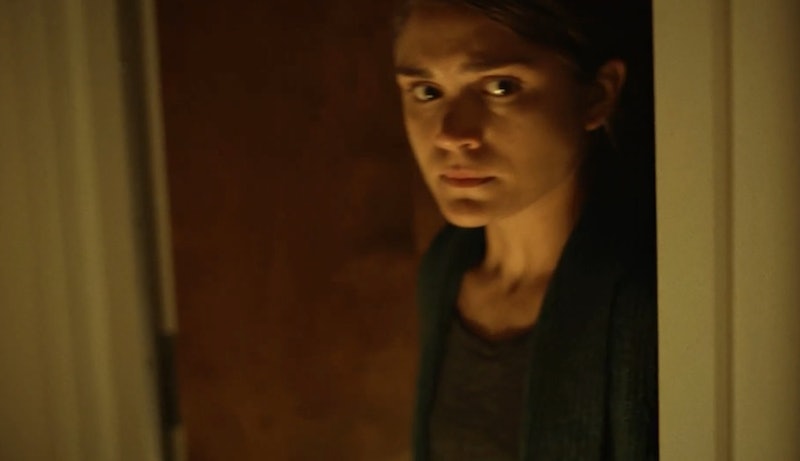 When it comes to retelling melodramatic tales, no one can spin (and respin) a yarn quite like Lifetime. In their latest made-for-TV movie, Her Worst Nightmare, which premieres on Sunday, Aug. 26 at 8 p.m. E.T., teenager Dakota has been kidnapped and trapped in a dank basement, abused by her evil captor. The movie picks up a year after her rescue, but signs from her traumatic past soon start to haunt her again. It's hardly the first time Lifetime has elaborated on a kidnapping plot, but is Her Worst Nightmare based on a true story?

Thankfully, it looks like this particular story is all fiction. Lifetime tends to be pretty open about when they base their tales on real life, such as in the case of the The Girl in the Bunker, based on the true story of the actual kidnapping of Elizabeth Shoaf in 2006, which premiered earlier this year on the network. Since the network hasn't said anything to indicate that the characters or events in Her Worst Nightmare are based on reality, you can feel pretty sure it's pure fantasy.

Unlike The Girl in the Bunker, Her Worst Nightmare deals more with the fictionalized aftermath of one girl's kidnapping, rather than her escape from initial capture. According to the official synopsis of the Lifetime website, main character Dakota (played by Claire Blackwelder) tries to take matters into her own hands this time when frightening reminders of her past start appearing again.

It's been a year since Dakota was rescued from a grim, terrifying basement, where she was kidnapped and abused by a monstrous man. Now she's trying to move on with her life and get away from her past by pursuing a degree in psychology. But the normal life she had starts to unravel when she realizes someone is stalking her with reminders of her haunting past. Dakota is convinced that her kidnapper is back again, but no one will believe her claim. Now, fearing for her life, yet determined to no longer be the victim, Dakota needs to uncover her tormentor and end this nightmare for good.

In the trailer, Dakota's psych professor lectures on how trauma can create hallucinations, essentially perfectly laying out the conflict for the whole movie. "Exposure to trauma can rewire the brain," he says, "causing it to wrongly perceive danger in every situation." Another (male) voice in the trailer wonders if Dakota is having "a psychotic break." As though the kidnapping story weren't enough, it looks like there's going to be a lot of layering of pseudo-psychology on top, for extra confusion and tension.

Sounds pretty thrilling, but, luckily, not all that believable.

If you're interested in a real life account of what happens to a kidnapping victim, then you should try I Am Elizabeth Smart instead. This one's also a Lifetime movie, but with a special caveat: Smart herself is the narrator, telling her own story on screen. It's still chilling, but it shows its central character in an empowered light, taking control of her own narrative after the unspeakable things that happened to her. Heck, it would even make for a good double feature, back to back with Her Worst Nightmare.