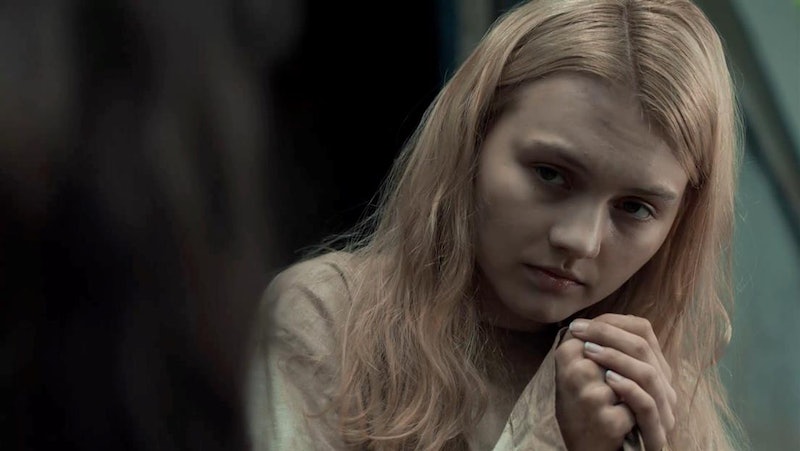 If you were around in the early 2000s, then you probably remember hearing about Elizabeth Smart. In June of 2002, the 14-year-old was abducted from her home in Salt Lake City, Utah by a man and was held captive for nine months before she was rescued by police. Her harrowing story made national headlines, and it's now become the subject of a new Lifetime movie: I Am Elizabeth Smart. But just how accurate is I Am Elizabeth Smart? Is the new movie a faithful retelling of Smart's actual kidnapping, or is it an over-dramatized piece of schlock entertainment?

Although Lifetime has a bit of a reputation for churning out melodramatic guilty pleasure movies — not that there's anything wrong with that — this new movie isn't one of them. I Am Elizabeth Smart is astoundingly accurate, often feeling more like a documentary filled with reenactment scenes than a dramatization. And there's a good reason as to why that is. Smart herself tells the story, acting as the film's on-screen narrator and making sure that everything that's shown is what actually happened to her. She also serves as a producer on the film, furthering her involvement with the production and ensuring its accuracy.

The movie is meant to coincide with the 15th anniversary of Smart's kidnapping, and it marks the first time the kidnapping victim has told her full story on screen. There have been previous attempts at telling the tale before, most notably in the 2003 television film The Elizabeth Smart Story, but none have had the level of involvement from Smart that I Am Elizabeth Smart does. "If you look at [The Elizabeth Smart Story], it really doesn’t portray what Elizabeth endured," executive producer Joseph Freed said during a TCA panel, according to Deadline's Amanda N'Duka. "It doesn’t even mention the word rape when that was a pivotal part of what Elizabeth overcame. Now we can tell the complete story and do it with Elizabeth herself."

In the film, which can be difficult to watch, Smart doesn't sugarcoat what happened to her. The movie shows her captor — Brian David Mitchell, portrayed by Skeet Ulrich — abduct her from her bedroom with a knife to her neck; her little sister sleeping by her side. It shows her being stripped by Mitchell's accomplice, Wanda Barzee (Deirdre Lovejoy), and forced to put on a ceremonial robe before being "wed" to Mitchell, who proceeds to rape her. It describes how Mitchell would continue to rape her every single day, often multiple times a day, for the entire nine months she was in captivity. It shows how she and Barzee were left in the desert without water for a week by Mitchell, and had their lives saved by a freak rain storm that Smart attributes to an act of God. All of these things really happened, and they're all accurately shown in the film.

Smart herself watched the finished product, and found it to be so accurate in its depictions of the horrible experiences she endured that it made her not want to ever watch it again. "I'm pretty proud of it and I've watched it ... but I never want to watch it again," Smart said during a TCA panel, according to E! News' Tierney Bricker. "It was so accurate. It was terrifying and so intense and part of me was like, 'I don't know if I want to feel all of these emotions again,' ... It did turn out to be what I wanted it to be. I am very proud of it."

Smart — who now works as an advocate for child safety and sexual abuse prevention — didn't make a film about her kidnapping as a piece of entertainment; nor did she do it because she's some sort of masochist. Her goal in telling her full, true story in I Am Elizabeth Smart is to offer hope to people who've been in similar situations. "Why did I tell you this story?" Smart asks at the end of the film. "The children like me, the others who have it worse, the ones who don't come home... I wanted to tell you, as someone who has been through Hell, that there still is hope. Find a miracle, hold onto it, and keep going. I'm not cracked. I'm not shattered. I am Elizabeth Smart."

I Am Elizabeth Smart can be a tough movie to watch, and it's made all the more difficult knowing that everything that happens on screen really happened to Smart. But the silver lining is that Smart's experience didn't break her, and now she's telling her story as a way to inspire and help others.

More like this
The 50 Most Powerful Characters In The Marvel Universe, Ranked
By Johnny Brayson and Nola Pfau
How To Stream 'Bros'
By Morgan Leigh Davies
13 Photos Of The 'Blonde' Cast Vs. Marilyn Monroe & Other IRL Counterparts
By Marina Watts
Gabby Petito’s Family Responded To The New Lifetime Movie About Her Final Days
By Grace Wehniainen
Get Even More From Bustle — Sign Up For The Newsletter