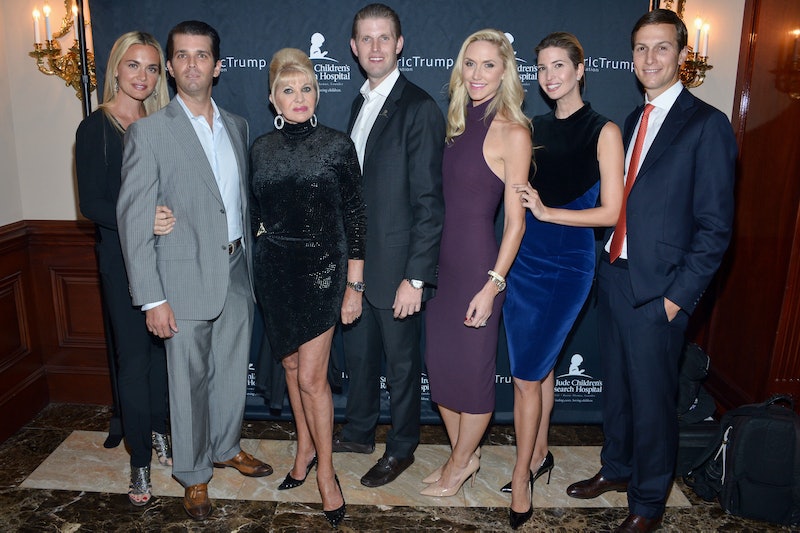 Trump's eldest daughter often receives a great deal of attention in the news media for her dual role as presidential advisor and first daughter. As a result, you may be wondering how the president's daughter gets along with other members of the Trump clan, including whether or not Ivanka Trump is friends with Lara and Vanessa, her sisters-in-law. If photographs of the sisters-in-law are any indication, it seems clear that the three Trump women enjoy spending time together.

Lara Trump is married to Eric Trump, Ivanka's brother. The couple have been married for over three years and have a child together. Vanessa Trump is married to Donald Trump Jr., the oldest of the Trump siblings, and shares five children with her husband. Vanessa filed for divorce from Donald Jr. on March 15, with the couple later releasing a joint statement announcing the end to their 12-year-marriage.

Trump family photographs on social media seem to reveal that Ivanka enjoys spending time with her sisters-in-law. For example, in June of last year, the first daughter attended Lara's baby shower in New York City. A photo shared on Lara's Instagram features Ivanka and Vanessa flanking Lara, posing for a photo with their hands placed on her belly.

Moreover, in August 2017, Ivanka shared a photograph on Twitter of herself, Lara, Vanessa, and her half-sister, Tiffany. In captioning the photo, she expressed fondness for her sister and sisters-in-law, saying "Love these ladies! Happy #NationalSistersDay!"

Lara has also shared photographs of the Trumps enjoying quality family time together. On March 16, she posted a photo of herself, her husband, and Ivanka and Jared on a ski trip, noting that it was a throwback to three years ago. She also posted another throwback photograph of the Trump family on Feb. 8, which featured Lara, Vanessa, Ivanka, and their husbands dining with Trump and Melania.

In addition to photographs revealing that the sisters-in-law spend quality time together, media interviews and social media posts also speak to their consistent support for each other. For example, in May 2017 Vanessa published a tweet congratulating Ivanka on the release of her book, Women Who Work. "Congratulations to my sister in law @IvankaTrump on her book launch Women Who Work!," she wrote. Lara shared similar congratulations on the same day, writing on Instagram "Very proud of my sister-in-law, @IvankaTrump, and the launch of her #WomenWhoWorkBook."

The sisters-in-law have also praised each other in various magazine interviews. Back in July 2016, Ivanka offered high words of praise for Vanessa in an interview with PEOPLE magazine, emphasizing how impressed she was with Vanessa's abilities as a mother: " My sister-in-law Vanessa is a machine."

She can take all of [my children] and not even notice. She has five children and she's Wonder Woman to me. ... She can be taking care of them all simultaneously, each pulling on her and have direct meaningful connections with each of them at one time. It's remarkable.

In an interview with HELLO! in March 2017, Ivanka's other sister-in-law, Lara, complimented the first daughter's style.

"I certainly try to look my best. I think our First Lady, Melania, and my sister-in-law Ivanka have impeccable style," said Lara. "I look to many different women for inspiration but try to make things my own. Each woman is unique and we look our best when we feel confident and comfortable in our own skin."

Moreover, Lara has also publicly defended Ivanka. During an interview with FOX Business in March 2018, Lara condemned NBC for asking Ivanka about the allegations of sexual misconduct against her father during an interview at the PyeongChang Olympics (Trump vehemently denies these allegations). In standing up for her sister- in-law, Lara said, "I give her a lot of credit for going on NBC actually, because they haven't been very kind to the president. ... I think this was incredibly inappropriate to ask Ivanka, and she handled it with such class and such grace."

Overall, it seems as though Ivanka, Vanessa, and Lara do indeed seem to enjoy spending time together — and that they take the time to support each other in their various professional and personal endeavors.