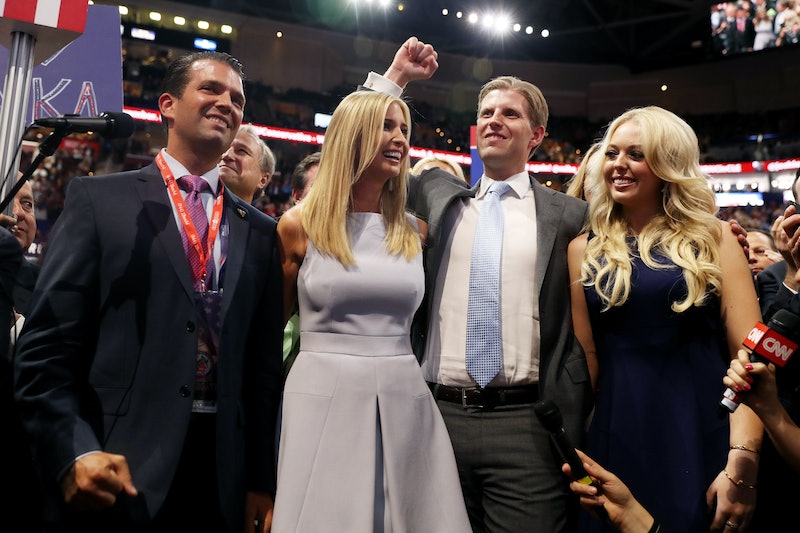 It looks like President Trump's upcoming state visit is going to be a family affair. As ABC News reported, the president and the first lady will be joined by Ivanka Trump and her siblings on their United Kingdom trip in June, where the family will get to meet Queen Elizabeth II. While the White House hasn't publicly confirmed the Trump family's attendance, ABC News indicated that sources familiar with the trip's itinerary said that all of Trump's adult children plan to travel across the pond for the occasion.

Ivanka, Eric, Donald Jr., and Tiffany Trump, along with Ivanka and Eric's spouses, will join Trump and the first lady for the visit, a White House official confirmed with Bustle. According to ABC News, Trump's children and their significant others will attend a dinner banquet hosted by the queen on June 3; they may also meet separately with Prince William and Kate Middleton, though the final itinerary for the trip is still being determined, per the outlet.

Trump will visit the United Kingdom from June 3 to 5 for an official state visit, the BBC noted. The outlet indicated that the trip will mark the second time that the president has met Queen Elizabeth II, as he first made her acquaintance during a working meeting in July 2018.

The BBC added that, in addition to attending the queen's dinner banquet, Donald and Melania Trump will attend a ceremony in Portsmouth in honor of the 75th anniversary of the D-Day landings — an operation that set the Allies on a path to victory against Nazi Germany during World War II. Moreover, the BBC noted that Trump will also meet with the UK's prime minister for official discussions during his time in the country.

Prime Minister Theresa May expressed that she hopes to work with Trump to discuss a variety of important issues, per the BBC. The outlet noted that May indicated that Trump's visit is an "opportunity to strengthen our already close relationship in areas such as trade, investment, security and defense, and to discuss how we can build on these ties in the years ahead."

However, as the Evening Standard described, because of the current situation in Parliament, it's unclear whether or not May will indeed be meeting with Trump during his visit. May is currently facing pressure to resign following the latest pushback over her most recent Brexit bill. That being said, Foreign Secretary Jeremy Hunt insisted to the BBC that May will meet with Trump when he arrives in June. "Theresa May will be prime minister to welcome him and rightly so," he told the outlet.

Overall, Trump's upcoming state visit to the United Kingdom seems to have a good deal of personal and professional significance. As the event draws nearer, many around the world will likely be watching to see how the representatives of both countries engage with each other — and how their respective families are incorporated into the visit.

This article was updated on May 23.