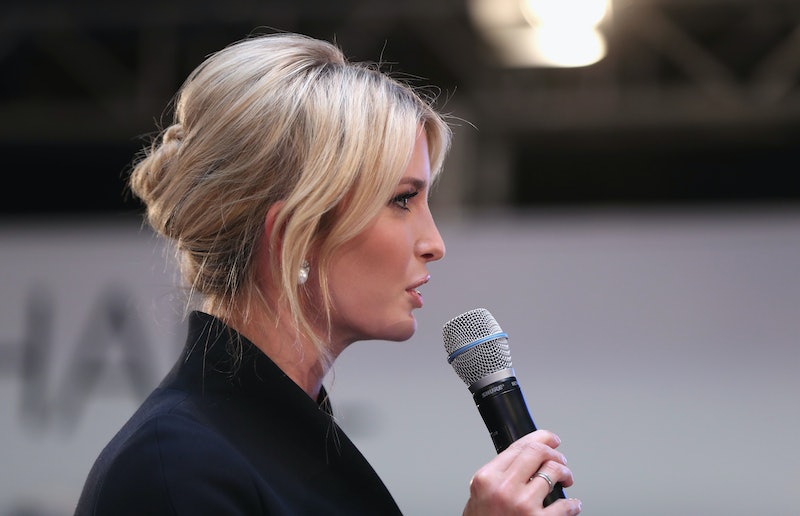 The president's eldest daughter has been around for many of his biggest moments. But it's unclear if Ivanka Trump is going to Vietnam for the second summit with North Korea leader Kim Jong Un. For reference, the first daughter didn't attend the first summit in Singapore.

The second summit between Trump and Kim will take place on Wednesday and Thursday in Hanoi, Vietnam, according to a tweet from the president. As a result of the first meeting, the two men signed an agreement that said they would "work toward complete denuclearization of the Korean Peninsula," but failed to produce an "explicit obligation" for North Korean disarmament to occur, according to ABC News.

In early January, Trump said the U.S.-North Korea relationship was progressing, according to USA Today. "With North Korea, we have a very good dialogue," Trump told reporters from the White House South Lawn. "I'm going to not go any further than that. I'm just going to say it's very special."

Even without presidential adviser Ivanka by his side, Trump has remained publicly pleased with this leg of his administration's foreign policy. At a press conference on Friday in the Oval Office with Chinese Vice Premier Liu He, Trump called the first summit successful. "The Singapore [summit] was a tremendous success. Only the fake news likes to portray it otherwise," Trump told reporters, according to a White House transcript.

Still, it seems like Trump has attempted to temper expectations of the summit on Twitter. "...Time will tell what will happen with North Korea, but at the end of the previous administration, relationship was horrendous and very bad things were about to happen. Now a whole different story," Trump tweeted on Jan. 30. "I look forward to seeing Kim Jong Un shortly. Progress being made-big difference!"

Despite her lack of presence in this one arena of her father's administration, Ivanka has still represented her father abroad solo. On Feb. 15, the first daughter attended the Munich Security Conference to encourage women's economic growth and entrepreneurship. The conference was also attended by German Chancellor Angela Merkel, a key U.S. ally.

It makes sense that Ivanka would be absent from the Vietnam summit as most of her work for the administration has focused on women and entrepreneurship in the last year. In January (during the government shutdown), reports surfaced of Ivanka's plans to develop a push by the White House for women's entrepreneurship and economic empowerment, according to USA Today. The initiative was formally announced in February.

The initiative will include representatives from international economic agencies like the International Monetary Fund as well as private companies like Bank of America, and American governmental bodies like the State Department and the National Security Council, according to The Associated Press.

"This new initiative will for the first time coordinate America's commitment to one of the most undervalued resources in the developing world – the talent, ambition and genius of women," Ivanka wrote in an op-ed announcing the initiative in the Wall Street Journal.

While she might not be taking a diplomatic trip to Vietnam any time soon, it looks like Ivanka is still keeping busy working to empower women's economic opportunities.