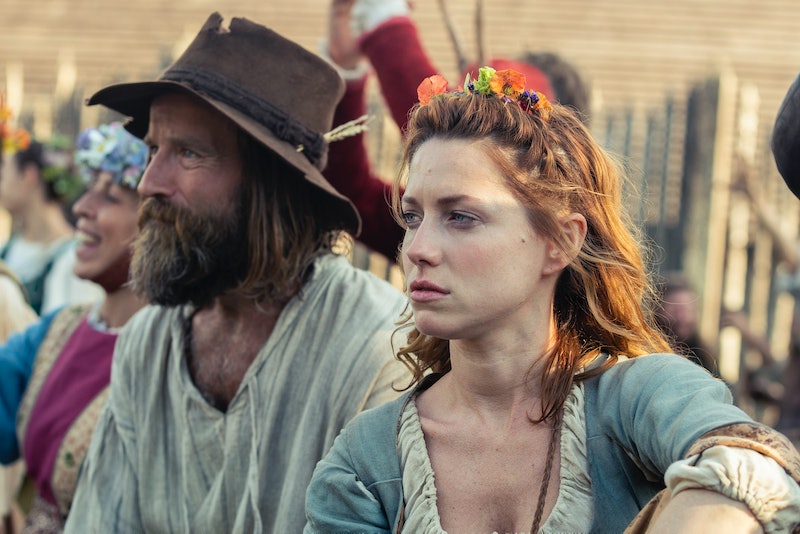 The Sky period drama Jamestown tells the story of the first English settlement in America. Among the residents of Jamestown are three women who, after leaving their lives in England behind, are expected to marry some of the male occupants of the small town. The series is set in the 17th century, and stars Naomi Battrick, Sophie Rundle, and Niamh Walsh — and the final season is currently available to watch on Sky. But is Jamestown based on a true story?

In terms of the characters and storylines featured throughout the period drama, there has been no confirmation as to whether or not the series is based on a true story. I have reached out to Sky for comment, and will update with any new information once it becomes available. However, the backdrop of the series, which follows the three protagonists (Jocelyn, Alice and Verity) as they travel overseas to a new settlement in order to marry strangers, is very much based on true events. The drama is set in Virginia in 1619 and, according to the Daily Mail, Jamestown, Virginia, really was the first permanent English settlement in the county that went on to become the United States of America. And, the newspaper reports, for the first 12 years of its settlement, it was populated only by men.

As previously reported by Bustle, the Sky series stars Naomi Battrick, Sophie Rundle, and Niamh Walsh as characters Jocelyn Woodbryg, Alice Kett and Verity Bridges, respectively. When discussing the true events upon which Jamestown is based with the Daily Mail, Rundle touched upon the unbelievable reality women in the 17th century had to face. She said:

"It’s also extraordinary that it really happened, that these women got on a boat and travelled across the world, to unknown territory, and were assigned to men they’d never met, knowing that they’d been there for 12 years without any women."

Rundle then went on to say that the struggles faced by the women is one of the main focuses of the show. She said: "Can you imagine how terrifying that was? But it really did happen. Life was really tough out there, and you sense the frustration about how powerless they were. That’s a real theme of the show — these women were bought by these men who would sell land to acquire them, and expected to just get on with it."

As reported by the Metro, the third season of Jamestown also stars Mad Dogs actor Max Beesley as a villainous farmer known as Henry. Beesley's on-screen younger brother, Silas, is played by Stuart Martin, and the Governor and Governess of Virginia are portrayed by Jason Flemyng and Claire Cox, respectively. Joining the series as a new cast member is actor Ben Batt, known previously for his roles in Captain America: The First Avenger, Shameless, and more.

When speaking about joining the Sky period drama, Batt told Metro: "I am delighted to have joined the Jamestown cast; it’s such an incredible show. I am excited to see how my character, Willmus Crabtree, shakes up the dynamic among the settlers, and I am really enjoying working with such a talented cast and crew."

Jamestown series three currently airs on Sky One on Fridays at 9 p.m. and is available on NOW TV.