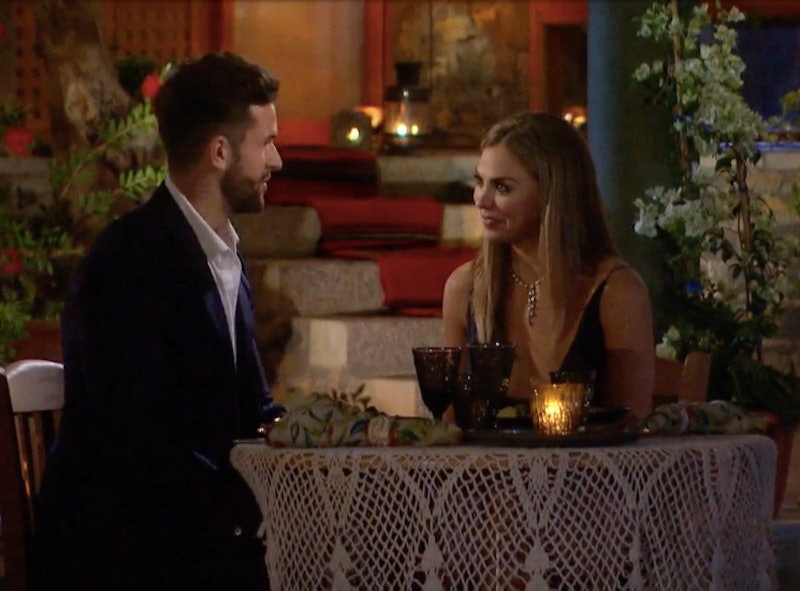 One of Hannah's remaining three guys is incredibly close to accepting her final rose. For a while, it seemed very likely that its recipient could be country musician Jed, but after the release of some alleged information from his ex-girlfriend, there's now a chance that Jed is single after The Bachelorette. The fandom is super close to getting the closure its been waiting for, but for now, Jed and his peers remain tight-lipped when it comes to his relationship status.

Every fan of the show who's been paying close attention recalls that Hannah told Jed she was falling in love with him, which is a big deal, considering she doesn't have to say anything about her feelings as The Bachelorette, and when she does, her words carry a seriously heavy weight. Jed admitted that he reciprocated those feelings, and the whole exchange made it seem very likely that Jed could walk away from the finale an engaged man.

That vibe shifted a bit when hometowns came along. Hannah was incredibly excited to meet the family of a guy for whom she just confessed her love, but unfortunately, they didn't seem as equally excited to meet her. When Hannah asked Jed's mom if he'd be ready for marriage in a few short weeks, she said, more or less, that he would be too busy focusing on his music career. Jed's sister, whom he's very close with, echoed that sentiment when she said she wasn't sure if their blossoming love affair was in good timing.

From the perspective of many viewers, including Bachelor alum Kendall Long, that awkward visit seemed like it could foreshadow an impending breakup between the couple, or at least a slight riff in their relationship. Oddly enough, they seem to have moved past it for now. They did have some tough conversation on their date in Greece regarding Hannah's relationship with Luke P., but now that he's out of the picture, that topic is (presumably) no longer an issue.

Now, it's unclear whether or not Jed's ex-girlfriend Haley Stevens' allegations that they were a couple when he left for the show impacted his on-screen relationship with Hannah. If they did, there's a good chance Jed is single now. As fans will recall, Jed admitted to Hannah early on that a main reason he auditioned for the show was to take advantage of the publicity it could provide for his music. He didn't expect to actually fall in love, but he did, which is exactly what Stevens was afraid of.

Jed has not yet directly addressed the accusations, but he did share an Instagram post claiming that he's "not able" to answer any questions on the matter just yet:

"Several of you have reached out with messages and questions. Please know I’m not able to answer right now, but as soon as I’m able to, I will. Until then, I ask that you please understand how much the actions being taken towards myself, my family, the men on the show, and above all, Hannah, are affecting all of our mental and physical health. It goes beyond what is said online. Threatening letters and phone calls have been sent to our homes. My parents and sister are being verbally attacked in public. I beg you to remember what seems like a harmless action is damaging to real people. I want to thank all of you who have reached out or reserved judgement until I am able to speak openly and I can only ask for your patience and kindness until then."

In an interview with People, Bachelorette host Chris Harrison addressed the controversy and said he plans to give Jed the floor for explanation during the live two-night finale that premieres on Monday, July 29. "I want to hear Jed’s side of the story. I think a lot of people have spoken, and before we judge — which we’re so quick to do on Twitter — I would like to hear from him," he said.

If fans are lucky, they'll hear from Jed during part one of the finale, but there's a good chance producers will prolong the anticipation and save his speech for last. Regardless of when it happens, it should reveal some specifics and provide the clarity — which seems to be a theme this season — that everyone is looking for.

More like this
Where Is Former Bachelor Host Chris Harrison Now & What Is His Net Worth?
By Hugh McIntyre
Clayton & Susie Broke Up, Citing "A Significant Amount Of Pain" After 'The Bachelor'
By Jordyn Tilchen
Everything To Remember About Lace Morris Before 'Bachelor In Paradise' Season 8
By Grace Wehniainen
Why Did Lace's Fake Her Birthday On 'Bachelor In Paradise'?
By Kadin Burnett
Get Even More From Bustle — Sign Up For The Newsletter