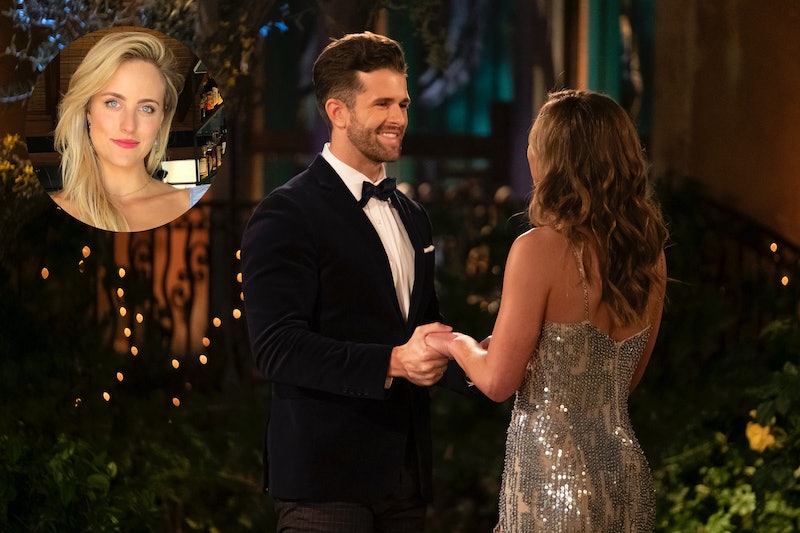 While competing on Arie Luyendyk Jr.'s Bachelor season and Season 5 of Bachelor in Paradise, Kendall Long experienced love and heartbreak on national television. Now that she's been through it all, she has plenty of words of wisdom for new contestants, and she's dishing all to Bustle. Read what Kendall has to say about Hannah's hometown dates on The Bachelorette and more in this week's recap.

It’s hometown week on The Bachelorette! I like to call this week the make-or-break week because this is the week the families get involved… and they do have questions. Speaking from my experience, this was the week that the Bachelor Bubble popped and I started freaking out. After traveling around to random locations on a romantic quest for love and not seeing my family for months, I was all of a sudden a ghost in my hometown: I was home, but I couldn’t contact anyone I knew or go to my usual spots for fear of being spotted.

What they don’t show on TV is the time you spend as a contestant waiting for your hometown date. During this time, you can pretty much do what you want with your producer (within reason). For me, this meant going to basketball games, getting facials, going out to restaurants, and exploring my hometown as if I were a tourist with my producer Eddie and his lovely girlfriend.

I say I freaked out his week because after finally seeing my family for the first time in months (and yes, we only got to speak on camera), I was left with the reality that I could actually be engaged in a few weeks, which is daunting for even the most romantic of individuals.

My experience aside, it looked like this week actually went pretty great for most of the guys. One of the men who is “over the moon” for Hannah is Peter, whose hometown date was pretty much picture perfect.

Peter picks Hannah up in his “baby,” a car whose make and model I won’t even pretend to know (after proofreading this with Joe, he says it’s “obviously” a Mercedes and I should be ashamed of myself). All I can say is it was black and it housed a (thankfully unused) condom. We all know Peter is going to fly Miss Hannah B. up in an airplane, and I’m all for it!

Back on the ground, it’s time to meet Peter’s family, who are the sweetest! Peter is more than willing to put his feelings out there with his family, telling both his mom and dad he feels like he's found his person. This sends his giddy mom even higher to cloud nine, and reduces his father to tears. I fell in love with Peter’s dad in the moment he tearfully explained, “I only want what’s best for you.” You can tell there is a lot of love in this family, and with that comes the fear of their son’s broken heart. As Peter fails to say the “L” word and kisses Hannah goodbye, I am left feeling that Peter may be more into Hannah than she is into him, which becomes even more apparent on the next hometown date with Tyler.

Tyler greets Hannah in sunny Florida, where he whisks her away on a boat ride. It is obvious that they have A LOT of sexual chemistry, and as the two gaze off to a lighthouse in the distance, I’m reminded of the upcoming “windmill” incident and think that maybe Tyler could be a candidate. It seems like Hannah can't keep her eyes (or hands) off of Tyler, which sets him apart from the other men still left standing. Hannah jumps on stage and sings with a band before performing the only two-person stage dive I’ve ever seen:

After their performance, the two set off to meet Tyler’s family, and we see a refreshingly vulnerable side of Tyler. Tyler’s dad almost died two months before filming began, and his vocal chords have been paralyzed. When the two see each other for the first time in months, their loving embrace, combined with the fact that Tyler’s dad calls Hannah “Ms. Hannah B.,” is almost too much to bear.

It’s hard to imagine this hometown going any better as Hannah sits down with Tyler’s dad for some one-on-one time. When asked if Tyler is ready for marriage, his dad has the perfect response. “You can’t plan to fall in love,” he begins, “it just hits you right between the eyes. I’m ecstatic for him, if that’s the way it all turns out.”

As Hannah and Tyler sit down for their last talk, Tyler lays it all out there, saying he's falling in love with her. Judging by Hannah’s face, I’m guessing the feeling is mutual. Tyler walks Hannah to her car, where the two get hot and heavy in the back seat (I can only imagine this is quite awkward for the driver) before Hannah finally drives off into the night. Two hometowns down, two to go.

Luke is up next, and I’m left thinking this hometown could go either way. He greets Hannah in Georgia and brings her to join in on Sunday school with his friends. It was crazy to see the contrast between how the men treated him in the house versus how everyone at the church gets together and sings his praises. In Luke’s defense, for some people, being on reality TV can unfortunately bring out he worst in them. On my season we saw that with Krystal, and now she is happily married to the man of her dreams!

At Luke’s family home we see a similar reaction. Hannah doesn’t hold back one bit exposing all the struggles she and Luke went through, leaving Luke’s family in shock that he could ever be perceived that way. “That’s not like my son” Luke’s father says. The family thanks Hannah for putting up with Luke’s naughty behavior and assures her that his character is anything but malicious, which clearly gives Hannah some relief. When Luke sits down with Hannah and declares that he's in love with her, I honestly believe him. It’s easy to see their future together after this hometown. Though future previews have me doubting he is “the one,” for now, let's bask in the fact that, hey, maybe Luke isn’t an awful guy.

With all of these hometowns going so well, it’s almost impossible to think that Jed’s could be any different… or is it?

We start off in a recording studio, which comes as no surprise seeing that Jed’s love for music is a solid theme throughout his experience on The Bachelorette. The two put together a song reminiscing on their time together. As a seasoned performer, Jed takes the lead with most of the singing as a bashful Hannah faintly sings along. At the end of the recording, Jed confesses his love for Hannah, catching the moment on the mic. I’m expecting to hear that sound bite on his next album.

The day portion of the date goes good enough, but unfortunately for this singing pair, Jed’s family seems less than pleased to have Hannah as a guest in their home. “She looks like she is a hoot,” Jed’s dad says as he sits down with his son, but it's clear that Jed's family is less interested in their son’s love life and more into how it might affect his future stardom.

The sad thing is, I’m pretty sure Jed’s feelings are very genuine at this point and his family’s negative attitude is neglecting his need for assurance during a very vulnerable and confusing time. Jed’s sister even says she isn’t sure if the match is a good thing… ouch. An awkward goodbye is even more of a sting as Jed’s family proves to be a solid rock wall, void of any kind of support for this “journey” Jed is going through. Jed seemingly pretends the whole encounter went well as he kisses a defeated Hannah goodbye.

Judging by how all the hometown dates went, it’s clear to me that the only man who was left lacking that much needed support and positivity was Jed. Hannah seems torn at the rose ceremony, giving roses to Peter and Tyler then having to step out for a good freakout and chat with Chris Harrison.

“I’m going to close a door on a relationship that isn’t done,” Hannah confesses to Chris.

In the other room, the divide is clear as Luke is left alone under the spotlight with all the other men huddling to get in a good trash-talking. Hannah returns to the group and expresses her struggles. As soon as we think all hope is lost and both Jed and Luke may be going home, Chris Harrison comes in to save the day, placing two roses on the golden pedestal. Joyful music starts playing, which greatly contrasts the look of bewilderment on the men’s faces when they realize they both will be continuing on. Jed is NOT happy at all with this outcome, complaining that it feels like a concession and a "toss up" between him and Luke.

This week rattled the foundation of what was seemingly one of the strongest connections on the show up until now. With next week’s shenanigans looming in the previews, I am left thinking that fantasy suites will be anything but a walk on the beach.