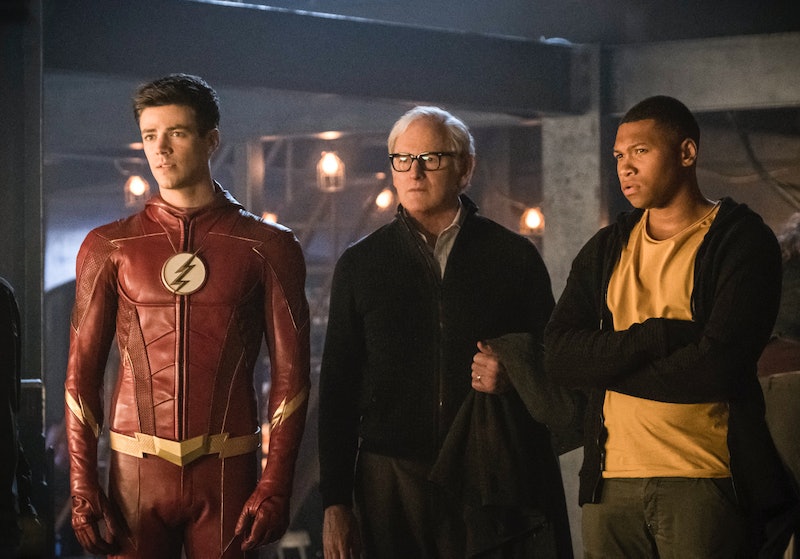 "Crisis on Earth-X" was the biggest Arrowverse crossover event yet, so it only makes sense that it would also be the setting for one of the Arrowverse's most tragic goodbyes. Dr. Martin Stein died in "Crisis on Earth-X," changing the Legends of Tomorrow team forever. Stein's death isn't only tragic, it's also a huge blow to the mythology of the show. Is Jefferson still Firestorm after "Crisis On Earth-X"? With one half of Firestorm down for the count, where does that leave the team?

Stein and Jefferson weren't just in Central City as wedding guests in "Crisis on Earth-X," they were also patients. Caitlin, Cisco, and Harry prepared a cure of sorts for Firestorm — a serum that can separate their DNA and, thus, break their bond. Once Stein became Firestorm, he needed that bond to survive, but with the cure, he can retire from the Legends and be a father and a grandfather. Stein is thrilled, but Jefferson not so much. He's not only going to be losing his powers, he'll be losing the closest thing he has to a father. Seeing how put out Jefferson is, Stein makes a new serum for him, one that would give him some spider abilities — or, really, one ability: to stick to things. This way, he could continue being a superhero with the Legends even without Firestorm.

Before the two can talk, let alone take the cure, they're kidnapped by Nazis from Earth-X and taken to an alternate Auschwitz (yes, really) to die. After being saved from a Nazi firing squad by Ray, a new Earth-1 transplant superhero (he lives on Earth-X now), and Leo (the Earth-X version of Snart), Jefferson and Stein only really had one thing on their minds, and that's getting back home. Long story short: they, along with Oliver, Sara, Alex, Barry, Ray, and Leo attack the Nazi base in an effort to get to the breach to go home. The attack is complicated — the facility is surrounded by anti-meta tech that makes it impossible for them to use their powers, meaning Oliver has to go undercover as his Nazi Earth-X self. And, in the chaos of the fight, Stein sacrifices himself to save Jefferson, turn off the metahuman dampeners, and open up the breach gateway allowing them to go home. He's shot multiple times in the back, and Jefferson merges with him to keep him alive until they can get to Gideon and the Waverider.

In the end, it's no use. Stein's injuries are fatal, and the only thing keeping him alive is his biological connection to Jefferson. In a heartbreaking scene, Stein urges Jefferson to hand him the new cure, one made by Gideon to separate them, so that he can die and Jefferson can live. Jefferson is willing to die with Stein if it means keeping him alive longer, but Stein refuses. "How could a father do anything less?" he says.

Stein's death is shocking to the entire team, not just the Legends. With a final battle against Nazi Oliver on the horizon, the heroes need all hands on deck, and with Firestorm out, they're one man down. Luckily, they manage to defeat the Earth-X Nazis without Jefferson, but what happens after that is unclear. The team stays in town for Stein's funeral, but they leave Central City soon after, supposedly with Jefferson. It's possible that Gideon was able to use Cisco's cure as a base to make a new, better serum that could separate Stein and Jefferson while allowing Jefferson to keep his Firestorm powers. Or maybe Jefferson will stay on as a human Legend for the time being. Either way: the Legends will never be the same.

Losing Stein and Firestorm isn't the only change to the Legends after "Crisis on Earth-X." After the battle was won and the day was saved, Ray chose to return to Earth-X to continue fighting the Nazis, but Leo stayed behind. That's right: Captain Cold is back. We didn't see him get on the Waverider, but it definitely looks like Leo might be back on the team. Either way, he's back on Earth-1 and ready to do some good (this version of Snart is a total do-gooder).