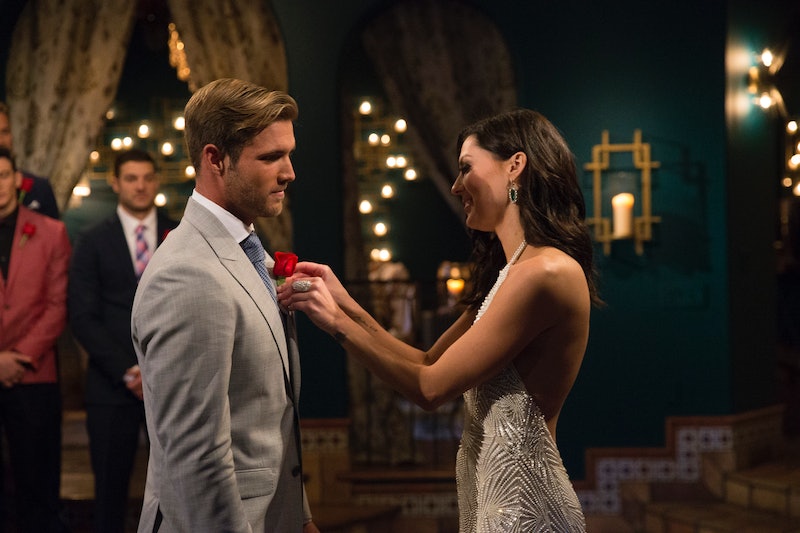 With his eye-catching antics, his obvious love for attention, and his camera-ready face, Bachelorette contestant Jordan is working hard to keep fans entertained during Becca's season. But it's sometimes hard to believe that anyone's personality could actually be as extreme as this 26-year-old male model from Florida seems to be, and some fans have wondered if he's putting on an act. Is Jordan from The Bachelorette for real? Let's investigate how authentic the model's behavior truly is.

Jordan made himself a focal point of the season the minute his heels clicked into the mansion. He said his footsteps were "the heartbeat of a gentleman." At first, his personality seemed abrasive and sure to rile up the other guys (which it has), causing some to speculate that he'd be the villain of this Bachelorette season. But no matter his intentions, he seems to know exactly what he's doing.

Jordan's Twitter is brand new, and his Instagram doesn't really display much more than modeling shots, so it's hard to get a sense of what his behavior in real life is actually like. What does exist on his Twitter, though, suggests that his passion for fashion and clothing wasn't just cooked up for the show. And according to their website, Jordan actually is signed with Wilhelmina Modeling in Miami. Wilhelmina is a noted modeling agency — America's Next Top Model fans will remember it as the company winners of the competition were granted a contract with in years past.

Still, some fans speculate that Jordan is playing a character this season — one that he knows will spark controversy and get some laughs.

"I feel like he's trolling the guys and providing some fun for Becca!" wrote Reddit user crabbierapple. "I hope she keeps him around a bit longer." "Jordan is having fun," wrote another user, makemyday007. Though some Twitter users are convinced that Jordan is the most obnoxious person to ever grace the show, there are also plenty of others who suspect Jordan's gaming the system to just have a good time and climb the fame ladder.

Some have even come up with weirder reasons for Jordan's continued presence on the show. Nick Schwartz — who writes about The Bachelorette for USA Today Sports, providing hilarious weekly "power rankings" of the remaining guys — put forth another interesting theory. Schwartz writes that because Becca really hasn't had any emotional connection with Jordan thus far, but has continued to keep him around, perhaps the two are in cahoots. "Jordan remains on The Bachelorette not because he’s legitimately competing, but because he’s a plant by Becca to expose other undesirable men in the house," Schwartz writes.

This is definitely inching toward conspiracy theory territory, but it's fun to speculate, and Jordan does throw plenty of the other men off their games. David and Colton in particular have been riled up by Jordan (perhaps rightfully so, in some instances), and neither one has kept his cool. Whether it's intentional or not, Jordan has become the perfect litmus test to show Becca who can withstand the pressure of constantly being around someone who grinds their gears.

There's really no way for viewers to know if Jordan is being genuine on The Bachelorette. No matter what ends up making it to air, there's also a certain amount of editing that goes into the show, and that could cast anyone in a light that isn't actually representative of their true selves. We could speculate for hours about whether Jordan really is this much of a personality, or if he's putting on a show for entertainment — but in the end, does it matter?

Jordan is goofy, but he hasn't seemed conniving or deceitful. Plus, it would be hard to find a season of any reality show that doesn't feature contestants who are eager to play things up for TV; that's kind of the name of the game. In a season of off-screen controversies (Lincoln Adim was convicted of indecent assault and battery in May, per The New York Times; Garrett Yrigoyen "liked" a series of reportedly offensive Instagram posts, per The Huffington Post), Jordan has been a welcome and so far harmless reprieve. Regardless of his authenticity, he knows how to get a laugh.