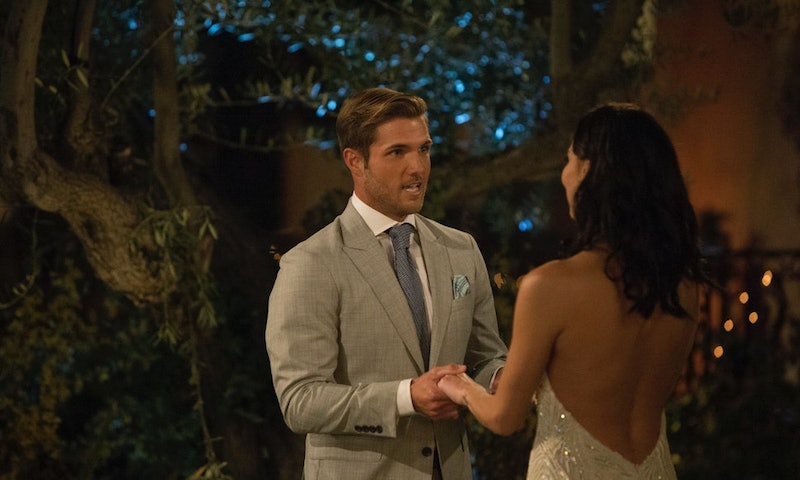 It's no secret by now that Jordan is one of the best and worst things about The Bachelorette this season. Right off the bat, he was a little vain, excessive, and a bit of a questionable character. But he's grown to be so much more. Any screen time for Jordan is a welcome reprieve from a few unfortunate The Bachelorette casting choices, and an otherwise so-so season, if only because he is so ridiculous. Viewers always want more of these kinds of suitors, so it's definitely fair to wonder will if Jordan will be on Bachelor In Paradise?

While there's no official word just yet — especially since he's still in the running for Becca's affections — there are plenty of people who are hoping Jordan makes an appearance on the franchise's spin-off. "I hope he ends up on BiP and becomes much more of a fixture in the Bachelor Universe," wrote Reddit user radcupcake about Jordan. Some are even wishing he'd get a season of The Bachelor all to himself, even though some further down in the Reddit thread joked that he wouldn't pick a woman at all and would instead end up with himself. That, and they'd have to rename the show "Pensive Gentleman," of course. Say what you want about Jordan, but he's darn good entertainment. And it seems like he knows exactly how he's playing the game.

For seasoned Bachelor Nation natives, Jordan definitely doesn't come off as someone who's going to win the whole thing. But at this point, who cares? He and Becca seem like they have a good time together and also has plenty of other men to choose from when she gets bored of listening to him explain his wardrobe decisions. Basically, he makes for good television, much to seemingly every other cast member's chagrin. Which means that until she (or a savvy producer) sends him packing, viewers can revel in his quotable lines and gut-busting antics.

Twitter is conflicted when it comes to the male model's future on the franchise. People either want Jordan to stick around for entertainment this season and hope he eventually gets kicked off so he can make it to Paradise. And for most people, it's a little bit of both.

People Just Can't Get Enough Of This Guy

There's still no final word from ABC on who's going to appear on Bachelor In Paradise, though true fans can probably make some good educated guesses. Cast announcements are likely coming soon, though, as ABC just confirmed that Bachelor In Paradise is set to premiere on August 7, which means they're likely already filming. The information doesn't mention who will be showing up, but it does give an idea as to what kind of former cast members tend to be picked. The network wrote:

Breakout fan favorites from The Bachelor and The Bachelorette are back and ready for a second (or third) chance at finding love. While they may have been sent home broken-hearted, now they're all getting the opportunity to travel to a romantic paradise in hopes of finding true love.

Jordan definitely counts as a fan favorite at this point, despite being pitted as sort of a villain. He's also definitely be a welcome addition on Paradise. Already this season on The Bachelorette, Jordan has run around in his skivvies, been gifted a set of golden underwear, laid devastating, if cheesy, insults on some of the other guys, and given lots of smoldering looks into the distance.

Now, imagine him doing all of that all over and over on a beach in Mexico. Good stuff, right? You just know that Jordan has plenty of vacation casual outfits to flaunt on those sandy shores. Even if he somehow missed the cut for the upcoming installment of the spin-off, he'd be a great candidate for future seasons. Come on, ABC, give the fans what they want.

This article was originally published on June 22, 2018