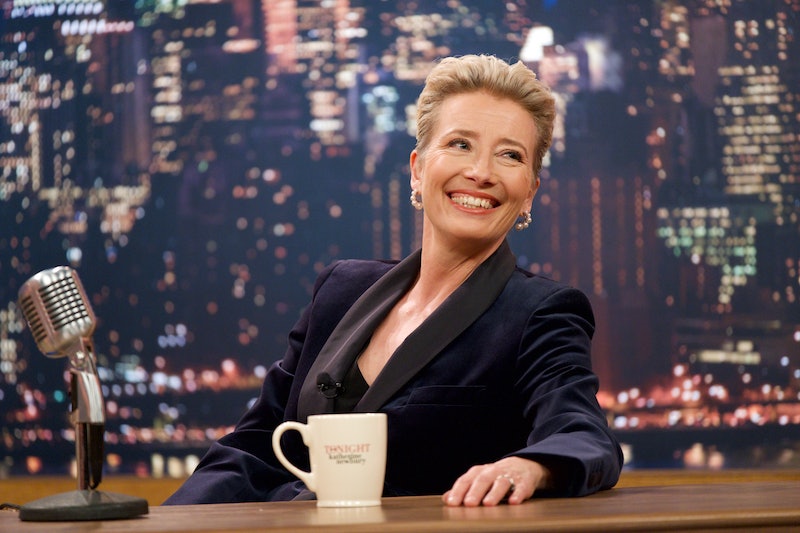 In Late Night, Emma Thompson plays a long-time talk show host who has to revamp her show after she comes under threat of being ousted for a younger male host. If this scenario doesn't sound familiar that's because Katherine Newbury from Late Night, out June 7 in select cities and opening wide June 14, isn't based on a real person. And that's because long-time female late night network talk show hosts aren't yet a thing in real life.

"You've just got your first late night talk show host that’s a woman," Thompson said during an interview about the film on the Today show. "This is a kind of super real... It’s very strange, because you haven't got any late night talk show hosts that are women." She added later in the interview about the fact that her character has hosted a show for 30 years, "It's science fiction, basically."

With her "you've just got your first" comment, Thompson was no doubt referring to Lilly Singh, who will be the only woman hosting a late night talk show on network TV when her NBC show premieres in the time slot post-Late Night with Seth Meyers that was previously held by Carson Daly.

Basically, while women have hosted late night talk shows, if we're looking just at the U.S. where Late Night is set, there haven't been any long-running ones. (Notably, Joan Rivers was the first woman to host a network late night show in 1986, but Fox's The Late Show with Joan Rivers aired for less than a year.) So, there isn't really one person for Katherine to be based on, because no one like her exists.

Instead, Late Night writer Mindy Kaling says that the character is based on an amalgamation of people and ideas. "No one believes me, but truly the character is a composite of a lot of different influences," Kaling told Entertainment Weekly. "There are certain late-night talk show hosts that bear some of the same resemblances to her impatience and not wanting to know her staff, but some of the other details — the fact that she numbered her staff instead of learning their names, that comes from a famous sitcom star." She didn't reveal which one, however.

Kaling wrote the role for Thompson, specifically. While Thompson is known for her many dramatic period pieces, she started out as a comedian and improv performer herself, so knowing what Kaling did of her also had an effect on the character not being based on one person. "It’s also because it’s Emma doing it," she told EW. "I think I wasn’t really interested in doing a sendup of a specific person, it’s truly supposed to be an original character."

The writer-actor also spoke of forming the character in an interview she and Thompson did together with the Associated Press. "It was very easy to research because almost all of my friends have been fired from a late-night talk show," Kaling said. "There are so many great disgruntled stories of impossible hosts and mean bosses."

Kaling also was able to pull from her experiences as both an up-and-coming writer (she even interned on Late Night with Conan O'Brien herself as a college student) and as the woman literally running the show on The Mindy Project.

"I remember vividly what it's like to be the new person in the room, the only minority, like it was yesterday, even though it was 15 years ago," she told the AP. "I also remember distinctly being the star and the showrunner of a show that I've been doing for 117 episodes and I'm impatient and grouchy and I'm paid a little bit too much and everyone is telling me yes all the time and I myself have a temper."

Thankfully, once Kaling put all of this together with Thompson in mind, the Oscar-winning actor was willing to take on the role. Thompson told the AP that she has been offered roles that were written for her before, but they aren't always so appealing.

"The only other times it's happened I've always been an elderly archaeologist or geography teacher or someone developing dementia or Alzheimer's or someone whose spouse has died horribly and I've got to deal with it," she said. "So interestingly, yeah, this is the first time someone has said I've wrote you something, and not only is it funny but also incredibly smart and irresistible."

It's pretty wild to think that there won't be a real woman like Katherine Newbury until at least 30 years from now, because Singh hasn't even gotten started yet, but it would be great if other women could follow in her footsteps — and soon. Hey, give Emma Thompson her own late night show. If she were actually down, no one would complain.