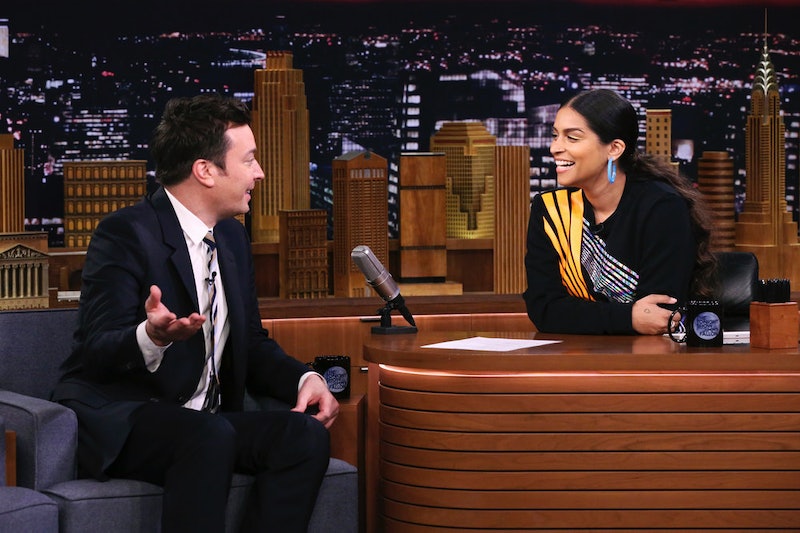 The late-night space on network TV is finally getting some desperately needed fresh blood. YouTube star Lilly Singh will have her own late-night show on NBC, titled A Little Late With Lilly Singh, which will make her the only woman hosting a late-night show on broadcast TV. Singh announced the news on Thursday, March 14, during an appearance on The Tonight Show With Jimmy Fallon. She'll be taking the time slot that was previously occupied by Last Call with Carson Daly, meaning she'll follow Late Night With Seth Meyers. And it marks a major milestone, for the performer and for television itself.

Singh, also known as Superwoman, has more than 14 million subscribers on her YouTube channel and her videos have amassed nearly three billion views since she joined the platform in 2010. Now, with her NBC show, she's going to attract a whole new audience. During her big announcement, she told host Jimmy Fallon that the new show will be "kind of like my YouTube channel, but just, you know, now I have more than three staff members." All kidding aside, she added, "I'm so excited because I truly get to create a show from scratch. I get to make it inclusive, I get to create comedy segments, and interview people and really create something that I believe in and I'm so honored and humbled, truly."

Since she's now part of the "NBC late-night family," Seth Meyers also stopped by The Tonight Show to congratulate her on this major news. And Daly sent his well-wishes via Twitter, writing that the multi-talented comedian has "more than earned this moment."

In her big announcement, Singh also made a point to thank all the female hosts of late night shows past. "I gotta just say a huge shoutout to all the women who've been before me and are currently in the space because I couldn't have done it without them paving the path," she said. (In fact, this same time slot has been hosted by a woman before, Cynthia Garrett, who hosted Later With Cynthia Garrett for one year in 2000-2001.)

With A Little Late With Lilly Singh, the YouTube star might be the only female late night host on a broadcast network, but she won't be the only woman in late night across the board. She'll join Busy Philipps of Busy Tonight on E! and Samantha Bee of Full Frontal with Samantha Bee on TBS.

But as Singh noted herself in her statement to NBC, she's representing more than just women with her new show. The late-night space is dominated by white males. So Singh joins Trevor Noah of The Daily Show as one of only two people of color currently hosting nightly talk shows on TV. Not to mention the fact that Singh recently came out as bisexual, making her a rare LGBTQ presence in late night.

Since the announcement, there's been an outpouring of support for Singh on social media, with celebrities like Dwayne 'The Rock' Johnson and Janelle Monáe sharing their excitement. Over the years, many stars have been featured in Singh's YouTube videos — like Nick Jonas, Priyanka Chopra, The Rock, John Legend, and Selena Gomez. So not only is it heartening to see these celebs recognize the importance of Singh getting her own show, but it's also an indication that Singh will be able to draw big names to A Little Late.

A Little Late with Lilly Singh marks a major accomplishment for Singh professionally and personally. And with her focus on inclusivity, she'll make sure this exciting moment for late-night TV becomes something everyone can celebrate.