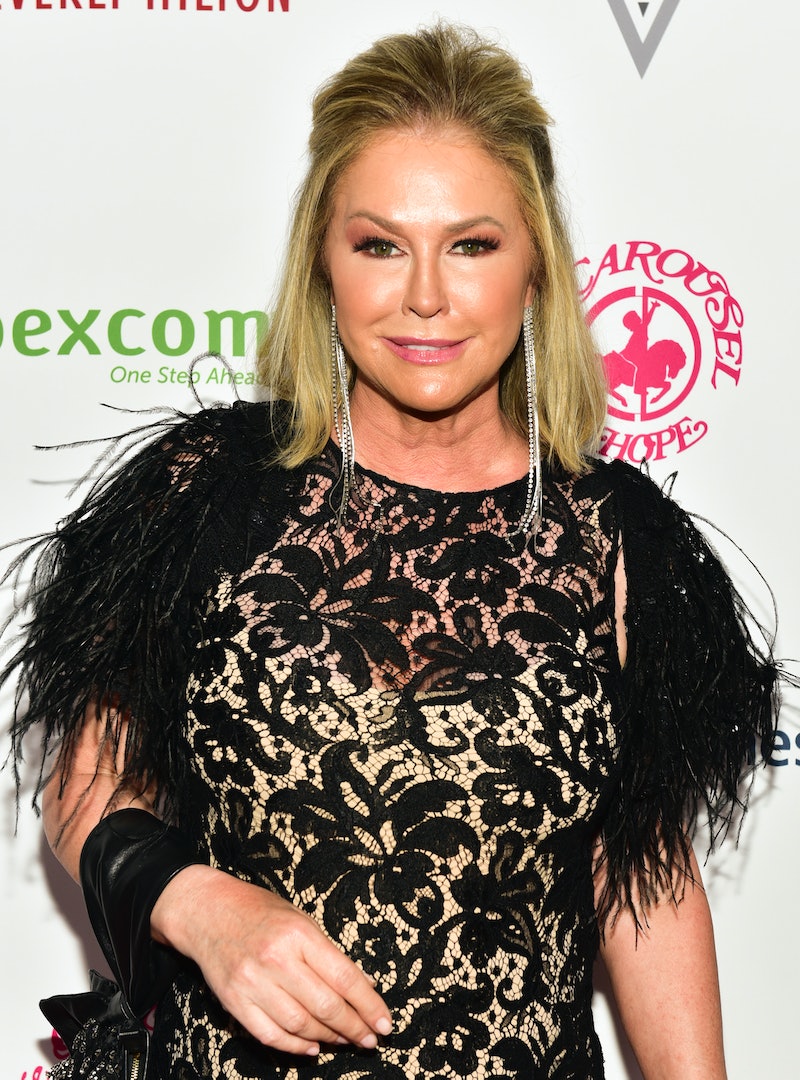 Goodbye Lisa Vanderpump, hello Kathy Hilton? That could be the surprise move Bravo franchise Real Housewives of Beverly Hills is taking if the latest casting rumors are to be believed. Speculation started after a very suggestive Instagram post by Bruce Bozzi, aka one of RHOBH exec producer Andy Cohen's besties. It led fans to conclude that Hilton was joining Real Housewives of Beverly Hills for its upcoming 10th season.

Bozzi's potential Internet-breaking post came on Saturday, June 8 after a long week in RHOBH drama. First came rumors that Vanderpump was leaving the show, then came her absence from the Season 9 reunion, then came confirmation that one of the OG housewives would be departing. Bozzi posted a photo of Cohen and Hilton with the caption, "Sign on the dotted line... a true diamond in Beverly Hills.. @kathyhilton! #RHOBH! @bravoandy GoodNight LA6/7/19," alongside a few diamond emojis.

Hilton seems like a super natural fit to join the cast of RHOBH. Her two sisters Kyle and Kim Richards have each held diamonds of their own on the show. While Kyle has been on every season of the series, Kim appeared on five seasons before taking on a guest star role in recent years. But this latest casting news could signal that all three sisters will be on Season 10. Can. You. Imagine. The. Drama?

It seems like Cohen, who moderates each Real Housewives reunion, has definitely imagined what storylines Hilton would bring to the show. All three sisters have had their ups and downs with one another on and off-screen. In seasons past Hilton and Kyle weren't on speaking terms because of her depiction of their childhood in the short-lived Paramount TV series American Woman. While Kim and Kyle had conflict over Kim's friendship with former Housewife Brandi Glanville.

While it looks like Kyle, Kim, and Hilton have recently reconciled, Real Housewives of New Jersey's Teresa Giudice and Melissa Gorga will tell you how easily sister drama can arise. Plus, after a season in which the central drama was Puppygate, Hilton's casting could inject Real Housewives of Beverly Hills with some new life.

It's unclear how long Hilton has been in talks with the show (assuming that she has been...). But her casting could pre-date the LVP drama. Hilton's daughter Paris was on an episode of Watch What Happens Live with Andy Cohen on May 14 where she addressed whether or not she would ever join her Aunt's show.

Paris plainly responded, "No. First of all, I'm not a housewife. I'm not married, I probably never will be." She went on to say that though she gets daily offers to return to reality television, "After The Simple Life, like how do you compare to that show?" When asked what her theoretical tagline would be, she replied, what else, "That's hot."

Perhaps this planted the first seed in Cohen's head about an RHOBH season with Kathy Hilton. While fans fantasize about the possible addition and draft dream taglines, Hilton's rumored casting might be mentioned on the upcoming Season 9 reunion.