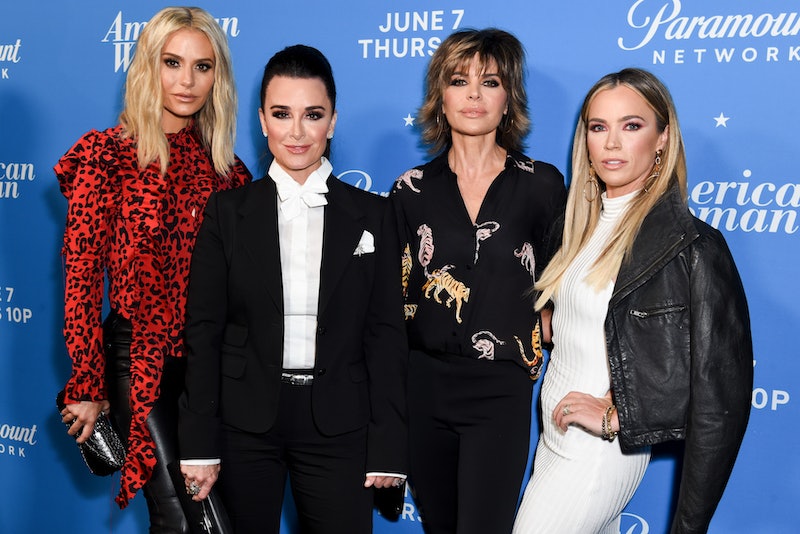 Week after week, the juicy, juicy, apple juicy drama surrounding some Real Housewives of Beverly Hills stars and a dog rages on, like a swan charging after Kyle Richards across Villa Rosa's bridge. While they won't answer every question about this mess, Teddi Jo Mellencamp's comments on RHOBH’s Puppygate fiasco do shed a little more light on this debacle— namely, how she ended up in the middle of the dog saga starring Dorit Kemsley, a puppy called Lucy Lucy Apple Juice, the Johns Sessa and Blizzard, and Lisa Vanderpump.

In a new interview with Entertainment Tonight, Teddi recounted the moment that apparently prompted her to team up with LVP against Dorit. “There was something that happened after the [Season 8] reunion, where I was in the car with Kyle, and Lisa was in the car with Dorit, and we were all supposed to go to dinner,” she told ET. “Then Lisa called and she was like, 'Oh, Dorit refused to go to dinner if Teddi is there.’” According to Teddi, this was one of several instances where Dorit was uncool to her after RHOBH Season 8. Teddi said she went to LVP about the tension brewing between her and Dorit, and according to Teddi, some of the folks at Vanderpump Dogs eventually roped her into LVP's Puppygate scheme.

If you're like "What's a Puppygate? Is that something you can get at Petco?", first of all, how did you end up here? Second, it's one of the more convoluted Real Housewives feuds in recent history, but I'll do my best to sum it up quickly: Dorit adopted a dog from LVP's dog rescue, but the dog and her family did not mesh well. But instead of giving the dog back to LVP's dog rescue, Dorit passed the dog along to some woman. The dog ended up in a shelter, and LVP was unhappy with this development. But LVP did not want to talk about this on camera

In the Season 9 premiere, Teddi and a Vanderpump Dogs employee made a point to bring up the dog drama in front of the Bravo cameras. And now Teddi says that this was part of LVP's plan to get Dorit's dog drama on the show without having to be the one to bring it up. Teddi did tell ET she did not speak with LVP about Dorit’s dog drama directly, but she believes she masterminded the whole thing.

“It was all through the Vanderpump Dogs people,” Teddi explained. “There was no doubt in my mind that this was Lisa and Vanderpump Dogs wanting me to do it. I regret going down that road at all. I should’ve from the get go said, ‘You know what? This doesn’t involve me. Leave me out of it.’ But I didn’t.”

Boy, did she ever get involved. As we've seen in the last several episodes of RHOBH and on social media, Teddi wound up knee-deep in text message print outs, rumors about pet ownership, and drama with the Johns Sessa and Blizzard. Lucy Lucy Apple Oops.