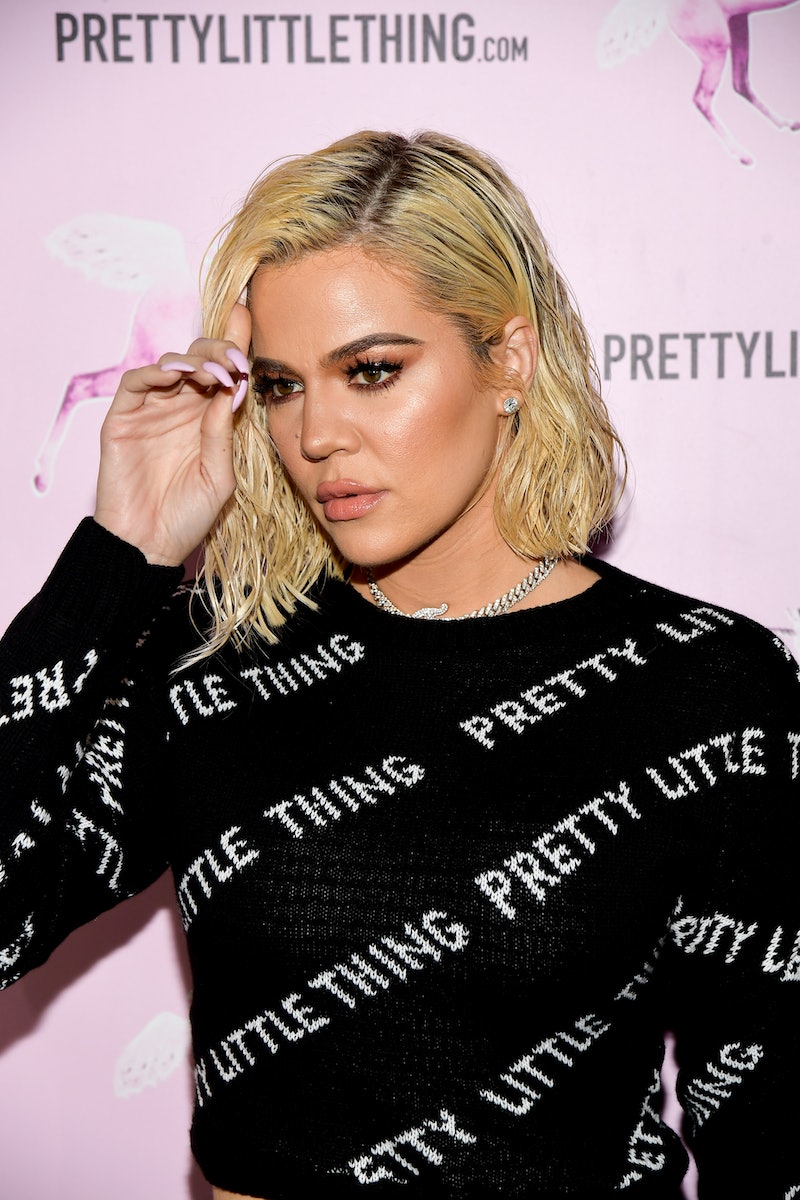 Remember when Khloe Kardashian was a brunette? The Good American brand owner has been several shades of blonde for such a long time that it's easy to forget that she actually rocked chestnut strands when she first arrived on the scene. Well now, Khloe Kardashian has long pink hair, which she showed off while hanging out with her sisters at a party. Then she debuted another, totally different pink hair look via an ad on her Instagram. Both sets of pink locks were unexpected but you'll be here for them.

Earlier this week in L.A., Kardashian attended the launch party for her little sister Kylie Jenner's Kylie Skin range. She was sporting a major, millennial pink ponytail. Since the reality star has been wearing a textured, golden lob lately, her flowing, straight pony, which was swung with her as she moved, was very likely the work of extensions or a wig. It also looked like a true ombre pink, since the color was much darker at the roots and got progressively lighter down the shaft

Kardashian's hair and her glossy, latex jumpsuit certainly matched the packaging for the Kylie Skin products and the color scheme for the event, which was decidedly powder pink. Karadshian essentially gave a master clinic in how to rock that monochromatic look.

It was a pink party but Kardashian took things to the next level. She owned it with her matchy-matchy presentation.

In an image posted on her Instagram for a product she is promoting, Kardashian showed off a somewhat darker pink ponytail. The coif shade was a cool contrast to her matte mauve lips and her hot pink workout wear.

It's fun to see Kardashian swapping out her familiar blonde locks in favor of something trendy for the summer. She can get adventurous and likes to experiment with styles. She used a temporary pink tint back in December, adding a soft cast to her white hot, long and wavy locks. But for the most part, Kardashian doesn't switch out her hair color as drastically as, say, Kylie. She does, however, like to play with different blonde tones. In addition to pit stops at platinum, Kardashian has gone with honey, buttery, and golden blonde hues over the past few years. She also changes up her length. It's not unusual for Kardashian to have a mega mane that spills down her back in a cascade of waves one day and a choppy, stick straight bob the next.

It's truly anyone's guess how long Kardashian will keep her pink hair. She may return to her beloved, buttery blonde on the quick. Whatever the case, she'll continue to blow her fans away with killer styles they'll want to copy.