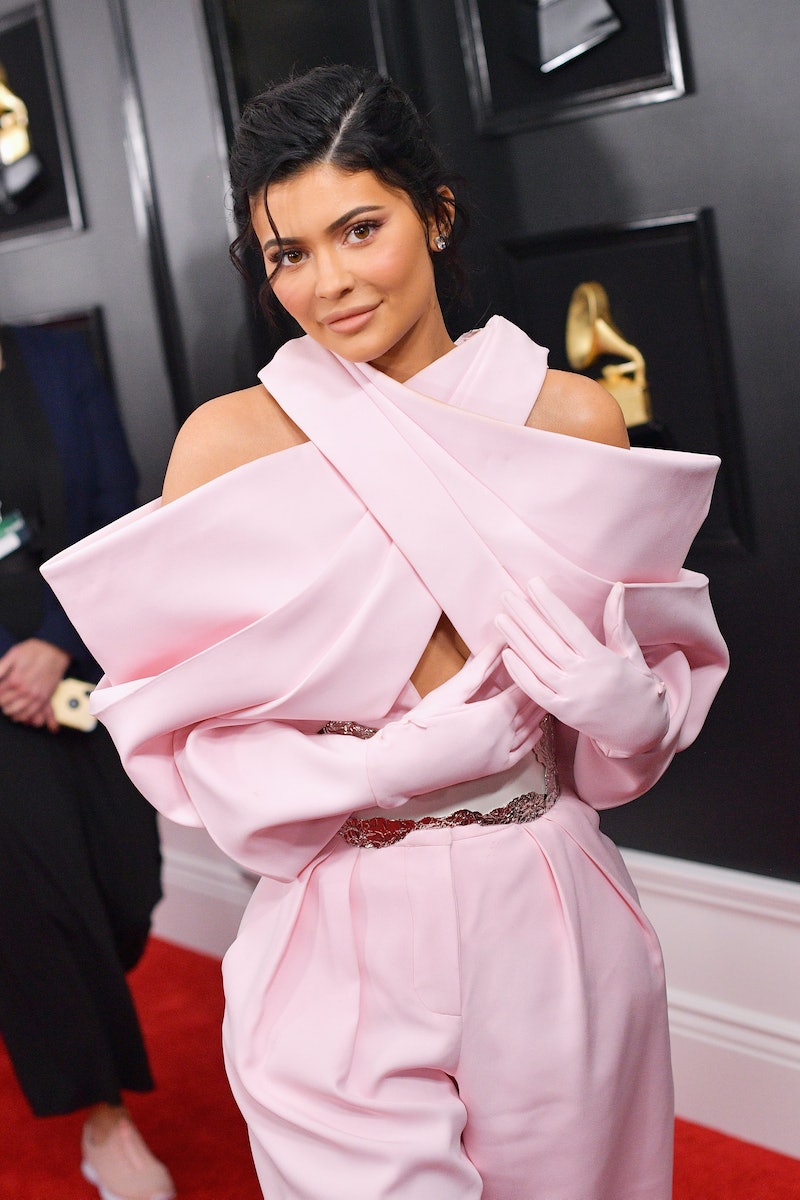 You seriously need a dry erase board to keep up with all of the Kardashian and Jenner coif changes. The family members switch up their strands with incredible frequency. Kylie Jenner chopped her hair off into a long lob — and her short'ish style looked exactly like a 'do her big sister Kim Kardashian West recently rocked. Clearly, the sisters serve as sources of inspo for one another.

Jenner posted several photos on her personal Instagram over the weekend, showing off markedly shorter strands. While on vacation in Turks & Caicos just two weeks ago, Jenner was all about her long locks, which fell beyond her butt. She even fastened her hair into a rope-like braid. Now, Jenner has ditched those mega extensions and is enjoying shoulder-skimming black strands. The chop is an excellent choice for summer, especially with August's normally hot weather on the horizon.

In the first set of shots that Jenner shared on July 28, she wore her long lob in a half-up, half-down style. The makeup mogul pulled the front and side pieces up in a high pony atop her head. This '60s mod look mimicked the frosted brown lob that Kardashian West debuted earlier this summer. Consider it the Kardashian x Jenner sisters' take on Ariana Grande's signature strands.

Jenner's black locks matched her all-black ensemble, which consisted of a one-shoulder top and leather leggings. The monochromatic outfit got a pop of color from her hot pink heels and sunglasses.

But it was the haircut that was most memorable. Jenner's much shorter hair is indeed a look that fans have seen from her before. But it feels like such a drastic and dramatic change simply because her followers were used to her mega mane and the statement braid that she was showing off earlier this month. This style is a little bit longer than most lobs since it hits at her shoulders. But it looks absolutely killer.

Take another gander at Jenner with her newly shorn locks styled in a totally different way than the previous up and down 'do. The deep side part and the visible barrette were solid late '90s and early '00s touches, as were her leather joggers, white crop top, and dad sneakers. Jenner hit on a lot of trends at once with this look.

In case you missed it or we longing —ahem — for Jenner's mermaid-like vacation braid, here's a visual reminder. That plait was epic AF. Jenner actually made plenty of other fashion "waves" while on vacation — with both her swimwear and her hair. The Kylie Cosmetics guru wore a baby blue Chanel bikini that came out before she was even born.

Jenner paired that headline-grabbing Chanel swimsuit with long, flowing waves. Those extensions are now gone in favor of the long lob.

There's really no telling whether or not Jenner will keep the lob or add more length courtesy of fresh extensions. She likes to switch things up on the regular and keeps fans guessing. This style is certainly wearable and something her millions of fans can copy. It might inspire you to get a similar snip to keep and look cool during the summer swelter.