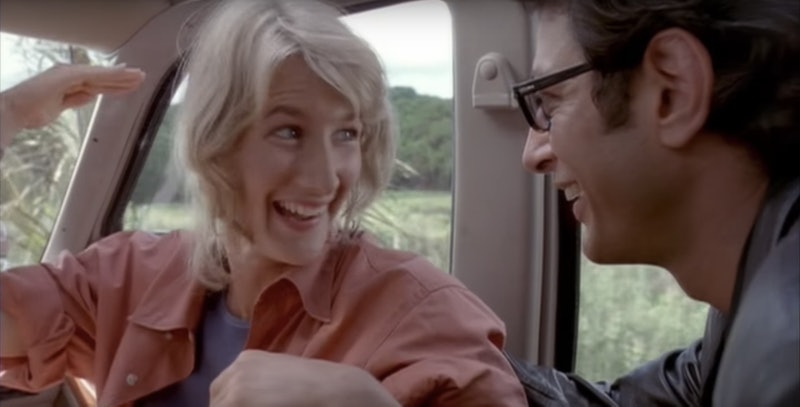 Welcome to Jeff Goldblum spills the secrets of the new Jurassic World. Specifically, Goldblum said that Laura Dern may be returning to Jurassic Park — or maybe she isn't? At this point, Goldblum has got everyone confused with his recent comments, but also excited about he prospect of paleobotanist Ellie Sattler making a cameo in an upcoming sequel.

See, when Goldblum appeared onWatch What Happens Live! on Monday night, he talked about reviving his character Dr. Ian Malcolm for Jurassic World 2. Unfortunately, he says it is more of a cameo than anything else. "I have a scene in front of the senatorial committee talking about dinosaurs," he explained. Anyone who's seen the trailer for Jurassic World: Fallen Kingdom, though, already knew this since Goldblum pops up in the clip to give the moral argument over bringing the dinosaurs back. "These creatures were here before us," he says, "and if we're not careful, they're gonna be here after."

That answer might have been underwhelming for those hoping to see a shirtless Ian Malcolm in the new movie since "a scene" in front of congress doesn't really call for that. But Goldblum hinted he could return in later sequels — Jurassic World is going to be a trilogy, FYI — along with Dern. “I can’t divulge anything,” he said playing with his many rings, “but maybe maybe maybe she will.”

Unable to help himself, though, Goldblum did say that the third movie, slated for release in 2021, which "some people may or may not be in, that's all I can say." That's a whole lot, though.

On WWHL!, Goldblum admitted he might have said too much in a recent interview with Entertainment Tonight, which sparked this question of Dern's role in an upcoming Jurassic World sequel. When asked about rumors that Dern might be back, Goldblum said, "I don't want to pass on gossip like my character," before, of course, gossiping. "But it would be good news to me and to everyone, [to] millions and billions of people all over the world all over the universe and cosmos when Ellie Sattler returns," he said, clearly getting people's hopes up.

Goldblum isn't the only one who'd like to see Ellie return. Back in December, Dern was asked about reprising her Jurassic Park role and she told Entertainment Tonight, "[It] could be fun. I mean, I love Ellie Sattler." Dern even seemed to pitch why she should return saying, "She's a tough feminist! We need her back."

The last time audiences saw Ellie was in 2001's Jurassic Park III when her last name was Degler, so it would be fitting to see her make her return in the final installment of this new trilogy. It also wouldn't be that unexpected since it's rumored that Sam Neill, aka Dr. Alan Grant, could also return for Jurassic World 2, which will be written by Emily Carmichael (Pacific Rim) along with Colin Trevorrow. This means there's a chance that all three leads from the original could be back together on screen.

Dern has yet to comment on Goldblum's hints that she'll be back, but maybe the real question of whether she'll appear in the movie is if she has time. After all, she just started filming the second season of Big Little Lies, and from the looks of a recent photo, she is ready to get back in Renata's shoes. Of course, fans would like to see her back in Ellie's khaki shorts.

So is Goldblum telling the truth? At this point it's unclear, but maybe the better question is: Does it matter? If Dern is not slated to make an appearance in the upcoming Jurassic World sequel, this rumor Goldblum is peddling is a good way to get her on board. So what do you say Laura, you in?