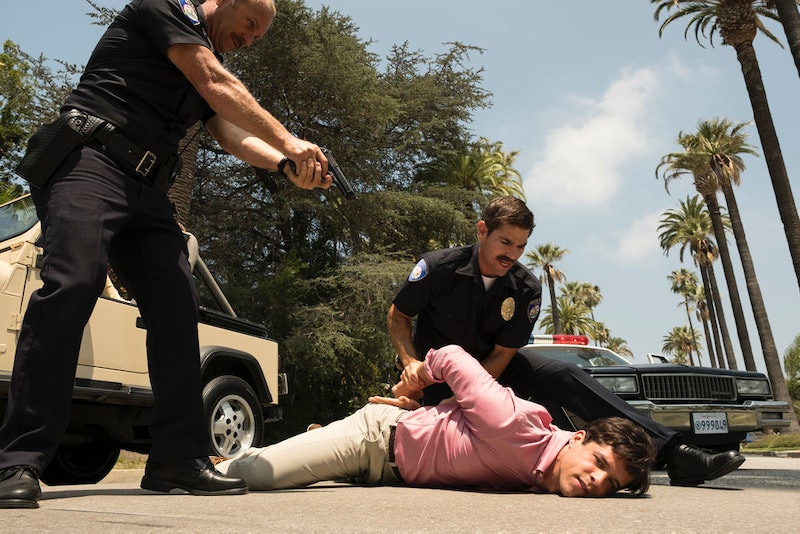 The Law & Order franchise has been the golden standard of scripted crime shows since the original show debuted in 1990. But, though certain episodes of these shows have often been inspired by real-life events, it wasn't until the 2017 premiere of Law & Order True Crime that the franchise tackled a real life case. Season 1 drew viewers in with the compelling story of the Menendez Brothers, but will there be a Law & Order True Crime Season 2? Though nothing has been officially announced yet, interviews with showrunners Dick Wolf and René Balcer reveal that they're already thinking about what cases they could potentially tackle in a second season.

In an interview with EW, Balcer shared some cases that he and Wolf had discussed bringing to life in True Crime. "The Tim McVeigh case, the Oklahoma bomber case: in light of what happened this weekend in Charlottesville, it’s very topical. This is going to be in discussions with the network, obviously. They are footing the bill for all of this,” Balcer told EW.

McVeigh was responsible for the deaths of 168 people, who died as a result of a truck bomb blast that McVeigh had constructed at the Alfred P. Murrah Federal Building in Oklahoma City on April 19, 1995. He was found guilty of 11 counts of conspiracy and murder in June 1997, according to the New York Times, and The Guardian reports that he was executed by lethal injection in June 2001. Balcer also discussed the possibility of bringing the Oklahoma City bombing to life with The Hollywood Reporter, stating that,

"Just before the [Television Critics Association summer press tour], I had mentioned to him the Tim McVeigh case, and his eyes lit up, because Dick and I were together, we were in the same office when the bomb went off in Oklahoma."

Wolf has also tossed around a few other infamous killers as possible subjects of a second season. IndieWire reports that, along with McVeigh, Wolf has considered serial killers Richard Ramirez (known as the "Night Stalker") and David Berkowitz (known as "Son of Sam"). Considering the appetite for true crime stories in recent years, choosing to make the next installment in the series about a serial murderer would surely draw in a large audience.

The inspiration for the newest addition to the Law & Order franchise was inspired by FX's hit series, American Crime Story: The People v. O.J. Simpson. “Obviously, Ryan Murphy did the O.J. case,” Balcer said in the same interview with EW. “Naturally, we would do the Menendez Case.” Wolf and Balcer picked the case — in which brothers Lyle and Erik Menendez were convicted for the murder of their lavishly wealthy parents, José and Kitty Menendez, and sentenced to life in prison, according to the Rolling Stone — specifically so they could tackle certain social issues they felt were pertinent our current moment.

“We didn’t want to reach too far back in the past for a case,” Balcer continued. “The ’90s. One was the O.J. case, and the other one was the Menendez case. O.J. spoke to race and racial politics in Los Angeles. The Menendez case spoke to the privilege, the go-go ’80s and early ’90s, and a sense of entitlement.”

Maybe the next case selected by the Law & Order team would have a similar pertinence to the current times. The McVeigh case, for example, would speak to the dangers of political extremism and combat the dangerous Islamophobic rhetoric still pervasive in our country. Balcer echoed this sentiment to The Hollywood Reporter:

It seems like Law & Order True Crime will be the latest successful installment in the ridiculously popular franchise. If the long-running SVU is any indication, the series could be around for quite a while. (Dun dun!)