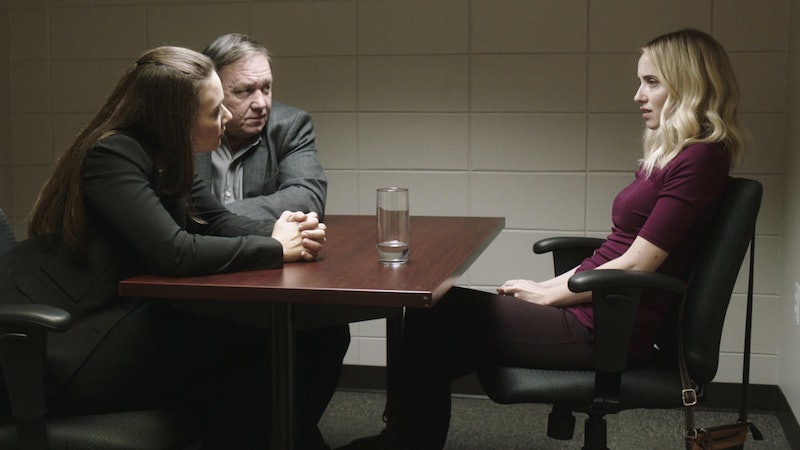 If your plans for Mother's Day weekend include watching movies about characters who can't remember whether or not they murdered their moms, Lifetime's latest may just foot the bill. As part of Lifetime's "Don't Mess with Mommy Movie Marathon," the network is releasing Did I Kill My Mother?, a thriller premiering Saturday, May 12. But before tuning in Saturday, audiences may want to know if Lifetime's Did I Kill My Mother? is a true story.

While there's no evidence to suggest that the movie grounded in real life, its plot sounds just plausible enough to be terrifying: "A year after her father's unsolved, suspicious murder, a young woman's mother is found dead in the home they both live in," the film's synopsis reads. "The police think she may be the murderer, and she and her friends have to prove her innocence, while they dig deeper into the real killer's hidden life."

Did I Kill My Mother? stars Megan Park as the accused Natalie Romero, who is on a mission to clear her name. Park is best known for playing Grace Bowman on The Secret Life of the American Teenager. Coincidentally, her character felt responsible for her father's death, because they got in an argument before he died in a plane crash, per the show's wikia. The Lifetime drama also stars Karina Willis as Natalie's friend Shelby, and Alicia Davis Johnson as Laura Romero, who is presumably the protagonist's deceased mother.

Rounding out the Did I Kill My Mother? cast list is Stephen Colletti, who plays Natalie's friend, Brody. And if you're thinking, "Hey, that name sure sounds familiar," you're probably right. Colletti played Chase Adams on One Tree Hill — the Clean Teens member who dated Mia Catalano, before going on to appear on Laguna Beach. During the reality show's run, he was romantically entangled with Kristin Cavallari, as fans of the show may recall.

More recently, however, Colletti was Taylor Swift's love interest in her 2009 "White Horse" music video and will appear in an upcoming comedy pilot, Everyone Is Doing Great, which he co-created with fellow One Tree Hill alumnus James Lafferty (Nathan Scott). The show will premiere this June at ATX Television Festival, per Variety, and a smaller screening already took place at Kansas City FilmFest, according to Twitter.

But as for how these actors' stories will play out in Did I Kill My Mother?, it remains to be seen. "The police are connecting all the wrong dots," Natalie says in the trailer. "What do I do?" "You connect the right ones," Brody (Colletti) answers. However, it seems like someone is working against them to frame Natalie, if the trailer is any indication.

Viewers will see her being arrested for something presumably planted in her car, then interrogated by the police. "You were the last person to see her alive," one of the detectives says. "I don't think I want to answer any more questions," Natalie answers. However, her unwillingness to talk sounds pretty incriminating, to be honest!

But who exactly is trying to frame Natalie? Or perhaps — and this is even more terrifying — she did kill her mother and has simply repressed the memory, like a type of selective amnesia. Or maybe she hasn't forgotten at all and is just an incredible liar. Not to mention the fact that Natalie's father's murder was never solved, which means the killer is still at large.

My hunch is that her parents' killer is a family friend, who, as revenge for some past ill (which viewers will no doubt discover!), is slowly taking out each member of the Romero family. Remember the part of the synopsis that says that Natalie and her friends "dig deeper into the real killer's hidden life"? There's got to be something audiences don't know.

Whatever this murderer's hidden life has in store, and whether or not Natalie actually killed her mother, get ready to veg out this weekend, Lifetime-style.