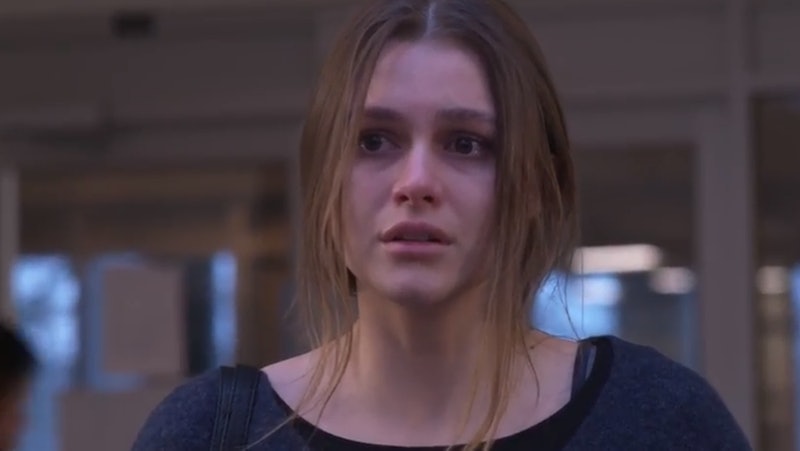 What do you get when you combine Lifetime drama with a Halloween twist? The answer is Zombie at 17, which debuts just in time for the spooky holiday on Oct. 27. It’s not surprising that the network would want to cash in on the Halloween and zombie TV craze that pulls in tons of viewers who love all things creepy, and perhaps not surprisingly, Zombie at 17 isn't based on a book or anything else. This is all original content, Lifetime, fans. And Zombie at 17 is also the perfect Halloween season movie if you'd rather laugh than hide under the covers.

According to Lifetime’s description, the film stars Celeste Desjardins as Tia Scott, a teenager who recently lost her sister in a hit-and-run. But, things get strange when Tia discovers that she has caught a virus that is slowly turning her into a zombie. She teams up with Flynn, a.k.a. the self-proclaimed paranormal expert and classic TV trope loner at her school, to see if they can discover a cure. The drama ramps up when her boyfriend Connor is murdered by a friend named Jason (no, not the hockey mask wearing one) and she has to solve the crime before she goes full zombie.

Tia brings her mother Kate and an eccentric doctor into the fold to hopefully stop the disease and keep her safe from Jason. Yeah, it’s a lot for just one movie, but Lifetime can’t resist adding a dramatic flair on top of already dramatic circumstances. Now that you know a bit more about Zombie at 17, here’s a few reasons why you should check it out this Halloween season.