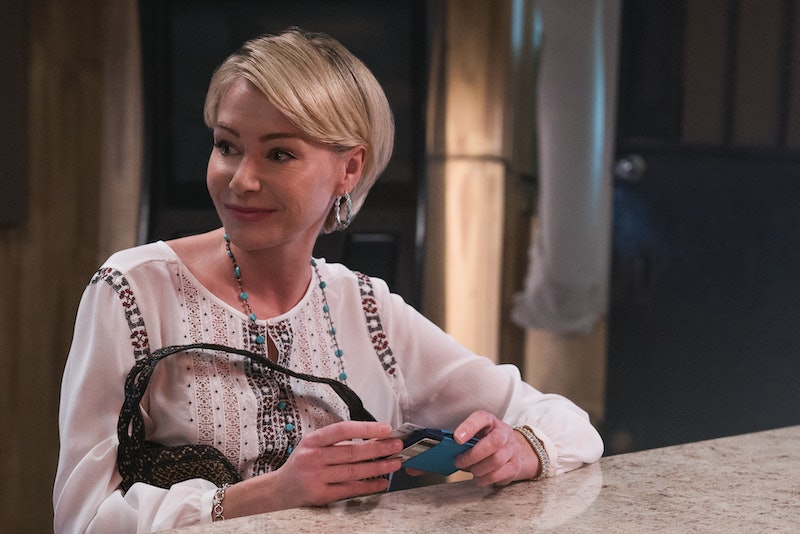 The first part of Season 5 debuted in May 2018 and it picked up where Season 4 left off with Lindsay taking over Herbert Love's Congressional campaign. However, de Rossi only physically appeared in four of the eight episodes — and besides the odd sheet shrouds that Lindsay was donning, you probably noticed something was off. It was obvious that for the majority of her scenes, de Rossi wasn't even in the same room as the rest of the cast and had been green-screened in. Fans might have been able to accept this to be in-character for the zany family comedy, but the truth was that de Rossi had retired from acting. So, as Arrested Development creator Mitch Hurwitz explained to Entertainment Weekly, he was grateful for any time she was willing to give, but Lindsay's part had to be greatly reduced.

Lindsay hasn't been seen in the present since the fifth episode of Season 5, "Sinking Feelings." During Lucille's Family of the Year speech (which she stole from Maeby), Lindsay realized her mom's acceptance had been a "waste of a dream," so she abandoned her political campaign and went off to find her biological mother — but not before she conveniently got into the habit of covering herself with a sheet so that DeBrie could impersonate her with ease at the Second of July parade.

While you might think that the second half of Arrested Development could follow Lindsay's search for her family, the trailer hints at no such plot. And don't be misled by the fact that de Rossi is featured in a photo at the start of the trailer and the Season 5 Part 2 date announcement. That image with Lindsay in a blue dress appears to come from the same promo shots that the actors did in character for the release of the first half of Season 5 last year.

For those that haven't been keeping up, De Rossi decided to stop acting in 2017 so she could pursue a different business opportunity. She told The Hollywood Reporter that she had Shonda Rhimes write her off of Scandal. And shortly after her character's last appearance on the show, de Rossi began posting about her new business — General Public. The art publishing and curation company sells reproductions of artwork and officially launched in spring 2018.

Ahead of the Arrested Development Season 5 premiere in May 2018, de Rossi stopped by her wife's talk show, The Ellen DeGeneres Show. DeGeneres noted that de Rossi isn't a "big fan of doing press and talk shows," but Rossi did explain she gave up acting because she wanted to try a new and challenging career. However, Hurwitz wasn't so ready to let Lindsay go. "I called Mitch Hurwitz, who's the creator of Arrested Development, and I said, 'If there is a Season 5, I won't be doing it because I quit acting.' And he seemed really understanding and he totally got it. We had a great conversation, and then he wrote me into five episodes," de Rossi said on The Ellen Show. "Don't know how it happened, but yes, I am on Season 5."

Then, DeGeneres' DJ tWitch presented de Rossi and DeGeneres with a $50,000 donation to The Ellen DeGeneres Wildlife Fund courtesy of Arrested Development. The couple joked that this generosity was the show's way of bribing de Rossi to do a Season 6 to which she replied, "I'm yours. Look, once a Bluth, always a Bluth, I say."

And that wasn't the only time that de Rossi said she'd return from retirement specifically for Arrested Development. At the premiere of the first half of Season 5, Renée Bargh of Extra asked de Rossi if she would always be game to play Lindsay Bluth Fünke. "Maybe," de Rossi replied. "It has always been the highlight of my career just because it's so brilliant and I love Mitch and I would do anything for Mitch and everybody. So yeah, yeah, I'll come back."

While the future of a Season 6 is unclear, de Rossi did mention on The Ellen Show that she's in five episodes of Arrested Development Season 5. She only showed up in four episodes of the first half (if you ignore an appearance via flashback in the seventh episode), so perhaps she'll have a brief appearance in the new season.

Even if de Rossi doesn't come back for the role, a young Lindsay will be featured. Entertainment Weekly reported that the younger versions of George Sr. and Lucille have been recast with real-life married couple Taran Killam and Cobie Smulders. In the first-look photos shared by EW, you can see a young Lindsay in the scene. Plus, Debris could do her Lindsay impersonation again when she's not busy getting her Golden Girl on with Tobias and Murphy Brown.

Arrested Development fans will inevitably be disappointed that there won't be much Lindsay in Season 5 Part 2, but de Rossi is following her passion and you can't blame her for that. Plus, it's good to know that even though she quit acting, de Rossi will make an exception for the Bluths.