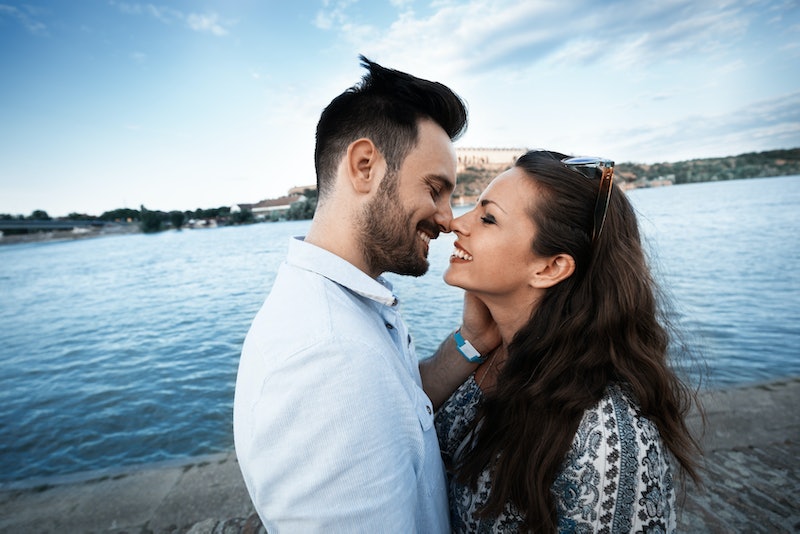 I used to think that love at first sight was just a thing of fairy tales and love songs. After all, cultivating care, trust, and everything else that goes into lasting love takes time. But now that I'm in a relationship with someone I knew I loved after two days, I'm left wondering, can that initial feeling mean something? Or is it unrelated to the love you eventually develop?

Seventy-one percent of men and 62 percent of women believe in love at first sight, according to an Elite Singles survey. NYC-based therapist Kimberly Hershenson, LMSW doesn't. "At first glance, people do not have sufficient knowledge about the person's characteristics, values, and desires in order to fall in love," she tells Bustle. "The initial attraction between people can be better coined as lust at first sight rather then love."

But "lust" doesn't describe everything I felt for my boyfriend in the beginning. Sure, it describes what I felt the first night, when we met in a nightclub and I went home with him, thinking it'd be a one-night stand. But two days later, he asked me to meet up, and after a day of talking on the beach, dinner, and dancing, we were laying in my hotel bed and I looked into his eyes and knew I loved him.

That was 10 months ago, and when I asked him when he knew he loved me, he described that same moment. I've gotten to know him quite a bit better since then, but there haven't really been any surprises. The love I felt on that second day is the same as the love I feel now. So, if love after two days can exist, love at first sight doesn't seem inconceivable.

A lot of people describe similar experiences. Ben Bryant, author of Waiting for Elizabeth, felt everything else in the room fade when he first saw his wife and asked her to lunch. "As we were eating our sandwiches, I told her that I felt like I knew her," he tells Bustle. "I just had the feeling that I knew her. This was the absolute truth. I knew that day she was my woman."

"My wife and I met online in a chat room. ... When the picture opened up, I felt like I had been hit upside the head with a ball bat," Robert, 59, tells Bustle. "When she stepped out of the car [for our first date], it was like the ball bat returned but was even more real than ever. ... A feeling flooded over me that I hadn’t had in more than 20 years, since the first time I had fallen in love. A fluttering in my stomach and… I knew this was THE one."

So, if we're defining love as a feeling, I'd say these reports alone prove that love at first sight's real. You can't really argue that someone didn't feel what they felt.

But Is It Just A Coincidence?

But does the feeling mean anything, or is it just a coincidence if things happen to work out with the person we feel it for? "A strong initial attraction to a certain individual is not uncommon. A lot of times it is due to chemistry, the 'je ne sais quoi' of attraction," Samantha Daniels, relationship expert and founder of The Dating Lounge Dating App, tells Bustle. "While love at first sight is not real, those feelings of strong attraction are real and should be taken seriously. If you find yourself locking eyes with someone or cannot help thinking about him or her day in and day out, then you should think about pursuing a relationship."

So, while very early feelings of love may not point toward compatibility, they do mean you enjoy being around that person and are attracted to them, and that's something. As Rhonda Milrad, LCSW, founder and Chief Relationship Advisor of Your Sage, tells Bustle, "love at first sight is a starting point."

Maybe It's A Bit Of A Self-Fulfilling Prophecy

Love at first sight may not be the foundation for a lasting love, but it can motivate you to develop one. And the fact that you're so attracted to the person can only help your relationship in the long run.

That's how it was with me. I wouldn't have pursued my partner if I didn't love him so much from the get go. He lived 4,000 miles away, and we didn't appear to have that many common interests. Without that feeling, I would've let him get away. But because of our love, we went for it anyway — and discovered we made a surprisingly good match.

That doesn't mean the other 10 months weren't necessary to maintain our relationship. As Nine Inch Nails sang, "love is not enough," and that's true whether you felt it at first sight or took years to develop it. A healthy relationship also requires acts of kindness, good memories, and being there for each other. Without those things, no amount of love can make something last.

So, love at first sight may not be a great predictor of a good relationship, but it could be a reason to test the waters. And then, if it happens to work out, you'll have a super romantic how-we-met story.

More like this
The Best Time To Date After A Breakup, According To Experts
By Bustle Editors
Is It A Rebound Relationship Or The Real Thing?
By Carolyn Steber and Lexi Inks
Are Quality Time & Physical Touch Love Languages Compatible?
By Lexi Inks
Cookie Jarring Is The Dating Term You Need To Know
By Sophie McEvoy
Get Even More From Bustle — Sign Up For The Newsletter