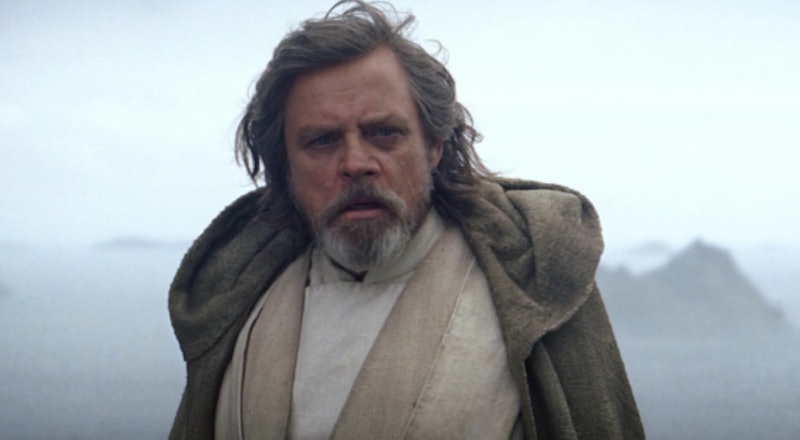 Well, it looks as though Star Wars: Episode VIII has a name, and it may be a little too foreboding for some fans. On Monday, it was announced that the next film in the franchise would be titled Star Wars: The Last Jedi, which definitely has a dark finality to it with that whole "last" part. I anticipate that Rey will be training to be a Jedi Knight, and that she'll make it through the end of this particular trilogy; the force is strong with this. However, one other Jedi is looking worse for wear, leading everyone into a nervous frenzy... will Luke die in The Last Jedi?

Calm down, kids. I think we need to look into the etymology of Star Wars before we start fearing for Luke's life. Concisely put, Jedi isn't just a singular noun; it's a plural noun. Sometimes, you'll hear a fair-weather fan spout out "Jedis" but that's simply grating and wrong. Do not let it confuse you. It's why when you look at previous titles like Return of the Jedi, "Jedi" could and probably primarily does refer to Luke, yet it still could encompass the return of the Jedi warriors as a whole.

As such, it's easy to assume that a similar thing is being done here. The "Last Jedi" could refer to Luke as a person, but probably not Rey by way of Luke dying mid-movie. Rey, for what it's worth, isn't really a Jedi yet. She has to go through all that training, and, while there's no longer a council to validate her status anymore, she's at least one montage away from getting to Knight level. Beyond that, "Last Jedi" could refer to both Luke and Rey being the last force sensitive folk in the galaxy (Leia, to her credit, is force sensitive, but not in the same way).

Another hint? Realistically, it would be pretty brutal to eliminate the last of the original Star Wars trio. As we all know, Han Solo was slaughtered at the hand (or at the lightsaber's end) of his own son, Kylo Ren, in the last movie. And due to Carrie Fisher's tragic death from cardiac arrest this past December, the franchise is going to have to find a way to gracefully write out Leia... or grossly substantiate her with CGI. Wookiees and robots aside, Mark Hamill feels like our last physical tie to the early aughts of the series.

Not that Stars Wars has been a franchise that's afraid to kill off your favs, and that alone should give fans pause. Panic, though, isn't warranted — not yet at least. The Last Jedi makes it's debut December 15, 2017, which leaves you plenty of time to fret. For now, though, I would focus on the return of the last Jedi (singular) versus his potential demise... clearly, we're going to be spending time with an old friend.