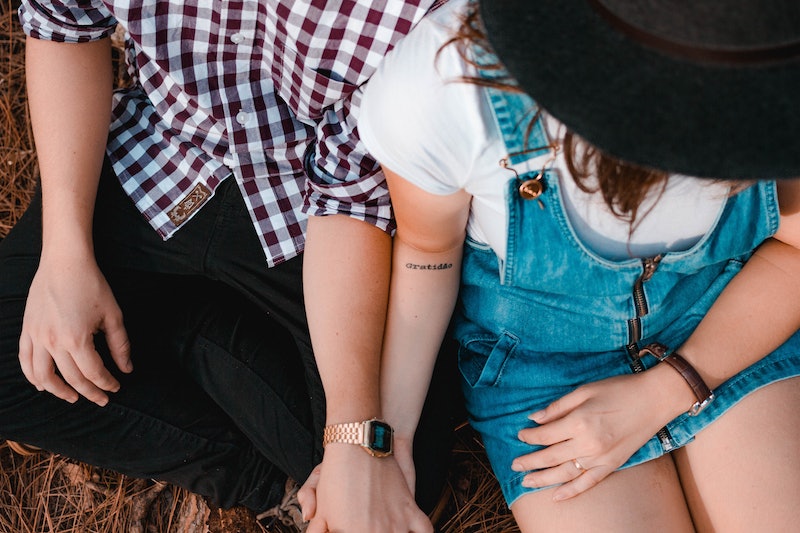 Money is a feminist issue — and yet, women are still reluctant to talk about it. According to a recent Bustle survey of more than 1,000 millennial women, more than 50 percent of people said they never discuss personal finances with friends, even though 28 percent reported feeling stressed out about money every single day. Bustle's Get Money series gets real about what millennial women are doing with their money, and why — because managing your finances should feel empowering, not intimidating. Today's topic: Nate Matherson, co-founder & CEO of LendEDU, explains why you might want to think twice before lying to your partner about finances.

How important is it to you that your partner or spouse is honest with you when it comes to money? Is it more important to you than fidelity? While that might seem extreme, it turns out that over 32 percent of Americans feel that their partners being dishonest about finances would be worse than cheating. At LendEDU, we surveyed 800 individuals who were either married or in "significant" relationships to find out how they felt about love, money, and financial secrecy. Not only did we find that a significant number of people valued honesty about personal finances above fidelity — but we found that responses split between men and women. About 36 percent of men believed that honesty was more important around money, while 28.5 percent of women believed the same. But even though we might value honesty, we may not always practice it. Here's what else our survey found.

We’re Not All Being Honest With Our Partners About Money

Despite the fact that honesty about finances is so important to one-third of Americans, it turns out that there are a lot of people who aren't being honest with their spouse or partner about money. Ten percent of people surveyed reported having a secret credit card or bank account that they used to spend money without their partner knowing, and more than 37 percent of people withheld information from a spouse or partner about spending on discretionary items such as apparel, accessories, electronics, and entertainment.

Money Is The Biggest Relationship Stressor For Many

Given those numbers, it’s not surprising that around 20 percent of people said they argue about money on a regular basis.

Are We Hiding Expenditures To Avoid Fights?

It might be that many of the respondents are hiding their financial expenditures in order to avoid fights with their partners around money. But given how important financial honesty is for many respondents, that might not be a good move over the long term. Here are a few tips to help you get better at talking to your partner about money and come clean about those secret accounts.

It's important to talk with your partner about your finances and goals. Perhaps you've done this in the past, but the financial goals that you made were too rigid and you need more flexibility in your budget to allow you the freedom to make the kind purchases that you're currently hiding from your spouse.

Or maybe it's important for you to have a degree of financial autonomy, but you currently have only one joint bank account and you jointly decide on all expenditures. Sometimes you just want to buy something frivolous and not be questioned about it.

It's OK to ask for more freedom in your finances, and to update your goals and budget if you feel like the ones you have are too rigid. Being open and honest is better than hiding things. One solution is to keep the joint bank account, but both also get accounts of your own.

Whether you decide to come clean about past purchases or not, it's critical going forward that you are open and honest about the purchases you make. Clearly articulate to your partner why these purchases are important to you. If you have a budget that you made together, it might be time for you to update it to allow you both to have the occasional splurge or to come up with solutions to cut back in other areas.

Financial advisors are useful for helping couples crystallize their financial goals so that they're both on the same path, but they also help mediate arguments and make it easier to talk about finances without fighting. Think of them like a kind and knowledgeable referee. They’ll help you stay focused on your goals and needs if you find yourself always fighting with your partner about money.

Nate Matherson is the co-founder & CEO of LendEDU. He started LendEDU in August 2014 while a student at the University of Delaware. LendEDU was created to help other students save money on their student loans, as Nate himself is still working to repay over $55k in student loan debt. Nate has offered student loan commentary to popular news websites such as CBS News, Yahoo! Finance, Washington Post, CNBC, American Banker, and others.