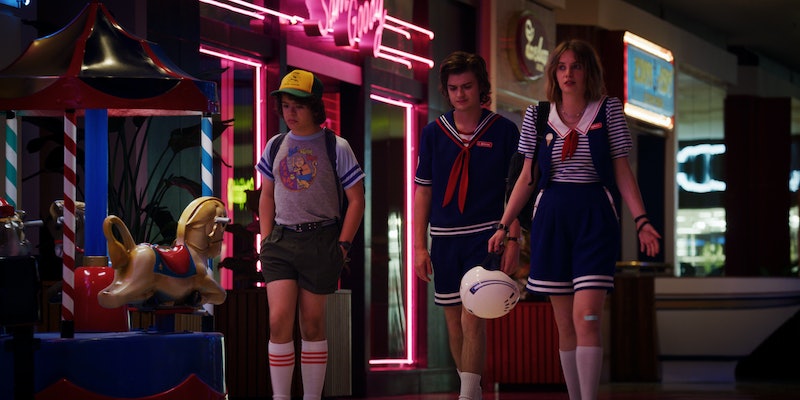 Spoilers ahead for Stranger Things 3. When the first trailer for Stranger Things 3 dropped, it contained a a ton of ambiguous hints that sent fans into an investigative frenzy. None of the main characters are featured. Instead, it contains clips of Dick Clarke's New Year's Rockin' Eve special circa 1985 and scrolling green code on a retro computer monitor. One of the lines reads, "WELCOME TO LYNX CORP," which of course begs the question, what is Lynx Corp, is it a real company, and what does it have to do with six kids in Hawkins, Indiana?

Below the first Lynx Corp line, the aforementioned code concludes with "RUN PROGRAM SilverCatFeeds." Fans immediately theorized that the lynx, which happens to be a wild silver cat, is representative of Russia, considering the story is set in the late years of the Cold War and when Eleven was held captive in Season 1, she was used to spy on Soviet gatherings. Others pointed out that the Russian word for eleven was also embedded in the cryptic code. All of these connections may seem a little farfetched, but it turns out that, thanks to Dustin's trip to science camp, they're not very far off.

Yep, Dustin returns home from a few weeks at science camp with an ultra high-frequency radio that will allow him to keep in touch with his camp girlfriend, Suzie who lives in Utah. Upon his return home, he forces his friends to trudge up to the highest point in Hawkins and set up the device. He spends hours channeling between frequencies in an effort to reach his summer love, and instead, after the rest bail out of boredom, he interferes — and records — what sounds like a Russian code.

Upset with his uncommitted friends, he takes the recording to his trusted confidant Steve, which by default, reaches his Scoops Ahoy coworker Robin. She doesn't know Russian, but she speaks multiple languages ("My ears are little geniuses!" she says.), and she translates the words in the time it takes for Steve and Dustin to spy on a women's exercise class across the mall. The full code is presented as follows:

"The week is long. The silver cat feeds when blue meets yellow in the west. A trip to China sounds nice if you tread lightly."

A Scoops Ahoy delivery arrives as she's considering what it might mean. She signs the appropriate forms and looks up to read "LYNX TRANSPORTATION" on the delivery man's hat. The back of his uniform reveals a silver cat, and the first domino falls. She deciphers the rest almost immediately. Lynx Transport is delivering conspicuous boxes to an armed guarded dock on the mall's backside. Determined to know what they're guarding, they sneak inside to discover an elaborate underground Russian fortress.

In Hawkins, Lynx Corp is a transport company assisting an undercover Russian operation. A company of the same name does exist in the real world, but the information available on it is oddly vague. According to Lynxcorp.com, "Lynx Corporation is a security consulting company that specializes in secure IoT edge node design & implementation, secure IoT architecture, and training." IoT stands for Internet of Things, or one's network of personal or professional devices that can connect to the internet and communicate with one another. The site also claims that the company has "secure IoT devices, secure IoT architecture" and high "IoT security standards." The team is allegedly "imaginative, experienced, well-informed, and energetic," in helping clients secure their IoT devices and architecture. According to its LinkedIn, it's a privately held company based out of Monument, Colorado.

Basically, there's no connection to Stranger Things. And that's probably a good thing, given Lynx Corp's nefarious mission in Hawkins.

More like this
Yes, 'The Price Of Glee' Is Available To Watch In The UK
By Catharina Cheung
Everything To Know About A Potential 'Lockwood & Co.' Season 2
By Gretchen Smail
All The ’70s Easter Eggs You Missed In 'That ’90s Show'
By Grace Wehniainen
'The Crown' Season 6 Has Suspended Filming "Out Of Respect" For The Queen's Death
By Bustle Staff
Get Even More From Bustle — Sign Up For The Newsletter
From hair trends to relationship advice, our daily newsletter has everything you need to sound like a person who’s on TikTok, even if you aren’t.