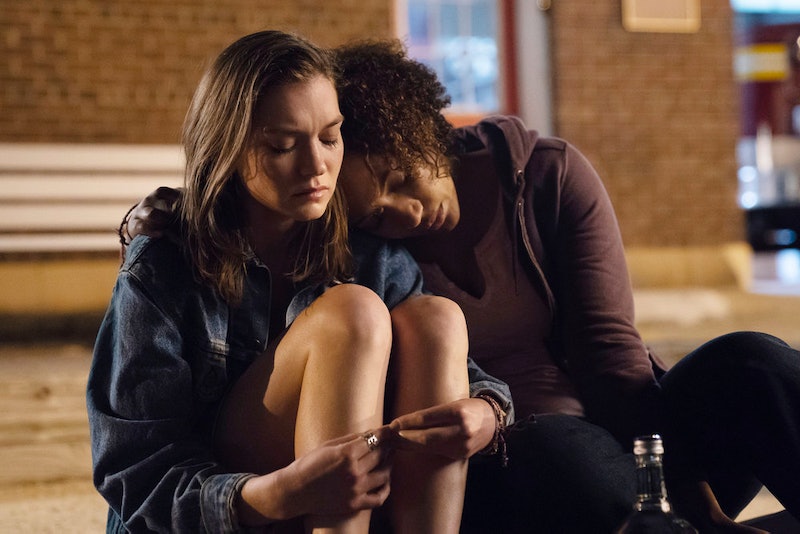 Season 2 of USA's anthology series asks the question, "Why did 13-year-old Julian commit murder?" It's a similar question to the one posed by Season 1 and Cora's seemingly random slaying of a stranger. But Season 2's "whydunnit" is hiding a second mystery: Is Marin still alive on The Sinner? The disappearance of Heather Novack's friend (Hannah Gross) isn't even brought up until the season's second episode, and yet it's shaping up to be the big mystery that the rest of the season revolves around.

While investigating the murders committed by Julian, it quickly becomes clear that this was no ordinary kid on a road trip with his parents. In fact, the two adults the young boy poisoned weren't even his parents; all three hailed from a local rock-worshipping commune; and the murdered couple might have been attempting to flee the cult's insidious clutches. But while searching the compound for evidence, it quickly becomes clear that this isn't an isolated case for Detective Novack: rather, it quickly brings back memories of her close friend (or girlfriend, depending on how you categorize their relationship), Marin.

When they were young, Heather and Marin sneaked close to the commune to giggle at the local weirdos — only, it quickly becomes clear that Marin is more interested in the "weirdos" than she initially let on. She suggests sneaking onto the compound, and when they're caught, she insists she and Heather join their campfire. There, she tosses a necklace into the flames and is eventually led away to see something special in a hut on the property… and it's heavily implied that that's the last time Heather ever saw Marin.

In the present day, while searching the compound, Heather surveys the gathered inhabitants and pointedly asks if that's everyone. When Vera confirms that it is, Heather looks disappointed; clearly she was hoping to spot a glimpse of Marin. So why isn't she there? Is she still in the cult, hidden away somewhere? Or is she dead?

For those hoping to see Marin alive in the present timeline, The Sinner creator Derek Simonds has some ominous news for you. Apparently Marin is "the Laura Palmer of the show," Simonds told Variety in an interview shortly before the Season 2 premiere, referencing the iconic murdered beauty queen of Twin Peaks. And just like the mystery of Laura Palmer's death served as a focal point for that series, the mystery of Marin's disappearance will serve as the focal point for the second season of The Sinner.

"It's actually [Marin's] narrative and what happened to her that all of the other character perspectives are revealing," Simonds revealed to Variety. "That's the mosaic that is coming together" throughout Season 2.

So what did happen to Marin? The Laura Palmer comparisons heavily hint that Marin is dead, and that's certainly possible. Perhaps, like Julian's victims, Marin had second thoughts about joining the cult and was also murdered when she attempted to escape — and Heather's investigation into the cult will eventually yield justice for her missing girlfriend as well.

But there are other, more ominous, possibilities. Marin seemed incredibly eager to learn more about the commune, and didn't hesitate when dropping her mother's heirloom into the fire. It's possible that Marin's commitment to the cult only deepened over time, and she's become an even more integral and influential figure in the years since her disappearance. Julian frequently has nightmares and visions of being visited by a figure in a hood; while most theories about the hooded figure center around Vera and the so-called "Shadow Julian," what if it's actually Marin?

If that's the case, then The Sinner Season 2 could be headed towards a dramatic and emotional reckoning between the dogged detective Heather and the devoted cultist Marin, exes and enemies.