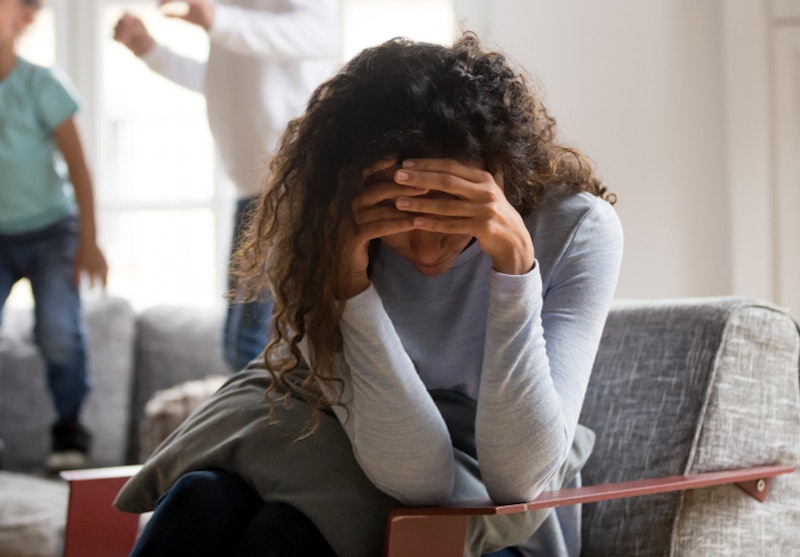 If you’ve ever felt like a complete imposter as a good mom or a good wife, take a deep breath, because, girl, you are not alone. According to new research by Katherine Wintsch, founder and CEO of The Mom Complex, and author of Slay Like a Mother: How to Destroy What’s Holding You Back So You Can Live the Life You Want, motherhood and marriage are making women feel insecure. What’s more, millennial moms in particular are overwhelmed by feelings of self-doubt about how they’re showing up in their marriages, according to Wintsch's research. But many of these women are keeping their feelings to themselves, which is why research like this helps bring to light the fact that so many people are feeling this way — and creating awareness is how moms across the country can start taking the steps to improve their mental health.

Wintsch tells Bustle she spends “most of my waking hours studying the lives of mothers,” including research involving more than 10,000 moms in 17 countries. Her latest survey, involving 1,000 moms in the United States, found that self-doubt permeates the lives of moms all over — no matter what language you speak or cultural differences there might be.

“The reason that [self-doubt] strikes younger moms so much is that they’re just in the thick of the chaos of motherhood,” Wintsch tells Bustle. “Eight out of 10 births in this country are to millennials moms.”

Wintsch is no stranger to feeling self-doubt as a wife and mom. She says she went on her own two-year, intensive self-help journey to slay what she calls her "self-doubt dragon." Her journey involved therapy, working with a life coach, meditation, and watching re-runs of Oprah because she connected so much with the pain the guests were discussing and sharing.

Wintsch wanted to share that journey with other moms to help them slay their own self-doubt dragons, so she and her team created a video in which they asked moms to write down the last "terrible thing" they said to themselves. Bring Kleenex, because it's one thing to read a set of stats about people, but it's pretty hard not to be confronted by your own dragon while listening to these women talk about themselves.

One woman says about herself, "You're a broken person that barely anyone can stand." Another says, "You're too weak and emotional," and yet another woman tells herself that she'll always be "mediocre." But Wintsch doesn't let the participants leave it at that. She then has them tell each other what their thoughts were, getting them to start a conversation about how they're not alone in their self-doubt.

"Nobody wants to admit that they're the only one," Wintsch tells Bustle. "I think that they're hesitant to come out and say, 'hey, [...] I don't know what I'm doing,' and so they feel like they're falling short. [...] The truth is with life in general, all of us struggle, but we suffer when we beat ourselves up because we believe we're the only ones struggling, and that's what dips us down into suffering."

There's evidence that depression in young mothers might be on the rise, according to a 2018 study published in JAMA Network Open. The study used data collected from a two-generation group of women in England and found that millennial women are 50 percent more likely to experience depression than they were 25 years ago, The Cut reports. But the researchers say this could be because there's less stigma around mental health, says The Cut, and people are just more open to talking about their mental health.

Regardless of whether the depression rate has changed, there's also research that has found moms are overwhelmed by the invisible labor of motherhood, The Independent reports. Not all moms have partners or are married, but even if they are in a relationship, the burden of managing family life typically falls on mom, says The Independent, and that can take a toll on anyone's mental health.

No matter where you are in your life — if you're single, married, a mom, not a mom — Wintsch says you can do the work to heal from self-doubt. "You're not at war with other women; you're at war with yourself. This is an internal battle that cannot be healed externally," Wintsch tells Bustle. "You are in charge. You get to decide whether the mojo pumping through your veins is filled with self-doubt or filled with compassion."