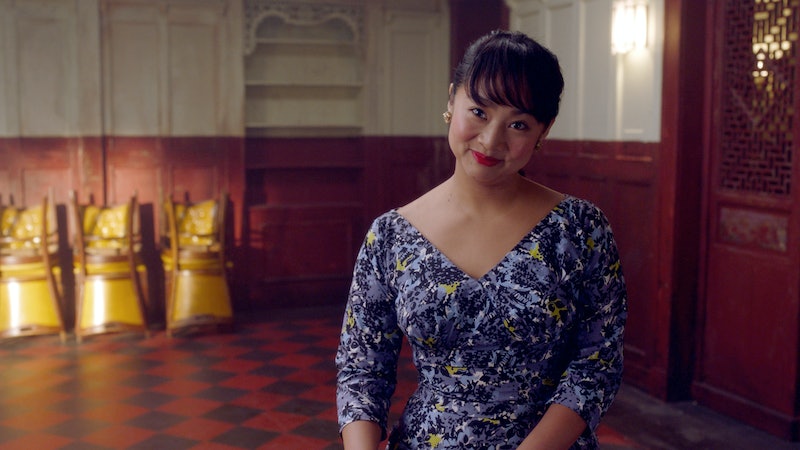 Spoilers ahead for The Marvelous Mrs. Maisel Season 3. One of the most interesting new characters in The Marvelous Mrs. Maisel Season 3 is Mei Lin, a wry, quick-talking Chinatown resident who becomes Joel's new love interest. Unlike several of the show's main characters, Mei doesn't appear to be based on a real person, but she does call to mind a long tradition of Chinese-owned Chinatown lounges and nightclubs.

Despite Mei being linked to essentially the lead male character in Marvelous Mrs. Maisel, the details about her are pretty scant. We know her full name is Mei Lin, that she's likely a first or second generation Chinese-American (judging by her lack of an accent and fluency in English), and that she's currently attending medical school. She doesn't seem to be in charge of the massive gambling den below Joel's new club, but she's clearly the go-between for the Chinese patrons and any English speakers who unknowingly wander through. She's smart and spunky, and for whatever reason, she finds Joel charming.

The line about medical school doesn't do much to identify who Mei could be based on in real life, since there isn't a ton of early documentation about Asian American women in medicine, and there's certainly no famous 1960s doctor named Mei Lin. As early as 1849, Elizabeth Blackwell became the first woman to get a medical degree in New York. And according to a study by Paul Jolly, women were 7.3% of medical school applicants and 7% of accepted students in 1960. However, Jolly's chart shows there were basically zero minority applicants in 1960, so Joel is technically not wrong when he says he's never heard of a Chinese American woman becoming a doctor. (Though Tsai-Fan Yu, a physician who helped discover the primary cause of gout, was doing the majority of her research in the 1950s and 1960s at Mount Sinai Medical Center.)

There's a possibility that Mei will eventually gain fame as a nightclub owner, but that's assuming she and Joel stay together and run the lounge together (and can we really trust he and Midge won't just find their way back to each other once more?). It appears there was no "legendary" New York comedy club founded in Chinatown during the '60s (sorry, Joel), nor was there one owned by a Mei Lin, but there were several clubs in San Francisco that Marvelous Mrs. Maisel may be paying homage to.

Named "the birth place of the largest district of Chinese-owned nightclubs" by Collector's Weekly, San Francisco boasted several grand lounges like Forbidden City, the Chinese Skyroom, Club Mandalay, the Kubla Khan, the Lion's Den, and Club Shanghai. Aesthetically, they all sold the Western image of Chinese culture, from pagoda roofs and rice paper lanterns to female performers in cheongsams, while still offering American meals. The entertainment ranged from burlesque dancing and tap dancing to comedy acts and band performances.

Interestingly, SFGate reports that Charlie Low, the owner of Forbidden City, often had to recruit Japanese, Korean, and Filipino entertainers to pretend to be Chinese, as many Chinese parents did not want their children, and especially their daughters, to be risqué performers — something that Midge herself experiences with her own family and community. These Chinese-owned clubs were wildly success from the 1940s to 1960s, but many had shut down by the 1970s.

Is Mei's storyline with Joel a reference to this history? Possibly! Exploring the club scene in that era is relevant to The Marvelous Mrs. Maisel even if Mei and Joel's romance fizzles out. Really, it's only fitting that as Midge's career expands domestically, the show pays tribute to all of the other performers and creators making their way in America too.

More like this
Every 'That '70s Show' Character Who Returned For The Netflix Spinoff
By Grace Wehniainen
ITV's 'Maternal' Was Inspired By A Very Simple – & Unanswerable – Question
By Maxine Harrison
Ashton Kutcher Wants Danny Masterson “To Be Found Innocent” In Rape Retrial
By Jake Viswanath
'The Queen’s Gambit' Season 2 Tweet Wasn’t From Anya Taylor-Joy
By Mary Kate McGrath, Jack Irvin and Grace Wehniainen
Get Even More From Bustle — Sign Up For The Newsletter
From hair trends to relationship advice, our daily newsletter has everything you need to sound like a person who’s on TikTok, even if you aren’t.