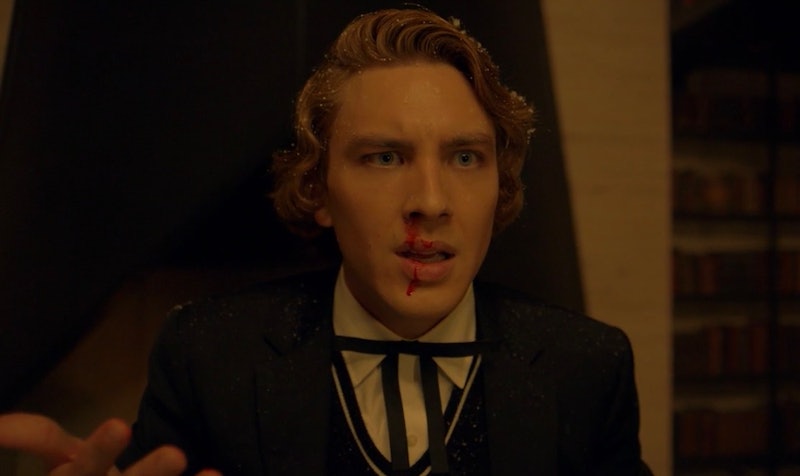 Wednesday night's episode of American Horror Story brought back a few familiar faces from seasons past, took viewers on a throwback trip to a certain disturbing hotel, and explored a ton of Michael Langdon's backstory. But while it did provide a lot of answers, it also raised one very important question: Is Michael the Alpha on AHS: Apocalpyse? Or is he actually the Antichrist, as fans have long assumed?

Through flashbacks, this week's installment gave viewers a bit more context about how Michael came to be the person (warlock? devil?) he is today. He was raised by someone resembling Kathy Bates' character, Mead — not his adoptive grandmother, Constance, as was previously believed — before displaying enough supernatural ability that he caught the attention of a school for warlocks. The warlocks then brought him to their academy — the very same facility that now serves as the Outpost — to observe and test his powers. But they soon realized that he's capable of much more than anyone else in the school, and in fact, anyone else they'd ever seen.

With that, they began to think he might be the "Alpha," the most powerful of all the witches and warlocks — even more so than the Supreme. In order to confirm their suspicion, the warlocks set a meeting between themselves and the Coven witches, including the reigning Supreme, Cordelia (Sarah Paulson).

A skeptical Cordelia insisted that no man's powers have ever come close to the Supreme, explaining that "testosterone inhibits access to the ethereal realm," and that men are genetically inferior to women when it comes to magic. Then, feeling they'd wasted their time, she and the witches moved to leave.

Upon exiting the facility, however, Cordelia came face to face with Michael and collapsed. Whether that was because of his sheer presence, because he was accompanied by two other (and previously dead) witches she knows, or both, one thing is clear — Cordelia was thrown off her game, and that's cause for concern.

At this point, the depth of Michael's powers is still unclear, as is his exact nature. The assumption heading into Season 8 was that, as the son of Vivian Harmon (Connie Britton) and Tate Langdon (Evan Peters), he is the antichrist — especially considering Billie Dean Howard (also played by Paulson) explicitly said so in Murder House. "This piece of paper reveals the precise nature of the Antichrist. 'A child born of human and spirit will usher in the end of times,'" she explained. "It is the essence of evil. A perversion of the immaculate conception."

Given that spooky introduction, plenty of fans are convinced that Michael is just fooling the warlocks, and that his powers are far more complex than anything they're capable of. "Anyone else thinking Michael’s powers are just Antichrist related and he isn’t technically a warlock?" Reddit user Rman823 wrote.

Others quickly agreed, with some even suggesting that he was purposefully infiltrating the warlocks' school from the beginning. "I 100% believe he’s playing these guys," another user, bigfatgato, wrote. "Pretending to be innocent... but he’s way more evil and scary than any of these warlocks could even want to be."

It seems unlikely that the Antichrist thread is a throwaway or a red herring, especially with how much groundwork has been laid for that plot. But there's still no telling just how different he is from the Alpha, or how much more powerful than witches and warlocks the Antichrist would be. In the show's current timelines, the witches seem ready to take Michael down for good, but only time will tell how their powers will truly match up.

More like this
Emilia Clarke Shares More Details About The New 'Game Of Thrones' Series
By Maxine Harrison
“The Door Is Always Open” For Another 'Breaking Bad' Spin-Off, Says AMC Boss
By El Hunt
The Stranger Things 4 Soundtrack Spans Classic Eras & Styles
By Brad Witter
Everything To Know About The Flash Season 9
By Brad Witter
Get Even More From Bustle — Sign Up For The Newsletter