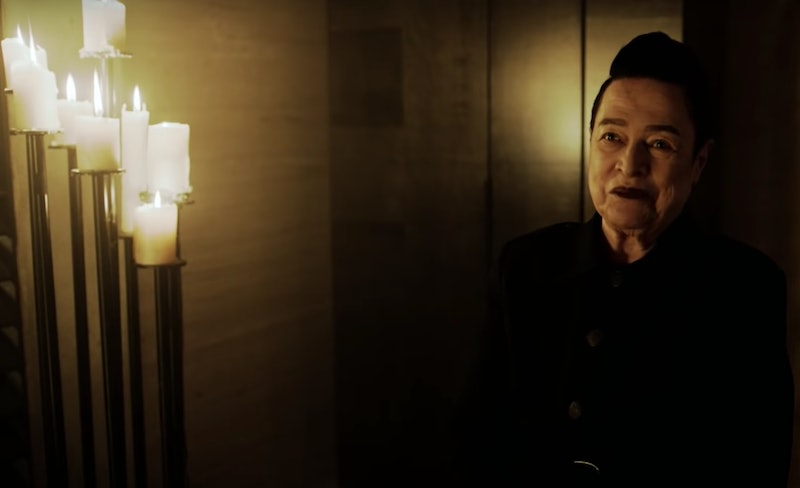 Every episode of American Horror Story is filled with twists and turns, but last week's episode left fans absolutely reeling. On top of all the other dramatics going on in Outpost 3 (Poison! Witches! Resurrection! Oh my!), one of the biggest revelations was that Miriam Mead is, indeed, a robot. And not only that, but one modeled after someone very close to Michael Langdon. Fans have already begun guessing who this mystery person could be, and one answer in particular seems to be the most likely — that Mead is actually Constance Langdon on AHS: Apocalypse.

Let's examine the clues, shall we? For those that need a refresher (Murder House was a full seven years ago), Constance is Michael's paternal grandmother, played by Jessica Lange all the way back in AHS Season 1. Even though Billie Dean Howard (Sarah Paulson) said Michael was maybe, very possibly the antichrist, Constance cared for him deeply: After he brutally killed his nanny as a toddler, she immediately comforted him, smiling as she asked, "What am I going to do with you?"

Cut several decades into the future, and Michael has arrived to wreak havoc on Outpost 3. Up until Episode 3, Mead had been loyal to Ms. Venable (also Sarah Paulson), and after it was confirmed she was a robot, she started sharing her life story. She told Venable that, though technically a machine, she had vague memories of someone she once loved. "I remember a little boy," she said. "Beautiful blonde hair. I took care of him. I can feel the love I have for him. But when I turn to look at his face in my memories, he's just a blur. I loved him. But I must have lost him in some way, because every time I think of him I cry."

This likely perked the ears of a few longtime AHS viewers, who may recall that Michael Langdon was a young, blonde-haired boy at the end of Season 1. Later in the scene, however, Venable asked if Mead had ever seen Michael Langdon before, and she said no.

That all changed when Venable and Mead, having successfully poisoned the rest of Outpost 3, went to confront Langdon, kill him, and steal his computer. But instead of shooting Langdon, as was the plan, Mead turned and shot Venable — much to Mead's own surprise. "I don't know why I did that," she said tearfully.

Langdon then revealed to Mead that she has actually been programmed to be loyal to him, not Venable. "You're not just a machine. Not to me," he told her. "When I tasked the Cooperative's R&D department to have you constructed, I gave them a prototype to model...Of someone from my childhood. Someone very dear to me."

A wave of recognition washed over Mead. "The beautiful boy," she said. "That was me," Langdon answered. "I lost you and I couldn't bear it. I can't imagine a new world without you by my side. The only woman who really understood me."

Langdon's speech to Mead strongly indicates he could be talking about Constance. She was the one who raised him, even in spite of his murderous impulses, so if there's any woman who understands him, it's her. All of which means Kathy Bates could be playing a robot that is playing Constance Langdon, played by Jessica Lange. Mind, consider yourself blown.